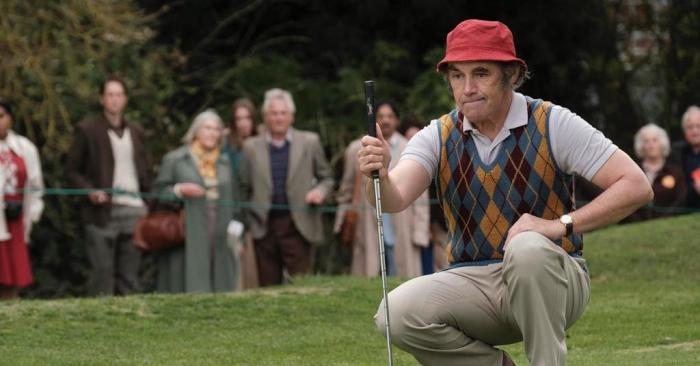 Review: Golf Underdog Biopic ‘The Phantom of the Open’ is a Classic British Comedy, For Better or Worse

Everyone loves a scrappy underdog, but not quite as much as we love an endearing loser. Few did it quite so spectacularly as Maurice Flitcroft. The shipyard worker decided to live his very recently discovered dream of becoming a professional golfer at the age of 48. Despite never having competed — or actually completed a full course — he played in the 1976 Open Championship and landed the worst score in the competition’s history. Soon, the ‘world’s worst golfer’ was barred from competing, but rules have never been much of a deterrent to one with a dream and a few fake mustaches.

If you’ve seen literally any British comedy then this set-up will seem like familiar stuff to you. Over on this side of the pond, we love a self-aware tale of trying your hardest, coming up short, but earning respect for trying your hardest. Think of The Full Monty or Eddie the Eagle, tales of working-class blokes who sought something more than the smothering confines of social disarray. The Phantom of the Open is cut from the same cloth, albeit with a few added flourishes. Really, you could set your watch to the beats of this narrative. Admit it: you read that synopsis and you knew exactly where it was going to go. You can see the wacky shenanigans, the melancholy hopes for something more, the supportive spouse, the stuffy opposition, and the ultimate triumph of good cheer over establishment rules. And there’s nothing wrong with that. There’s a reason the British comedy format is so sturdy. It’s one of our more reliable imports, aside from Eton boys in cravats.

The familiarity of this formula is clearly on the mind of the film’s director. Craig Roberts, who is helming his third feature at the ripe old age of 31 (?!), has already established himself as a serious talent to watch. The seemingly well-worn paths of his chosen stories — black comedy, relationship drama, biopic — are elevated by his willingness to blend moments of the surreal with the mundane. All of his films so far are also extremely British, embedded in working-class communities that neither glamorize nor sneer at such communities. Maurice Flitcroft himself feels like an evident set-up for a lot of cheap jokes but Roberts and his leading man, the inimitable Mark Rylance, clearly have a soft spot for his misguided ambition. His come-to-golf moment is spun into a surreal sequence that borrows heavily from Georges Méliès. While he certainly becomes a topic of mockery to many, Roberts focuses more on how his antics make his friends and community feel brighter. Rylance imbues him with a guilelessness that is believable without sinking into inoperable stupidity. There’s a familiarity to this kind of guy, the old man at the pub who always offers words of kindness to you, even if you find his tales a bit tall. It should come as no surprise that this film is written by Simon Farnaby, one of the Paddington series screenwriters, because Flitcroft shares a lot of the earnestness of Peru’s finest bear.

But, of course, with familiarity comes an inevitable strain of tedium. The film doesn’t carry with it the ambition that Flitcroft did, even if Roberts is keen not to take the most well-trodden path that a story like this would encourage. He’s more visually interesting than his contemporaries while maintaining a sense of what the story needs (looking at you, Tom Hooper) but you wonder how far he was allowed to go here. This is, after all, a crowdpleaser, and any more intriguing film to be made from Flitcroft’s story wasn’t going to shine when mainstream appeal was the primary intention. The main tension comes from Flitcroft’s stepson (a strong Jake Davies) who fears that his dad’s dramatics will hurt his attempts to climb the professional and class ladder at the shipyard that employs them both. There’s a possibility of grit in this subplot, revealing the ways that working-class people are welcomed as the butt of the joke by the media and how it impacts everyone around them. What is it about failure that fascinates the British press so much, and how much of that oh-gee-golly love for Flitcroft was rooted in something genuine? Knowing what we do about this country’s tabloids, I imagine it wasn’t as earnest as The Phantom of the Open portrays it.

The formula also doesn’t allow much for the other actors to do. Spare a thought for poor Sally Hawkins, one of the best actresses in the UK right now, who is left to do nothing but be yet another supportive wife. Roberts used Hawkins to far better effect in his previous film, Eternal Beauty, but here, he and Farnaby don’t even try to give her anything more substantive than gently encouraging speeches for Rylance. It’s a waste of an actress and a reminder as to why sticking to the formula isn’t always such a good idea. At least our token villain, played by Rhys Ifans (with a surprisingly solid Scottish accent, well done to him) gets to growl and crack some jokes.

In fairness, there are great jokes here. Farnaby is no slouch at eliciting hearty laughs or gentle chuckles from his audience, and he’s an absolute pro with this sort of easy-going comedy that will make for great comfort viewing on Sunday nights on BBC 2 during the Christmas period. If you don’t laugh when Maurice accidentally hits a man with a golf club then you’re dead inside. The Phantom of the Opera doesn’t get to stretch out as much as I imagine Craig Roberts would have liked it to but as another example Britain’s preferred cultural exports, it does stand a tad taller than its contemporaries.

The Phantom of the Open is now playing in limited theaters across the US.