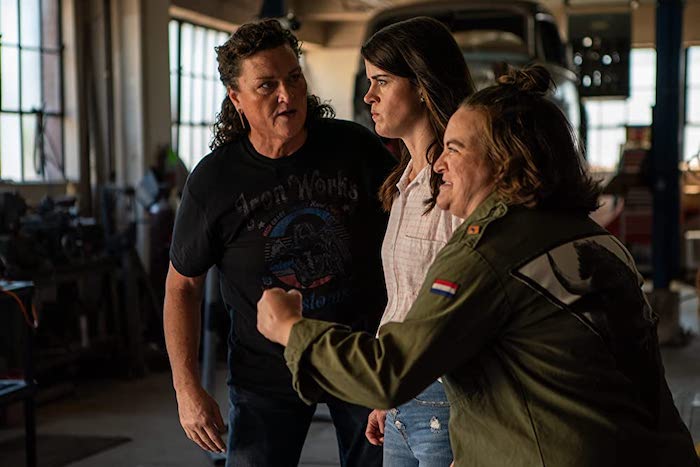 For too long, men have dominated the buddy comedy, even scoring the glowing rebrand of “bromances” in the 2000s. Sure, there are great female friendship movies out there, like Bridesmaids, Bachelorette, Girls Trip, and For A Good Time Call…. Yet, the standard of buddy-comedy still feels defined by bro expectations. Sadly, Golden Arm feels shackled by them.

Directed by Maureen Bharoocha, Golden Arm follows a pair of besties as they go on a quest to win the National Ladies Arm Wrestling Championship. They are an Odd Couple in the Oscar and Felix mold, but gender-swapped. Melanie (Happiest Season’s Mary Holland) is a meek and fastidious baker, whose hard work is not paying off professionally or in her failing marriage. Danny (Betsy Sodaro) is a rowdy wreck, who relishes bar fights and sloppy hook-ups after arm-wrestling matches. However, once injured by the burly Brenda The Bonecrusher (a statuesque and sultry Olivia Stambouliah), Danny needs a new path to the championship and its life-changing cash prize. So, she ropes in her golden-armed buddy, Melanie, with the promise of bonding, fun, and an easy payday. She just fails to mention the arm wrestling until they’re well on their way in Danny’s tractor-trailer.

The arc is exactly what you’d expect from an underdog sports movie. Despite her raw arm-wrestling talent, Melanie struggles with self-doubt. There’s a prolonged training montage, where she’ll learn from a gruff but lovable former champ (Dot-Marie Jones). She’ll make friends and foes, which allows for a welcomed wave of familiar comedy talent, including Greener Grass’s Dawn Luebbe, The Office’s Kate Flannery, Mythic Quest’s Aparna Nancherla, The Good Place’s Eugene Cordero, and ever-chipper comic Ron Funches. A love subplot will blossom to urge Melanie toward confidence, while a hurtful revelation will wound her relationship with Danny. Then, there will be a physical injury to overcome, leading to the showdown between the Bonecrusher and Melanie, who has finally found her footing in an empowering arm-wrestling persona.

Screenwriters Ann Marie Allison and Jenna Milly follow cliché so closely that Golden Arm is suffocatingly predictable. The only innovation as Melanie and Dany bounce from one grimy dive bar to the next is that they are women. It’s easy to imagine this script could have been tailored for Chris Farley and David Spade or Steve Martin and John Candy. The neurotic and the nincompoop formula doesn’t fully fit Holland and Sodaro. The former has been a scene-stealer playing weirder roles in Happiest Season and Greener Grass. Here, she seems crudely hemmed in as Melanie, an underbaked role that feels like Kristen Wiig’s Bridesmaids heroine minus the tendency toward comical meltdown. As for Sodaro, she has the wild energy needed for the lovable oaf role. But her one-liners (whether scripted or improvised) feel more slapdash than outrageous, relying on childish insults involving buttholes and other orifices.

Golden Arm can’t seem to decide between silly and sincere, so muddles in between. There’s certainly a thrill in getting to see women—especially those known for comedy—taking on roles as ruffians. However, the film lacks the courage of its conviction by treating arm wrestling as difficult yet ludicrous. Though the quest at its core is presented as wacky, Bharoocha doesn’t embrace that in style. This might have been more exciting if the style was pushed to the parody levels of The FP, a comedy that re-imagined the gang dramas of the ’80s centering around Dance Dance Revolution face-offs. More bells and whistles might have made this otherwise mediocre story dazzle. As it is, there are a lot of bits that go nowhere, wasting the promise of such a talented ensemble. In the end, Golden Arm shows a lot of spirit but falls short of being a winner.

Golden Arm comes to theaters and digital on April 30.

← It's Always the Ones You Most Suspect | Review: Glenn Close and Mila Kunis Face Off In The Addiction Drama 'Four Good Days' →