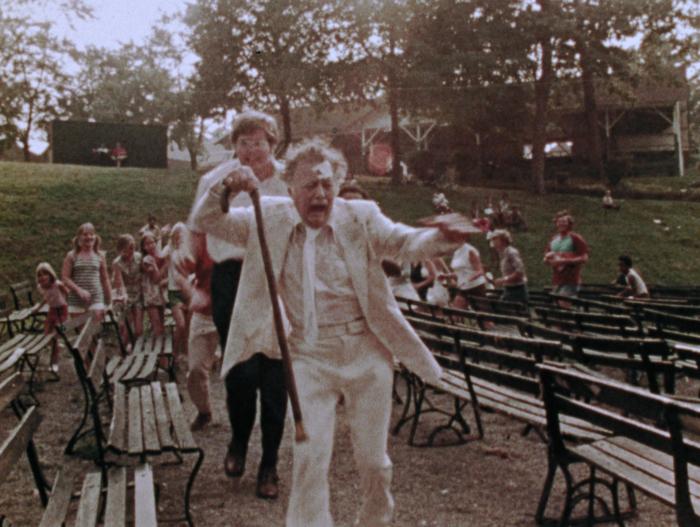 Now on Shudder: George A. Romero's Lost Film 'The Amusement Park' Is Here To Terrorize Us To Death, And Ever After

The human race has had a hard few years. I’m hardly alone, finding myself knocked down by wave after wave of disillusionment. I previously thought of myself as somewhat cynical in the Gen X “whatever” sense, but the last year in particular’s proven a stiff slap across the face with the realization that ‘Oh baby, you actually had no idea how bad your fellow people can be.’ Look no further than the shrug with which COVID was met by a lot of folks when it was realized the disease was mostly terrorizing the elderly and already-sick. A loud section of humanity decided it was more important for them to eat corndogs at a baseball game than it was for Grandma not to choke to death all alone on her nursing home cot. I do believe a little inside piece of me actually loudly broke, to never be fixed.

Maybe I was slow on the uptake, but Romero always knew.

A Nostradamus of collective humanity’s horrors, the legendary film director and social critic, George A. Romero exhibited them first in 1968 with his classic zombie tale Night of the Living Dead, which is really more about an American community’s apocalyptic disintegration then it is about them delicious brains. Romero saw us for what we were with stark cutting clarity, and his aim barely wavered for five straight decades. He spent his entire career splitting us open and spilling our guts across the movie screen. And like so many of his characters once those guts were out there for everybody to see we couldn’t shove them back in, no matter how hard we tried. At their harshest corners, to watch a Romero film is to shrivel up under its merciless scrutiny.

Of course, Romero died in 2017—R.I.P. Uncle George!—but it turns out he’s not done vivisecting our bottomless bullshit after all, bless him. Like a whaddya-call-it, one of them things that rise up from the grave, he’s come back to deliver yet another prescient message unto us about our absolute nonsense, a Klaatu-ian warning for us to change our ways, with his “lost” 1973 “film” The Amusement Park. It might be forty-eight years after its making but somehow, eerily, this thing is right the hell on time for when we need to hear it.

I had both “lost” and “film” in quotation marks there because neither are entirely true, at least by their strictest definitions. In 1973, The Amusement Park was commissioned by The Lutheran Society as an industrial film, the kind that taught people not to drink and drive back in the day; this film’s original specific purpose was to alert us to the dangers of elder abuse. How the Lutherans came to hire the infamous director of Night of the Living Dead for this project, one’s mind can only boggle over. But they did, it was made! And then it was immediately shelved for being too freaking weird for their purposes. Forty some years later the Torino Film Festival was doing a retrospective on Romero and dug up a copy. A couple of years later, after he’d passed, his widow Suzanne Desrocher-Romero decided to clean the thing up and gift it to his fans, a small but in no way insignificant curio of a master’s early experimentations.

At under an hour, The Amusement Park feels more like a particularly didactic episode of The Twilight Zone than it does a feature-length anything. The origin and purpose of its making definitely feels vital for you to know going in, because on its own, I don’t know that The Amusement Park would walk quite straight. Like the creepy creatures Romero defined, it’s got more of a shuffle. It stars the Colonel-Sanders-adjacent Lincoln Maazel, otherwise known for Romero’s 1977 vampire flick Martin, as our narrator and leading man. Here he’s a nameless older gentleman who we watch wander through the surreal setting of the film’s title, clutching a string of game tickets to his chest as he is methodically torn down by the indifferent and cruel crowds in a myriad of ways. So really, a great time’s had by all, is what I am saying.

The power of the film does lay in its purposeful darkness. It stares straight into the abyss of aging and loneliness and it finds nothing but despair. Every person Maazel comes across is a let-down, either through active or passive means. There are gangs of motorcycle thugs, sneering waiters, and petty thieves. Then, in the middle of all the horror, it’s the momentary respite of a sweet little girl who offers him some fried chicken that truly becomes the straw that breaks the old man’s emotional back. We watch her mother swoop her off, comically snapping their picnic basket closed with a heavy thwok sound, violently snatching a book of nursery rhymes from his hands. Like most things associated with casual apathy you’d laugh at the absurdity of it if it wasn’t too busy squeezing your heart dry and feasting upon your bones.

Always ahead of the curve, Romero doesn’t stop there. Buried in this thing’s flesh is commentary on both Race and Class to boot; so attuned was he to the root causes at hand he couldn’t help being intersectional even before that was really a thing.

A passage set inside a clairvoyant’s booth hit me especially hard. There, a starry-eyed young couple in love be shown their horrifying future. In a crystal ball, we watch this future play out before them—turned old and sickly, their once carefree hippie-adjacent poverty becoming a scythe that tears down the center of any possible happy endings. Even worse, Romero then shows how this fore-knowledge becomes not a boon but a weapon, an excuse for even more violence. Like a merry-go-round from hell The Amusement Park reveals base human instinct to be a circular firing squad, a cycle of abuse spinning unmerrily off its axis. Chaos reigns, and we’re all choking on cotton candy.

The Amusement Park debuts exclusively on Shudder on June 8.

← Conan's Cameraman Interrogates Him About His New HBO Max Show | Reddit Asks the Question: 'Women Who Have Been Proposed to and Said No, What's the Story?' →