Another year, another “white man reformed from being racist” film comes our way in the form of Burden. Based on a true story, the film stars Garrett Hedlund as a proud member of the Ku Klux Klan in South Carolina in the mid-1990s, a military veteran whose racism is undermined by the woman he starts dating. On the one hand, this story does provide depth to its black characters, who aren’t treated as superficially as those in Green Book—there’s no “let me teach you how to eat fried chicken!” moment—and fewer scenes build up to corny laughs about racial differences, as they did in The Best of Enemies. But on the other hand, come on, how many of these films must we receive as a culture?

I don’t want to say that admitting mistakes and working to be a better person are impossible, or needless, goals. I would like to be hopeful about the fact that people can grow and progress. But I also hesitate to use the word “redemption” in describing a story like this, as if the person who committed such heinous crimes is the one suffering, and the one deserving of our grace. I don’t know, man. Burden sort of sent me into an existential spiral about what we tolerate when it comes to forgiveness, and what we’ve come to accept, and why this story is the one we keep telling. In my most deeply cynical moments, Burden feels like a movie version of “good people on both sides,” and even solid performances from Hedlund, Forrest Whitaker, and Andrea Riseborough couldn’t entirely shake that.

Burden focuses on Mike Burden (Hedlund, of Mudbound), a 30-something living in Laurens, South Carolina, wrapped in the warm glow of communal racism. Orphaned as a child, Mike lives his entire life under the wing of Laurens’s racist figurehead and KKK leader Tom Griffin (Tom Wilkinson, of Snowden): He drives around in a truck owned by one of Tom’s businesses, Plantation Concrete; he does repossessions for another company Tom runs, chasing down TVs and stereo equipment that people can’t pay off; he lives on Tom’s property deep in the woods, among barns and sheds decorated with KKK and Confederacy paraphernalia; and he’s working with Tom to transform an old theater on main street into a museum for the KKK. What’s inside are pictures of lynched bodies, T-shirts that have cartoon images of white people in KKK robes urinating on black people, pamphlets filled with drawings comparing black people with monkeys—it’s all for sale, and they’re all pretty damn proud of it. 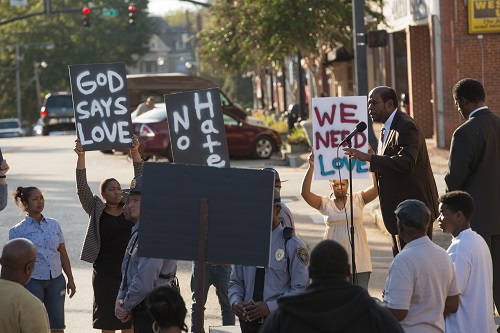 Meanwhile, on the other side of town is David Kennedy (Whitaker), reverend of the New Beginnings Baptist Church. “Love drives out fear,” Rev. Kennedy preaches, and he makes clear that he, of course, despises Tom and the Redneck Shop he’s opened, but his religion and his belief system make it so that he prays for those people, too. He prays for affection and understanding to replace hate, but while he has the support of his loving wife Janice (Crystal Fox), it’s more difficult for his teen son Kelvin (Dexter Harden). How to turn the other cheek, Kelvin reasons, when people like Mike, his close friend and colleague Clint (Austin Hébert), and Tom use the museum and gift shop as a KKK recruitment tool? Urinate on black women walking home from work? Drop the n-word often and relentlessly?

In between those two sides is where Burden finds himself after he meets single mother Judy (Riseborough, of Mandy). She’s an actually “decent person,” Mike is amazed to find, with a son who Mike wants to get to know. But she doesn’t appreciate—understandably fucking so—that Mike is a Grand Dragon in the KKK, or Tom’s thoroughly unfunny racist jokes while the hypocrite eats at a fucking Indian restaurant, or how Tom tries to befriend her young son, gifting him with a knife and instructing him to use it on “dark meat.” It’s either Tom and the KKK, or Judy and her son, she says to Mike as an ultimatum—and the fallout from his decision ends up drawing in the Kennedy family, too. 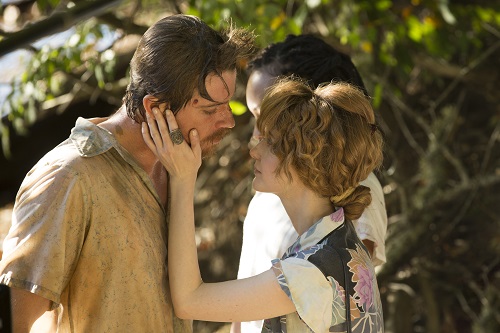 Many of the recognizable elements of this sort of drama are here: extremely terrible white people, patient and forgiving black people, a small town that is split down the middle. These situations of course still exist in this country—hell, we’re seeing Nazis marching on streets, and people have been murdered!—and I can understand the desire to tell a healing story, to communicate a message that makes clear that people can become better versions of themselves. Hedlund sells that transformation well: His physicality here, simultaneously bashful and uncontrollable, with lurches forward and a constant swaying on the balls of his feet, reminds me of his youthfulness in Four Brothers, while the emotional weight and sense of misplacement he carries is very much like his excellent work in Mudbound. As an actor, Hedlund is particularly good at transmitting shame, and to be sure, Mike Burden is given a lot to be ashamed of. But also, as these types of movies go, he’s also given many opportunities to be a good person. We see his love for Judy. We see his love for her son. We see his eventual realization that Tom is a manipulator and a liar. We see his entire emotional journey, and he’s given an interiority that few other characters in the film possess.

That’s not to say that Whitaker is underserved, necessarily; he has a few excellent scenes here, in particular his introduction mediating a racially tinged argument at a big-box store. Whitaker’s Rev. Kennedy carries himself like he’s at the pulpit all the time, so moments when he can be something else—irritated with his son, enraged by Tom, aghast at Mike’s actions—add depth. And to be sure, Rev. Kennedy in real life was an exceptionally astonishing person; I cannot begin to imagine the strength and generosity of spirit he possessed. But: Why isn’t this movie entirely from his perspective? Why isn’t his family the greater focus of this story? Why does this movie take the time to discuss the disenfranchisement that would lead white people down a path of racism without giving as much time to analyzing the racial oppression inarguably present in America’s history?

So much of Burden is well-intentioned, and the movie makes some attempts to link together weighty concepts like classism and racism and sexism in its depiction of the relationships between Mike and Judy, Mike and Rev. Kennedy, Mike and Tom, Tom and Judy, Tom and Rev. Kennedy, all these people with varying, overlapping lines of connection and antagonism and affection. But I wonder with Burden, as I do with so many of these films: Who this movie is for? What is this movie teaching us or telling us about race in America that we don’t already know from decades of history, decades of cinema, and the bigotry and subjugation that still continue to this day? Burden asks us to “rehab hate,” and its ensemble cast sells that message well. Whether it’s a message that still resonates now, though, is what I can’t quite decide. And what version of this movie will we see next year, and the year after that, and the year after that? When will white people stop asking for forgiveness instead of, you know, just not being assholes to begin with?

Burden is now available on VOD and for digital purchase.