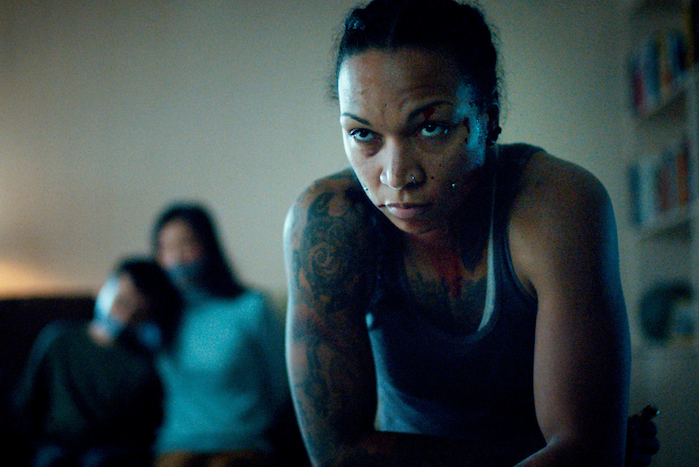 Tribeca Review: Fresh but Flawed ‘Catch the Fair One’ Presents a Brutal Take on Revenge Tropes

There are many revenge films out there, and a fair few dealing with sex crimes, but nothing quite like Catch the Fair One. While there have even been some films dealing with Native women as victims (yes, Wind River, I’m talking about you), the sophomore feature from writer-director Josef Wladyka (Manos Sucias) takes the crucial additional step of actually centering the story around a Native protagonist. Professional boxer Kaylee (real-life boxing champion Kali Reis, who helped write the script) is unable and unwilling to move past the disappearance of her teenage sister Weeta (Mainaku Borrero), presumably kidnapped by a sex trafficking ring. With no progress being made, Kaylee takes retribution into her own hands, going undercover as a potential recruit. While acting under the pretense of searching for Weeta, it’s up for interpretation whether Kaylee actually thinks she might be able to rescue her sister or if her goal might more honestly be described as seeking to inflict pain on those who took her away.

The revenge quest might be at its heart a search for closure, and yet the greatest revenge narratives are fundamentally tales of disappointment—stories in which the retribution sought is not found, or just desserts prove more bitter than sweet. After all, at the crux of the concept is that actions have consequences. To truly embrace that doctrine, it should be as true for the protagonist as the villain.

Catch the Fair One feels like a concept taken to its natural extreme, for better and for worse. The beloved Hollywood trope of the renegade taking justice into their own hands (or, perhaps more accurately, fists) is totally grounded and de-glamorized. It also feels like the sort of film where the aesthetics are in part driven by creative inclination, but also perhaps in part driven by necessity. Several impressive names are behind the film; the producing team includes freshly-minted Oscar winner Mollye Asher (Nomadland) and Darren Aronofsky is among the executive producers. Yet this is very clearly a sparsely financed affair. Nonetheless, it is often remarkable. The film creates a liminal world forever in a blue-grey twilight where fresh snow already looks like sludge. But I couldn’t help but wonder if part of this look came from the filmmakers avoiding a more extensive lighting setup that would be expensive and incredibly time-consuming. (If you’ve ever happened upon a film set and wondered why everyone’s just standing around and what they’re waiting for, nine times out of ten, the answer is lighting.)

Casting non-professional actors in a starring role is a very hit-or-miss venture. Yet Reis makes an impressive acting debut here as Kaylee. The clear advantage of casting a professional boxer pays off in the action sequences. The film hits hardest when Kaylee’s throwing punches, and the nickname Reis shares with the character she plays, K.O., feels accurate on more than one level.

Overall, Catch the Fair One shines in scenes predominated by action. When the story is more dependent on dialogue, things sometimes get a little rockier. Wladyka deserves kudos for resisting the pitfalls of issues films, which tend toward overly expository, PSA-like spoon-feeding. Unfortunately, the script does go a little too far in the opposite direction.

For instance, the tense relationship between Kaylee and her mother, Jaya (Kimberly Guerrero) only really gets one major scene and little context otherwise, making it hard to get invested in their dynamic. In spite of a compelling premise, a solid protagonist, and some well-integrated themes, Wladyka’s script is unfortunately opacity. It’s good to leave drama room to breathe, but Catch the Fair One sometimes leaves too much room—so much that sometimes it becomes a void. A close-up of Kaylee becomes no more than that, a close-up of a face, because there’s not enough context for the viewer to interpret what she’s supposed to be thinking or feeling. It’s moments like these where Reis’s lack of previous acting experience does feel a little more noticeable. Although such sparse material would be a challenge to most actors, regardless of experience level.

In the end, Catch the Fair One does not feel like the best possible version of what it could have been, particularly with regards to the overly thin script. Nonetheless, its shortcomings are easily overwhelmed by its strengths and the fresh perspective it brings to an age-old tale of vengeance.

Catch the Fair One was reviewed out of Tribeca Film Festival 2021.

← Countless People Show Love To Conan On His Last Day | You Are The Worst, 'The Blacklist' →