Zack Snyder’s Justice League certainly is more movie than the 2017 Joss Whedon-completed version of Justice League. More minutes, of course; this thing clocks in at over 4 hours. More cohesive, with greater backstory and characterization for heroes like Cyborg/Victor Stone (Ray Fisher) and Wonder Woman/Diana Prince (Gal Gadot). More gore and death, with heads chopped off and blood spurted and bodies impaled. But more isn’t necessarily better. For all the restorative qualities that the Snyder Cut provides, there’s too much here that’s fundamentally the same. Overly expository, overbaked, overwrought. Take a shot whenever someone says “Motherbox” or a line of Wonder Woman dialogue is just her saying someone’s name and you’ll have alcohol poisoning in no time.

Do I need to go over the backstory for the Snyder Cut? I guess I will, in case you need a slight refresh (or, read Brian’s piece!). Warner Bros. hired Whedon to take over and complete Justice League when Snyder stepped away from the film after his daughter died by suicide. (Snyder’s version includes a nod to the American Foundation for Suicide Prevention, for which Snyder Cut fans have raised hundreds of thousands of dollars.) In years since, Snyder’s fans and Snyder himself have dismissed Whedon’s underwhelming product and instead have been talking about the Snyder Cut, praising the Snyder Cut, promising the Snyder Cut, obsessing over the Snyder Cut. Enough hype built that Snyder got $70 million to make this thing, re-editing in all the footage he had already shot and adding one all-new scene at the end that ties back to another scene in Snyder’s 2016 film Batman v Superman: Dawn of Justice. Whedon’s name is totally gone; Chris Terrio is the only credited screenwriter. The aspect ratio has shifted, and is now in the boxier 1.33:1 (kudos to Snyder for shouting out First Cow; who knew?), and if you need a chronological reminder: Justice League takes place after the events of Wonder Woman, Wonder Woman 1984, Man of Steel, and Batman v Superman, but before Aquaman. I don’t know how to explain characters’ different hair colors or accents; Amber Heard in particular works what sounds like three entirely incongruous voices during this thing. Not all the details add up.

On the whole, yes: This is a more coherent, more cohesive movie than Whedon’s. But there is absolutely no world in which this movie needs to be four hours! None! No reality should accommodate this! This movie is 2 hours of introductions, 1 hour of actual action, 30 minutes of characters having the same conversation over and over again, and then 30 minutes of actual new, interesting stuff! If you wanted to, you could just watch the final hour of this thing and call it good and consider yourself prepared for Ava DuVernay’s upcoming New Gods and what will inevitably be Justice League 2! And I say all this because what Snyder is very clearly attempting to do is make the superhero movie to supersede all superhero movies, the One Cut to Rule Them All. Snyder thinks he can shove this movie in Marty Scorsese’s face and say, “See! Palpable human emotion! Not just amusement park shit!” (Marty would giggle and walk away.) He clearly wants this to be an epic fantasy, a Lord of the Rings or Star Wars, all outsized themes of morality and sacrifice and humanity and trauma. Once Superman flies into the air and strikes the Jesus-on-the-cross pose not just once, but twice, all that grandiosity is pretty clear.

If that’s your thing, go off, I guess. But it remains incongruously done: One moment this film is all Film School Malick, with Clark Kent running his hands through a row of corn, and another moment Steppenwolf is acting like he’s on a tortuous work Zoom call, yelling at his uncooperative technology to synchronize. I’m not saying superhero movies or comic book movies can’t have the range. I’m just saying I’m not sure that Snyder does.

The general Justice League narrative remains in place, although it is now divided into a sort of post-Batman v Superman coda, then six separate parts, and then ends with an additional all-new epilogue. Whew! Four hours, baby! So, after Batman v Superman, which ended with Superman/Clark Kent’s (Henry Cavill) death and Lex Luthor’s (Jesse Eisenberg) imprisonment, Batman/Bruce Wayne (Ben Affleck) has started working with Wonder Woman to form a team of metahumans to protect the world from alien threats. Neither of them is having a ton of luck—Aquaman/Arthur Curry (Jason Momoa) does take off his shirt when he turns down Batman’s invite to become super friends, but it is still a rejection, while Cyborg is equally dismissive of Wonder Woman’s overture: “Fuck the world,” he growls. The only person really into joining the crew is the aimless, desperate-to-please Flash/Barry Allen (Ezra Miller, whose character still ogles Wonder Woman but this time doesn’t deliberately sexually harass her, as he did in Whedon’s version), who is very honest when he tells Batman, “I need friends.” 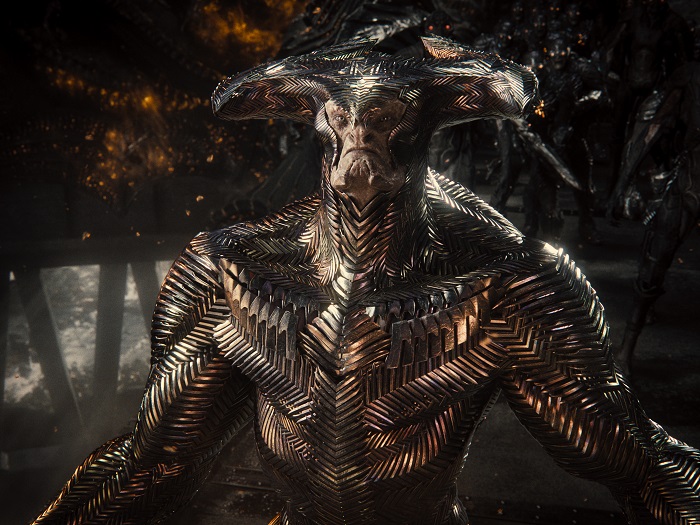 But Aquaman and Cyborg won’t stick to those “no” RSVPs, of course, because the world-conqueror Darkseid is coming, and his warrior Steppenwolf has already arrived. If he can steal the three Motherboxes (lol, lol) hidden around Earth and synchronize them (lol, lol) into the Unity, then he can terraform this world into one just like Darkseid’s, killing everyone and wiping out humanity as we know it. The Amazons have one, the Atlanteans have one, and the humans have one. And one by one, they fall—with the battle between Steppenwolf and the Amazons actually being a better depiction of Themyscira than anything in WW84, although Snyder’s tendency for bra tops and microminiskirts remains unbeaten—until the Justice League finally begins to work together. Oh, and Superman? Well, if a Motherbox can do anything, maybe it can do a little necromancy, too?

I am not a monster, so I will list the things the Snyder Cut does well: His version of Diana Prince, although always sexualized in outfits that are so tight that I legit winced, actually has a connection here to her Amazonian heritage and to defending her mother and her sisters that WW84 infuriatingly lacked. Gadot is still the worst performer in this cast, horrendously wooden and relegated to exhaustively expository dialogue, but at least her character feels fuller.

The same goes for Fisher’s Cyborg, who gets an entire backstory that was left on Whedon’s cutting-room floor. His relationship with his father, who brought him to life twice, rushes toward a tragic, satisfying conclusion that replaces one of the 2017 version’s stupider moments. Does that make up for the film’s really horrendous dialogue for this character, which is mostly relegated to Cyborg literally talking to machines and their AI? (“This one’s saying she can’t fly because of a software issue, but I can fix it with a little time,” he says of a ship.) Not so much, but again, at least the restored content helps Cyborg feel more nuanced and more tangibly like a member of this team.

Um, other good stuff, other good stuff … The opening scene, in which Superman’s dying scream reverberates throughout the whole world, is appropriately weighty. The Parademons are still spooky. At one point Affleck’s Batman has greying longish hair, a salt-and-pepper beard, expensive-looking aviators, and a chunky turtleneck sweater, and I might have been aroused by this George Clooney cosplay!

But then there’s, you know, all the other stuff. The color palette in this thing is still grim, everything filtered through murky grey, and there is some really garish lighting during a few scenes that makes everything onscreen looks blown-out and artificial. Snyder knows how to stage a fight scene, although nearly every one of them is bogged down by a slow, mopey song, and the action itself lacks a sense of physicality; it rarely feels like everyone fighting together is doing so in the same actual real space. Although the lava-dripping DeSaad is appreciably foreboding, the character design for both Steppenwolf and Darkseid is still mad corny, and the final action sequence in Chernobyl is so dark as to be impenetrable. The dialogue remains astonishingly lame, all surface-level “Here’s our plan” stuff from Batman or “Here’s the history of this” stuff from Diana. The movie never finds a way to incorporate the backstory of Steppenwolf or Darkseid without interrupting the forward flow of the main narrative, although comics fans might be pleased by the seconds-long cameos from Green Lantern Yalan Gur and Granny Goodness. And, you know, God forbid Lois Lane (Amy Adams), who the film reminds us is “the key” to a future narrative, be given any characterization at all past “widow who still wears four-inch high heels and blows out her hair to get coffee every morning.”

“So many of these scenes are paintings rather than cinema,” I wrote in my notes, and look, call me pretentious for using the actual word “cinema” in my notes! I can take that! But ultimately, Zack Snyder’s Justice League feels like Snyder surrounding himself in all the markers of an important movie—long runtime, different aspect ratio, religious imagery, existential themes—without actually digging into what about those things an important movie requires for cultural resonance and relevance.

How is the world affected by Superman’s return? By Batman’s wealth? (I bring this up not just because of my personal “eat the rich” philosophy, but because the movie itself uses his wealth as a narrative crutch.) By Cyborg’s ability to interface with every machine on the planet? By Flash literally turning back time? By Aquaman’s, um, hotness? By Wonder Woman’s sense of hope? Snyder situates all of these individuals but then fails to grasp how the world is changed by their coalescence, and so the Snyder Cut remains incomplete, even as it claims to capture everything the filmmaker wanted to say. He’s getting himself in the right headspace to adapt Ayn Rand’s The Fountainhead, I guess: all sturm und drang, but not enough substance.