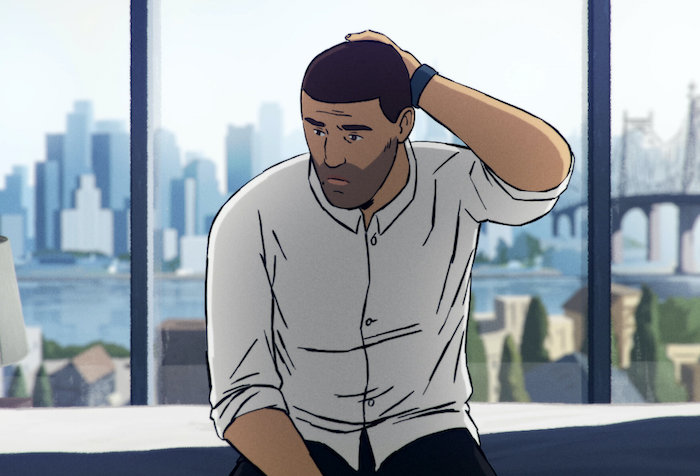 Review: 'Flee' Paints a Moving Portrait of a Refugee's Search for Home and Belonging Despite Some Creative Confusion

Plenty of documentaries use animation as a tool, for embellishment and explanation, to supplement archival footage and talking heads, or to graphically illustrate a concept. But the truly animated documentary—that is, a documentary that is overwhelmingly or entirely animated—is a rare breed, particularly in the feature-length space. Rare, but remarkably prestigious; from Ari Folman’s Waltz with Bashir to Keith Maitland’s Tower, the handful of titles that do exist are an incredibly accoladed bunch.

Jonas Poher Rasmussen’s Flee is no exception to this general rule, and for good reason. Like many animated documentaries, the story is a deeply personal one narrated by a series of conversations between Rasmussen and his friend and former schoolmate Amin, an Afghan refugee (name changed along with several others to preserve anonymity). Amin, now a scholar living in Denmark with his fiancé, recounts his childhood in Kabul, ended prematurely by civil war and his father’s disappearance at the hands of the Mujahideen, his subsequent escape to Russia, and his long and grueling road to finding any sense of home or belonging again. The film begins with Amin defining home — “somewhere safe… it’s not someplace temporary” — and spends just long enough exploring Amin’s childhood home to make its subsequent destruction and the sense of loss that permeates the rest of the film, fully effective.

Flee is a perfect story to tell as an animated documentary, but it somewhat frustratingly fails to truly use the animation in a particularly effective way. “The medium is the message” generally feels no truer than it does when it comes to animated documentaries, but Flee, particularly in comparison to some of its cohorts, does not always take full advantage of the medium to further its message. To be clear, the animation is beautiful, but the story here at times works more in spite of the creative choices being made instead of because of them. The way in which archival footage and multiple animation styles are scattered throughout to taste, for instance, really speaks to the way the animation here often feels more like a stopgap for non-existent archival footage and a means to preserve anonymity than anything else.

Compared to the most creatively remarkable examples of its kind, Flee treats the use of animation like an act of necessity more than a narrative tool that in fact presents its own unique strengths and advantages when it comes to handling such a personal story. In individual moments the animation is often used to great effect, but the approach throughout lacks the sort of underlying intentionality that takes the best animated documentaries to the next level—there is a lack of consistency in the approach to the animation, of cumulative meaning. The individual parts are great, but the sum is not greater.

Flee too often seeks to mimic reality in its animation as opposed to seeing the freedom of animation as a means to explore emotional truths, the way it is in documentaries like Waltz with Bashir or Chris Landreth’s Oscar-winning short Ryan. This becomes particularly apparent through Flee’s intermittent use of archival footage—it almost begins to feel like the film is trying to prove its documentary status, a strategy coming from a place of insecurity or even defensiveness, like the animation is a weakness for which the film must compensate. When it comes to psychological realism, the boundless possibilities of animation very much present an advantage, but disappointingly this film does not always treat it as such. To be clear, sometimes it does—a moment when Amin’s poster of his celebrity crush Jean-Claude Van Damme shoots him a wink, for instance—but other times it very much does not, flip-flopping between prioritizing Amin’s subjective lived experience and gunning for a more rigid verisimilitude.

It does not help that the live-action archival footage generally shows up in moments when the documentary is pulling back from Amin’s story. The film’s aim to educate the audience and provide context is commendable, but the actual context itself is so complicated and nuanced that the efficacy of these asides is limited; ultimately, it only has the space to paint a very scattered picture of the greater situation while straying from Amin’s personal journey, where all the documentary’s strength lies.

The most compelling parts of the documentary truly focus on Amin himself, the anecdotes with the sort of texture and detail and emotional resonance one will never find in a more bird’s eye view approach: Amin’s journey in discovering and exploring his sexual identity; the way he describes whittling away the days in Russia watching Mexican telenovelas, not knowing what the future will hold for himself or his family; a heart-poundingly tense incident involving a little boy with light-up sneakers while sneaking across the border.

Flee is a compellingly earnest and moving portrait of a refugee’s journey, of seeking home after the most violent and upsetting kind of displacement, of navigating the traumas of the past and how they reverberate in the present. It is an incredibly powerful message, even if the film itself sometimes fumbles in how to best use its medium in service of this message. It’s a commendable achievement that is undoubtedly one of the best documentaries of the year, if perhaps not the best possible version of what it could be.

Flee is now playing in theaters.