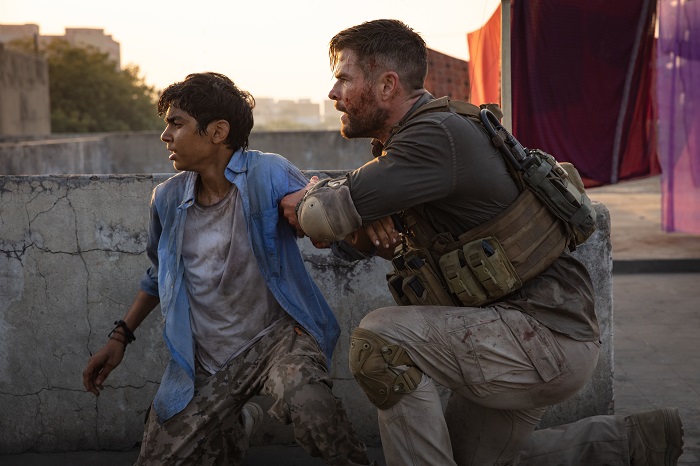 Let me start with the nice things I have to say about Extraction, because there aren’t that many, and I would rather get them out of the way first. Chris Hemsworth is tall. There’s a scene when he’s standing directly across from his Bangladeshi captors, and they’re a foot or so shorter than he is. What wimpy men! Not nearly as strong as our Thor! At another point, Hemsworth’s mercenary character is wearing a Jason Momoa-style tank top that has exaggeratedly large armholes. This is because Hemsworth’s arms are, in fact, very big, and his ribcage is very broad. Good for you, Elsa Pataky! You got a man to buy a castle and you’re married to this guy? Respect. Oh, and finally, Golshifteh Farahani is in this movie in Shiv-from-Succession outfit drag, from the blunt bob to the high-waisted wide-legged business pants. Golshifteh deserves a better career, go watch her in Paterson, but fine, sure, get that money.

OK! That’s it! Those are all the positive things I have to say about Extraction! Let me begin my proper review now by saying: I was exhausted and I was bored. To wit, let me quote myself:

curious to see how many different times netflix can do the "white savior in a third-world country" narrative. three's a trend now: EXTRACTION, 6 UNDERGROUND, and CLOSE. the idea of white ppl in need of redemption rescuing innocents from the evil browns is hella alluring, huh? pic.twitter.com/NH6LGCO0Hw

Because seriously, Extraction is nothing new. Nothing! Much has been made of its 12-minute-long single-take action sequence, and of course we all root for Hemsworth, who is tied in our collective consciousness for second-best Chris. (Because I am a cynical jerk, I’m convinced there are a number of splice points in that “single take,” and if you really want to be impressed, go watch The Body Remembers When the World Broke Open, a movie whose entire run time is presented as one unbroken shot!) But Extraction, the directorial debut from experienced stuntman and stunt coordinator Sam Hargrave and written by Joe Russo, one half of the Russo Brothers (adapting a graphic novel the brothers co-wrote, Ciudad), feels remarkably dated in narrative and distinctly derivative of John Wick in action. Head shot, body shot, Hemsworth sad, brown people bad, head shot, body shot. That’s the rhythm of Extraction, and yes, it’s also a white-savior narrative, because we don’t have enough of those already!

I am being sarcastic. WE HAVE SO MANY OF THOSE ALREADY. NETFLIX IN PARTICULAR IS LEADING THE WAY IN MAKING THIS TYPE OF MOVIE. IS THIS WHAT MY MONTHLY $13 IS FUNDING? ORIENTALISM AND JERRY SEINFELD’S THOROUGHLY IRRELEVANT STAND-UP CAREER? REALLY? 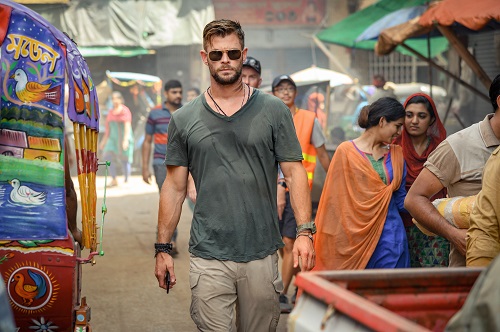 Anyway. So the Netflix preview description of Extraction basically says it all: “Rival drug lords. A kidnapped kid. Impossible odds. What starts as just another mission turns into his best shot at redemption.” Hemsworth stars as the mercenary Tyler Rake (HILARIOUS NAME IS HILARIOUS), who is haunted by memories of a young boy running on the beach, bare feet digging into the sand, his hand reaching out for Tyler’s. Rake lives in a run-down shack in the middle of nowhere in Australia, casually jumps off of cliffs 100 feet up, meditates for extended periods of time underwater, drinks and takes Oxycontin constantly. He’s barely holding it together—but when the son of an Indian drug lord is kidnapped by a rival Bangladeshi drug lord and taken across country lines, the company Rake works for calls him.

The leader of the extraction team, Nik (Farahani), is convinced that Rake is an asset, and to be fair, he finds the kidnapped teenager Ovi (Rudhraksh Jaiswal) quite quickly. He kills the Bangladeshi kidnappers, even shoving one of their faces into a rake. Get it! Like his name! But when his team is double crossed, leaving Nik and Rake as the sole survivors, the mercenary refuses to leave Ovi behind. Sure, the kid is the son of an Indian gangster. He’s innocent, though, and he thinks Tyler is brave, and his earnestness makes Rake have a change of heart. Maybe he can be a better person. Maybe he can atone for his sins. Maybe, if he keeps Ovi alive, he’ll want to live again, too.

Remember when I mentioned Man on Fire? This is just the plot of Man on Fire. And what’s interesting is that Ciudad, the source material for this film that the Russos co-wrote, is set in Ciudad de Este, Paraguay; why wasn’t that location kept for this movie version? Perhaps because that would make this movie even more like the Latin America-set Man on Fire? (In an interview with the Associated Press, the filmmakers claim it was because another Netflix project was looking at Ciudad de Este, but that seems flimsy, to say the least.) So instead the location is transferred initially to Mumbai, India, and then Dhaka, Bangladesh (although they never filmed in that city), and this movie does that thing where it uses a Soderbergh-esque yellow filter to make this place seem as foreign and alien as possible, and makes our villain have a child army so you definitely know he’s evil, and explicitly writes the Bangladeshi government as corrupt and compromised because we have to root for the white savior, and the only way to make Rake our only hero is to make everyone else a villain. (One of the subtle ways the movie does this: How often Ovi speaks English in commonality with Rake rather than his native Hindi.) 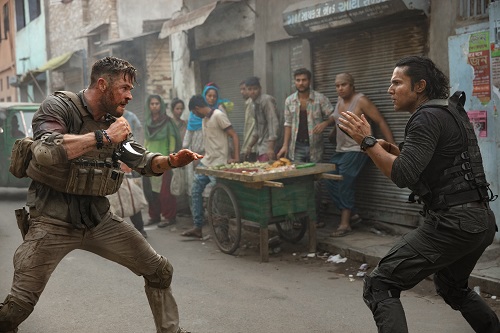 In that same interview with the AP, Hargrave said of Dhaka, “it has an energy and vibrancy that’s unique … You couldn’t look in any direction that’s not unique to the Western eye,” and that’s exactly the kind of quote that makes me roll my eyes and pantomime jacking off. Shame on Hargrave for saying something like that while still making Dhaka yet another one of those personality-less brown countries that is presented only as “crowded” and its people only as “brutal,” the kind of bad guys who throw children off buildings and ask them to cut off their own fingers in fealty. That is in obvious contrast to Rake, who finds it in his heart to care about a boy who is so different from him; obviously Rake is superior, then, to all the bad guys who use these poor children in their drug trade. Rake is better physically and morally and ethically! Do not think too much about what other crap he has certainly done in his life as a mercenary! Just let his heroism wash over you!

The action scenes are fine, I guess, although that 12-minute-long single take has a sameness to it that flattens the technical mastery of the whole sequence. I repeat myself: Head shot, body shot, Hemsworth sad, brown people bad, head shot, body shot. Rake gets hit by a car approximately a dozen times because the Bangladeshi people are bad drivers! That is the message I am taking from this! And although I commend Extraction for casting some recognizable Bollywood actors, including Pankaj Tripathi as Ovi’s imprisoned father and Randeep Hooda as Saju, Ovi Sr.’s second in command, in the entirety of India and in the entirety of Bangladesh, only Saju is presented as a “good” person, and that’s only for a portion of the film.

Look, I’m not trying to say movies should only be about people whose ethical or moral choices are ones we would approve of, or that it’s impossible to empathize with or enjoy movies about bad people. I just wrote in praise of There Will Be Blood, and Daniel Plainview is an awful person, and my favorite movie is The Godfather, another movie about an awful person. But those films had specific points of view and understandable character arcs and engaging aesthetic choices; their explorations of those worlds and those people were not an unthinking endorsement. Meanwhile, nothing about Extraction suggests that it has such self-awareness, and it’s not doing anything within the conventions of this genre that wasn’t already accomplished more impressively or more entertainingly by Man on Fire. Rest in peace, Tony Scott. You deserve better mimicry than this.

← Friends, Today is April 25th, aka the Perfect Date | 'SNL at Home' Returns with Paul Rudd, 'What's Up with That?' and Brad Pitt as Dr. Anthony Fauci →