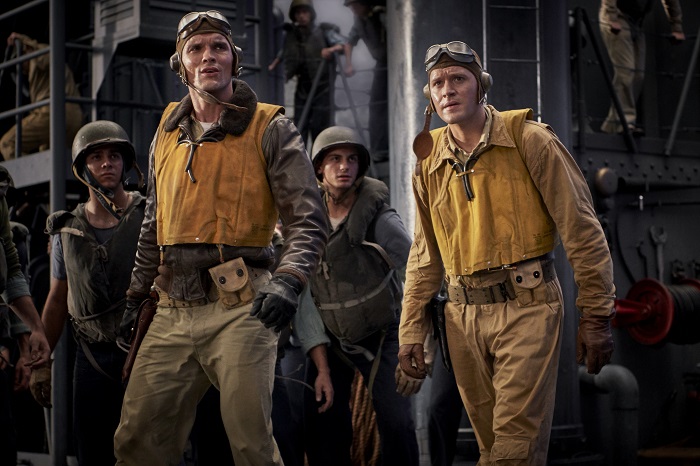 Review: Get Ready for Every Older Relative You Have to Praise ‘Midway’ This Thanksgiving. Prepare Yourself Any Way You Can!

Midway is comfort food for older Americans. I would say it’s comfort food for Boomers in particular, and it might be, but I get very irritated whenever Boomers call every younger person a Millennial, so I’ll abstain from grossly generalizing about them. That is one of the only moments you will catch me being nice in this review of Midway, a movie that exhausted the hell out of me. (And a movie that I attended with a theater full of Boomers, and one baby; I’m sorry, I don’t have more to tell you about why a baby was at a 2 p.m. Friday showtime of this movie.)

Midway is from director Roland Emmerich (and by now, his first box office success in a while, after the duds Independence Day: Resurgence and Stonewall), and it is the kind of movie about American brawn and might that relies on the fact that we know how World War II ended. Since we already know that, the movie doesn’t need to do anything most movies do, like build tension or develop narrative cohesion. This movie could end at least five different times but just keeps on going. Every character is basically just a Strong White Man Defending His Country (the only non-white casting in this film is half-Filipino Darren Criss; brings to mind how Emmerich handled the Stonewall story). Yes, the men played by Ed Skrein, Luke Evans, Dennis Quaid, Aaron Eckhart, Patrick Wilson, and Woody Harrelson, among others, actually lived, and I do not want to discredit their bravery and sacrifice. But Midway is comfort food with no depth, with nothing of substance underneath the glossy, CGI-heavy veneer of “Remember how nice it was when America used to win wars?” 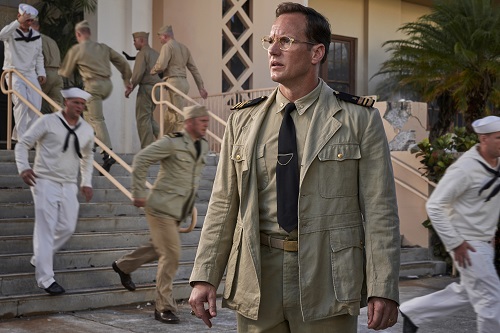 Midway is the “true account of events that led to the most important naval battle in American history,” and it begins in Tokyo in 1937, when U.S. intelligence officer Edwin T. Layton (Wilson) realizes that Japan would not be against attacking the United States. “Nobody wants a war,” Layton says; an intertitle immediately after he says this informs us that four years later, “the world is at war.” And with the Pearl Harbor attack on December 7, 1941, Emmerich obtains the film’s greatest moments of emotional impact by going full disaster movie with his treatment. The attack is devastating and horrifying; ships burn, people burn. The U.S. needs to respond, and the immediate response falls to the U.S. Navy and its Pacific Fleet.

What to do next? Should the U.S. Navy track down the Japanese Fleet and attack? Should they wait it out, and try to anticipate what the Japanese Fleet will do next? For the most part, these decisions take place off-screen, and we just see various arms of the military respond to those orders. There’s U.S. Navy pilot Dick Best (Skrein, the original Hot Daario, doing an almost embarrassingly cheesy Jersey accent), whose risky way of flying and general “cowboy bullshit” is looked down upon by fellow pilots Wade McClusky (Evans) and Eugene Lindsey (Criss). Vice Admiral Bull Halsey (Quaid) is so committed to beating the “Japs” that he’s ignoring a shingles diagnosis. Jimmy Doolittle (Eckhart) is evading capture by the invading Japanese in China. And Layton (Wilson) is working to convince Admiral Chester W. Nimitz (Harrelson) that he should trust their intelligence, although the Americans are only intercepting and translating a percentage of Japanese communications. 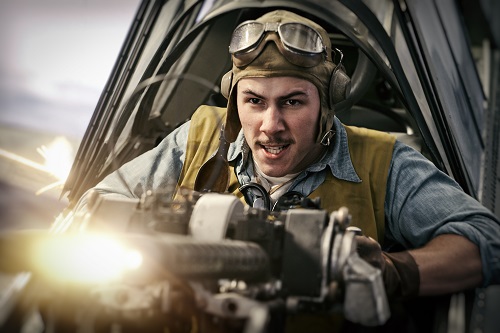 Do you really need any more plot synopsis? You do not. Midway introduces all these subplots and bounces between them in such a confusing way that it’s actually quite difficult to understand how these various groups work together. There are many date and location changes given as we jump around the Pacific and forward in time, basically only following the narrative battle by battle, and that would be fine if those action scenes were at least interesting. Very infrequently, they are: Dick Best (I CANNOT GET OVER THIS NAME) is a dive bomber who has to work with his radio operator James Murray (Keean Johnson, of Low Tide) to figure out exactly when to drop missiles and then pull out of his dive, and those scenes are universally thrilling. A scene when a Japanese fighter aims directly for an American aircraft carrier, intending a kamikaze flight, is met head-on by aircraft mechanic Bruno Gaido (Nick Jonas, hilariously out of place) jumping into a plane and firing right back is pretty metal. But those are exceptions in an otherwise numbing monotony of CGI battles, pew-pew shooting noises, and gruesome deaths for characters we barely know.

Midway has all the other components you would expect from a World War II movie, like a wife left behind (Mandy Moore, given little and doing little) and brief glimpses behind enemy lines; I was surprised, actually, by how much screen time was given to the Japanese engineers of the war, and to the fact that the film is dedicated to both American and Japanese soldiers. (Midway makes sure, though, that every American is provided moments of heroism, while the Japanese are mostly just there as screaming, mocking villains who jeer at the American pilots before they’re killed.) But that too feels like part of the political game Midway is playing, this idea that the world was better back then because of men like Dick Best, men who were straightforward in their whiteness and their straightness and their Americanness. We talk a lot about how romantic comedies as a genre can be a mindless reinforcement of the status quo, but that observation is just as applicable to a movie like Midway, a movie that asks very little of its audience aside from mindless military worship and purposeless nostalgia.


← In Politics, Purity Is Pointless If You Don't Win | On 'Watchmen,' As in Trump's America, Nothing Is True and Reality is a Carelessly Whispered Lie →