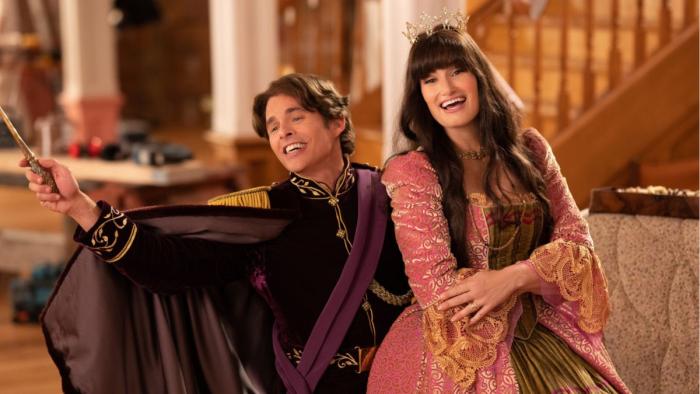 Review: 'Disenchanted' Isn't as Magical as its Predecessor

Enchanted predated the direct-to-streaming Disney+ release strategy. The 2007 theatrical release was a spin on the fairy tale princess stories that Disney classics traded in, and it blended “real life” and animation to subvert their tropes. In the story, animated fairy princess, Giselle (Amy Adams) felt a bit trapped in her two-dimensional life and after being expelled into modern New York, she found a new kind of happily ever after with someone who wasn’t her prescribed prince charming. With the story wrapped in a bow, it left us wondering what succeeded that magical “The End,” and Disenchanted has landed on the streamer to fill in those blanks. Disenchanted finds Gisselle and Robert with Morgan and the pair’s new daughter trying to adjust to their competing versions of an ideal life.

For Giselle, finding happily ever after was supposed to be the hard part but her life in New York City proved to be more difficult than she expected. Wanting for a life more like her 2D fairy tale one, she and the family move from the city to Monroeville, a suburban town with the charm Giselle misses. But the suburban lifestyle comes with problems too. Their house is a “fixer-upper,” Robert (Patrick Dempsey) faces a draining commute, and Morgan (Gabriella Baldacchino) feels lonely and isolated from her friends. Hoping to reharness the magic from her more simple times, Giselle borrows the wishing wand gifted to her daughter, Sophia, and wishes for a fairy tale life. Monroeville turns to Monrolasia and is draped in magic, turning the residents into versions of themselves that fit the fairy tale mold. But for Giselle, a newly minted stepmother, that means becoming a wicked villain. Trying to stop herself from tormenting Morgan and realizing her destiny is wicked, she enlists the help of her Andalasian friends to banish the spell before the stroke of midnight cements its permanency.

The story is simple enough and makes sense in the universe of Enchanted. Reflecting on what comes post-happily-ever-after in a world where married women are either dead or wicked second wives is compelling territory for a franchise that uses subversion with a sprinkle of feminism to tackle these tired tropes. But instead of a second shot at playing with these concepts, Disenchanted gets lost in its layers of subversion and seems confused about what it’s saying or doing. One of the things that worked about the first is that it asked what might happen if a woman with Disney princess sensibilities landed in unforgiving New York, but Monroeville reflects Andalasia in a way that presupposes what roles each character would be slotted into. While it adds a twist to the wicked stepmother bit, it gets lost in its own metaphors. The magic of gruff New Yorkers joining in with urban regulars to add flavor to a perky princess song was what gave the original some flare, and this is buried in the sequel’s vague suburbia that seems built to be slotted into a fairy tale twist.

The cast is what keeps this movie alive. Amy Adams has a lot of fun jumping into the dual roles of both a fluttering princess and a wicked villain by changing her pitch and adding hand gestures. Newcomer Maya Rudolph aces the role of suburban queen-bee villain and is a worthy addition to the bit. James Marsden as King Edward remains the MVP and is the only one who does enough to get a laugh. He might be King of Andalasia to some, but he’s the true King of the himbos to us all. While I wish Idina Menzel’s return as the city-woman-turned-princess would have come with more insight into how their worlds differ, her contribution to the music is the only thing that makes the songs worthwhile.

Where Enchanted has a few memorable songs you might find yourself whistling years later (with the aforementioned mashup flare), Disenchanted is scored by forgettable tracks that feel like they’re out of a copycat. Though Alan Menken and Stephen Schwartz returned to write the songs for the sequel, their tracks feel a lot less catchy and memorable. The standout is probably “Badder,” performed by Rudolph and Adams, as it has the villain twinge found in songs like “Be Prepared” and “Poor Unfortunate Souls,” though it could not compete with those titans.

Disenchanted is another movie that makes sense for a streamer in that it makes for easy-to-ignore background noise held up by watchable performances. It’s unfortunate that this sequel traded in a lot of the feminist subversion for more direct Disney references. Disenchanted is an enjoyable enough follow-up to its delightful predecessor, it just seems that Enchanted exhausted the magic.

Disenchanted is available to stream on Disney+ November 18, 2022

← Actual Working Models Took to Instagram to Read Nepo Babies For Filth | 'The Walking Dead' Is Over. Here's Who Dies and How It Ends →