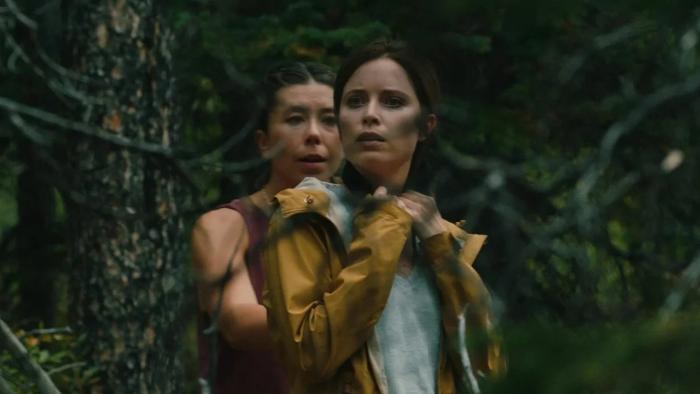 Fantasia Review: ‘Dark Nature’ Is Survival Horror at Its Best

Berkley Brady’s Dark Nature has the best intro credits of the films I screened at the Fantasia International Film Festival. The picturesque beauty of nature that surrounds the Rocky Mountains is laid out like still images … but ones that have been soaked in blood. The blood drips down the screen, tainting scenes linked to tranquillity. Even the most peaceful environment, however, can’t calm the mind of trauma. The Métis director’s first horror feature is gripping from beginning to end and is anchored by a skilled female cast who captures trauma and PTSD in all its damaging, even deadly effects.

Isolated in the middle of nowhere is never a good sign in a horror film, especially if there’s no cell service. TV recently has also shown us, with wellness thrillers Nine Perfect Strangers and The White Lotus, that going on a retreat probably isn’t the best sign either. Unlucky for Joy (Hannah Emily Anderson), she finds herself in both of these situations. Six months after getting out of an abusive relationship, she’s still struggling with the trauma and how it’s affecting her mental health. Her friend Carmen (Madison Walsh) thinks that going out of town and being with nature will help her heal. This wellness retreat she frequents with two other women, Tara (Helen Belay) and Shaina (Roseanne Supernault), is led by Dr. Dunnley (Kyra Harper), a specialist who helps trauma survivors face their demons head-on. Going through trust exercises and conducting sessions to unpack their past, all surrounded by the beauty of nature, sounds like the best environment to begin a new journey. However, Joy shows distrust towards the doctor, who has led them to the middle of nowhere; somewhere none of them have ever been.

She has reason to be uneasy; the foreboding signs are laid out from the very beginning. Throughout the film, the characters come across things like a car crash, contaminated water, and a decapitated deer head. It’s shrugged off as nothing of concern, but as Carmen explains that Joy needn’t worry about any harm, the forest’s stillness is broken by the sound of a lighter clicking. Derek (Daniel Arnold), Joy’s ex, used to play with his lighter, and Joy becomes paranoid that he is following them. Everyone is in disbelief of course, especially when Joy describes hearing whispers and monstrous growls. Soon, vivid flashbacks and nightmares begin to afflict everyone, their traumas messing with their heads and turning into something physical. They’re terrified, and even in such a vast expanse, there’s nowhere to run.

Brady excels at creating a suspenseful, claustrophobic atmosphere despite setting the film in immense space. The score by Ghostkeeper, combined with David Hiatt’s editing, masterfully heightens the anxiety of the characters. Brady also excels as a scriptwriter, as shown by how she takes time to flesh out each of her characters. You understand exactly why each of them is there and how their trauma has affected them. The actors all excel at making the audience connect with them and fear for them in their isolation. Anderson captures Joy at different stages in her life - during her relationship and six months later - and is able to portray internal strife with a precision that allows us to point out differences in her character in the before and after. A mention must be given to Arnold who, as Joy’s abusive ex, is an actor who manages to just walk onto the screen and automatically exude unpleasantness.

Trauma in Dark Nature, as in real life, chases you like a monster, but the film emphasizes women’s strength and willingness to jump right into the belly of the beast and take on their fears — no matter what happens. It’s survival horror at its best.