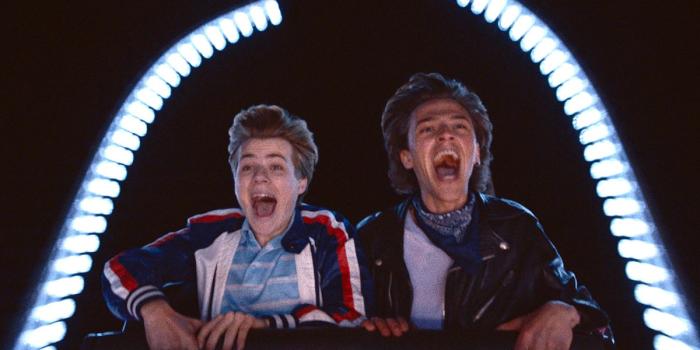 The director François Ozon has been a leading figure of the French New Wave thanks to films like Swimming Pool, 8 Women, and L’Amant Double. While he’s no stranger to genre experimentation, Ozon is perhaps best-known for his stories of human sensuality in all its forms. He is a filmmaker associated with cinema du corps, meaning ‘cinema of the body.’ So, if you’re new to Ozon, to put it bluntly, and just a tad reductively, expect some really hot sex.

Ozon’s newest film Summer of 85, previously set to compete at this year’s Cannes Film Festival before COVID-19 put an end to that, has already garnered a number of comparisons to Luca Guadagnino’s Call Me By Your Name. Here’s another European coming-of-age story centered on a gay romance between two young men, one of whom looks eerily like Timothee Chalamet, and that movie certainly owes a serious debt to Ozon in many ways. Summer of 85, however, is less concerned with tender affection than its peach-loving sibling.

Based on the ground-breaking YA novel by British writer Aiden Chambers, Summer of 85 follows a death-obsessed teenager named Alexis (Félix Lefebvre) on the beaches of Normandy. He’s new to the area and struggling to decide whether to stay in school and study literature or quit and get a job. During an unexpectedly stormy sailing expedition, he is saved from drowning by David (Benjamin Voisin), an irresistibly charismatic young man who makes his intentions clear from the get-go. It sounds like a story of a Summer in paradise, but as the opening of the movie already revealed to us, David will soon die, and Alexis is now in custody for an unnamed reason.

Much of this movie feels like familiar Ozon territory: A tale of sensual awakening mixed with an element of suspense, all with a slyly brazen edge. It’s slick, immensely appealing, and confident in a way that Hollywood seldom is when it comes to sex of any kind, much less that of a romance between two young men. Summer of 85 is also, however, a rather mellow affair by Ozon’s own standards. Alexis and David’s first time, however, is essentially a cut-to-black moment deliberately kept secret by our young narrator, which would seem like a cop-out under anyone else’s direction. This, of course, is not Ozon’s standard practice. He’s arguably the most interesting director of sex in modern cinema outside of Pedro Almodovar, so his gentleness here is a deliberate choice rather than a panic move.

As the story bounces between the origins of this summer fling and the slow reveal of what happened to David, Alexis is tasked with telling his story, partly to figure out his own mind but mostly to offer a legal defense for himself. His narration simple, blunt, often inarticulate, but as honest as he can imagine. We see the heady days of his first meeting with David, a full-on ’80s movie hottie who feels like the perfect mixture of young James Spader, current-day Chalamet, and Nic Cage in Valley Girl. He feels like he’s jumped off the screen from a John Hughes film and become the boy of Alexis’s dreams. As played by Benjamin Voisin, a real star in the making, he is the right mixture of petulant and charismatic, a real brat prince, a dreamy tortured bad boy who it’s all too easy for Alexis (and us by extension) to fall for. Of course, we know this romance is doomed, but questions of why and how are more difficult to answer.

Alexis’s questionably reliable narration sets up a mystery that feels almost noir-ish in the beginning, although its payoff may feel hopelessly anticlimactic for some. Ozon is no stranger to old-school sexy dramas (he may be the best director still working in the mostly-dead genre), but this back-and-forth timeline feels like it was built for something more tangled than this movie. As much as the movie evokes Rob Reiner’s Stand By Me, it’s not that kind of ‘do you guys wanna see a dead body’ movie. Rather, the most impactful death is Alexis’s naïve understanding of romance. The vibrancy of ’80s Normandy — all pastel tank-tops and neon discos in a deeply lived-in way, complete with Rod Stewart music — fades just a little bit once the romance goes sour. This is a movie of nostalgia in more ways than one, both for audiences soaking in the 1980s warmth and memories and for Alexis as he tries to untangle reality from his own emotional blinders.

Reading back the synopsis of Summer of 85, it’s easy to write this story off as yet another tragic gay romance, but that feels inaccurate. The film is a gay romance and a coming-of-age story but it eschews many of those trite conventions. This isn’t a coming-out story, there are no dramatic monologues or formulaic angry parents scenes, and even with the ’80s setting, the ugly truth of AIDS is never mentioned. The story doesn’t end well but it’s not tied to their sexuality. Really, if you switched this up into a hetero-tale then it would probably be ripe for a tear-jerking YA romance in the line of recent releases like Chemical Hearts.

The appealing lightness of Summer of 85 makes it an easy watch but there is a thinness to the narrative that makes the end result one of Ozon’s lesser efforts. If you’re looking for an entry point into his work, however, this would be a solid place to start. This isn’t a story that lingers in the way much of his other movies do, but Summer of 85 is unabashedly inviting in the way that a good Summer romance, tragic or otherwise, should be.