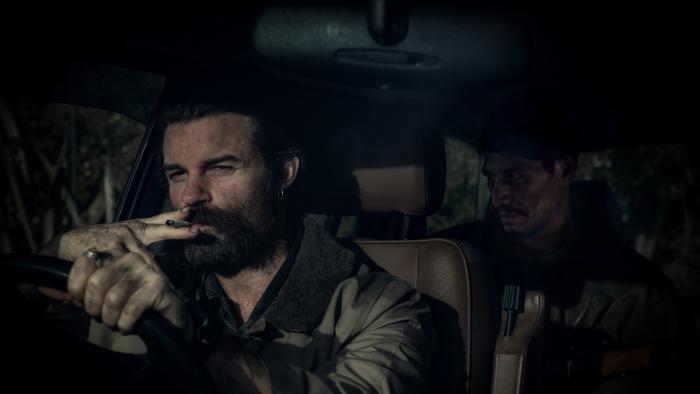 Review: 'Coming Home in the Dark' Is So Scary It Literally Knocked Me Off My Seat

Imagine if you took a snapshot, a happy family photo, moments before your world fell apart. In the picture, your smile is preserved, immortalizing a moment of blissful ignorance of what was to come. Such a snapshot is taken by the family at the heart of the nerve-rattling Coming Home in the Dark, which follows a road trip to hell.

Snug in a picturesque valley of New Zealand, a family of four enjoys a picnic. Well, they’re trying to. The teen brothers are bickering, already bored of the nature walk. But mother Jill (Miriama McDowell) urges them to smile with their dad Hoagie (Erik Thomson) for a family photo. Moments later, their peaceful holiday is invaded by a pair of scowling strangers, who they will come to know as Mandrake (Daniel Gillies) and Tubs (Matthias Luafutu). The former is a monologuing scoundrel, the latter a silent yet scary sidekick. They subdue the family, rob them, and then things turn irredeemably violent. A twisted tour will follow, the family’s vehicle repurposed for a night of nihilistic mayhem. Along the way, Jill and Hoagie will be tested, terrified, and tortured in hopes of pulling out horrid secrets of a past not quite buried.

Originally a short story from Owen Marshall, Coming Home In The Dark is bulked up with a historical backstory, courtesy of screenwriters Eli Kent and James Ashcroft, an actor who makes his feature directorial debut here. Impressively, Ashcroft keeps a throttling hold on the suspense throughout. From the moment Mandrake appears as a sinister silhouette in the distance, a tangle of tension might nest in your stomach. As he cocks a crooked smile, then a rifle, that knot will grow. And grow, and grow, pushing you to edge-of-your-seat anxiety as violence springs abrupt and needless.

It’s not just that Gillies stretches out in the role of the scoundrel, luxuriating in every blow and barb delivered. It’s that Ashcroft lulls us into a sense of safety that we’ve passed the point where things must go totally horrid, and just when we might relax—BOOM. The first time he pulls such a cruel move, I was so shocked I literally fell off my seat, stumbling back and staring mouth agape at the screen. From there, I understood this was a take-no-prisoners horror story, and yet the hits kept coming, throwing me again and again into stunned terror.

This film is so heart-racing it should count as a cardio workout. Yet such sickening thrills aren’t all Ashcroft and company have to offer. His sharp ensemble sinks their teeth into a grudging journey where confessions come hard and horrible. A sophisticated edit doesn’t focus on the source of shocking revelations, be they the lips of a broken man or the rifle swinging free of a trench coat. Instead, Coming Home In the Dark shows us the faces of those harrowed by it. Cutting gasps and trembling eyes hit harder than an insert shot of a weapon could ever. Yet, the most haunting reaction shot might be one where you can’t see their face at all. While a world of pain is unleashed behind them, one character stares dead ahead. The shot lingers on the back of his neck, unmoving but tense in the glow of a gas station’s neons. Sitting here, we’re left to wonder what this means, and fearful we’ll never really know.

Which is all to say, Coming Home In the Dark is a white knuckle ride of ruthless horror. Depending on your stomach for such things, your mileage may vary.

Coming Home in the Dark premiered as part of Sundance 2021’s Midnight section.