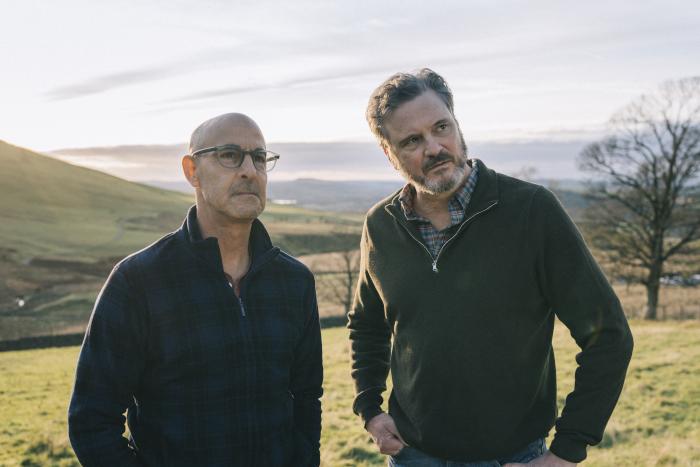 Now on VOD: Colin Firth & Stanley Tucci Light Up The Sky in 'Supernova'

I vividly remember the first time I recognized my boyfriend far down a crowded Brooklyn sidewalk; his specific gait highlighted itself, with laser-like Terminator efficiency, from the rest of the pack. Every other person, little children to old ladies, melted away, and there was just him, only him, walking towards me. It wasn’t exactly a romantic sensation in itself, merely a practical one. A culling of others into the only signifier to count. Maybe that is romantic? He was who I was waiting for, in the sense that we had things to do. And yet, he was the one I was waiting for, in the bigger sense as well.

So much of long-term love is about negotiating the practicalities of a lived-in, worn-down romance—that is, a romance that doesn’t see itself as that when it’s about washing dishes, folding laundry, making dinner precisely one million nights in a row. We do what we gotta do, but we do it together. For ourselves and another. We don’t become one exactly, but we become made of the same stuff. He might finish my sentences, but somebody had to start them, after all.

If there’s anything that writer/director Harry Macqueen’s lovely and quietly devastating Supernova gets right—and it gets a lot right—it’s especially there in its opening forty minutes or so where we first meet Sam (Colin Firth) and Tusker (Stanley Tucci). They are on a road-trip across the beautiful countryside and crummy road-stops of England, floating inside a comfortably battered R.V. world all unto themselves. Astride their aluminum-paneled comet, alone with each other and all of the stars above, Firth and Tucci feel like the oldest of friends in all the right ways. One stopping where the other starts, with the dust spaced in-between intermingled.

They’re so far past understanding the other’s habits that the intimacy of these early scenes feels profound just through half-spoken silences—they’re each on to the tenth thing down the list before we’ve even come ‘round the corner. Of “Sam and Tusker” there is Sam, and there is Tusker, and there is that “and” slapped in-between, the base of the seesaw where they swing up and down, inextricably linked. Firth and Tucci create two people and then a third made out of the two of them together, just as real as any sitting before us.

And so, as mistakes fritz in, we notice. We notice Sam noticing. The molecules of their third seem to shiver. Tusker, we figure, way before the film feels like spelling it out, isn’t well. The wavelengths are stuttering, and into this little slice of heaven, the outside comes flooding in. Like the last act of Darren Aronofsky’s mother! we find ourselves furiously resenting these intrusions of outdoors, of kind-meaning faces and aberrant miscommunications. A sacred thing is being violated here.

To this end, although both are stunning, it is Firth’s performance that in particular moved me the most deeply across the span of Supernova’s latter acts. We watch his Sam unmoor, whimper, become like a helpless child floating across space. Tusker’s mind is what’s going, the little things, remembrances like the way the other one walks down a crowded street, being forgotten, and it seems to be taking Sam with it. The unraveling enlarges, telescopes; the black hole of time is unrelenting.

And so it goes. The worst thing one can imagine happening is the only thing we know for sure will. Sam and Tusker can drive to the moon and back, but their destination’s foretold—how we come to meet the moment is precisely all that matters. The dishes and the laundry fall away and suddenly it’s what they stood for, the little assistances that we gave each other along the way, that remain. You can feel it, warm pressed into the side of you, after it’s gone. Flags planted on the stars even as they explode. We mark each other divinely and forever with our little feats of love. Just to be seen, separate, apart from a crowd.

Supernova opens in theaters on January 29, and will hit digital on February 16.