Review: 'CODA' Is This Year's 'That Sundance Movie'

Written and directed by Heder, CODA stars Locke & Key ingenue Emilia Jones as a Child Of Deaf Adults. 17-year-old Ruby Rossi is the only hearing member of her household, which makes her a crucial part of their crew. Her mother (Marlee Matlin) and father (Troy Kotsur) don’t read lips, and the small fishing community around them doesn’t know sign language. So, they’ve become pretty isolated. This is a recurring frustration to Ruby, who has served as translator since she was a toddler, and her older brother Leo (Daniel Durant), who can read lips but feels his parents underestimate him in interacting with the outside world. As new regulations are hitting the fishermen, the family is pushed to the brink. More than ever, they need Ruby to help out on the boat before she goes to school. However, she’s finding her voice, literally, and chasing her dreams to go off to college become a singer. So, every free moment she can chisel away is spent rehearsing with a bombastic mentor (Dora And the Lost City of Gold’s Eugenio Derbez) or frolicking with her musician beau (Sing Street’s Ferdia Walsh-Peelo). As her big audition for college approaches, the family’s business booms. Something has got to give.

The concept of CODA is of the familiar “parents just don’t understand” variety. On one level, Ruby’s parents are blue-collar workers who think artistic fields are impractical. On top of that, because they can’t hear her sing, they really can’t tell if she’s got the talent to make a go of it. This is explored when the Rossi family goes to Ruby’s school concert. As she sings, they casually chat (via sign language) about what to have for dinner. However, then comes the moment that would have killed in a full theater. Heder cuts the sound of Ruby’s singing and everything else, thrusting us into her parents’ perspective. They can’t hear her, but they can see how her voice is impacting those around them. A flurry of close-ups shows people jaw-dropped in awe, smiling, and even crying over Ruby’s performance. It’s the big moment of epiphany, so moving that I’m tearing up remembering it.

CODA is much more than its cliches. (Cliches that are standards for a reason! They work and reflect experiences a lot of us have had!) At its core, CODA succeeds because of a remarkable ensemble that brings Heder’s script to life, turning the Rossi family into flesh-and-blood people instead of stodgy stock characters. Jones shoulders the film, moving between the hearing and deaf realms with equal bravura. At school, she wears a sneer for the bullies who badger her about her family and smelling of fish. In lessons with her teacher, her icy veneer melts away as she experiments with her voice and shares her secret ambitions. With her boyfriend, she escapes the burdens of her family and their business, to laugh and pretend ever-so-briefly she’s just like carefree girls she assumes her peers to be. Then, at home, she is a force: defiant, strong, caring, yet snarky, a perfect match for a household full of big personalities. 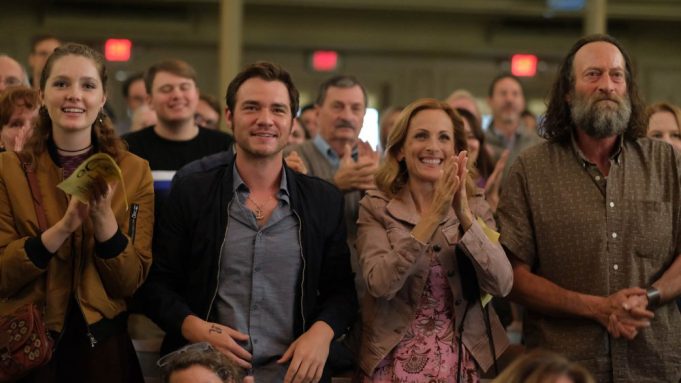 Subtitles aid hearing audiences in understanding the conversations among the Rossis, which include candid talk of sex, saucy metaphors, and some outrageous signs. One of the film’s most hilarious moments is a safe sex talk getting a little bit of spice thanks to some very vivid gestures.

As the brooding big brother, Durant cracks jokes, slings crass nicknames, and delivers declarations with mesmerizing passion. Then, a romantic subplot peels back his hard shell to reveal a softer side. Matlin brings her dazzling smile, sharp comic timing, and penetrating stare as a mom who has long treated her child as a grown-up but struggles to let go. Yet, the most poignant performance is presented by Troy Kotsur, who plays a dad so sincere yet silly, you may feel homesick.

Wearing a long, gray grizzled beard, Frank Rossi looks like he might be a growling tough guy. Yet he is a man of warmth and good humor, albeit on the vulgar side. Early on, when asked to explain a medical ailment to a doctor, Frank doesn’t just sign that he’s got a rash on his genitals. He describes this affliction with vivid detail, painting a horrific portrait of pain and marred junk. Then, Ruby has to translate that to a bewildered doctor. The aforementioned sex scene is another opportunity not only to show Frank’s—well—frankness and jocularity, but also for Kotsur to show the expressiveness and beauty of sign language. Even if you don’t speak it, even if you don’t read the subtitles, I’d wager you’d still have a sense of what he’s saying, because Kotsur’s emotional oomph is so profound. Then, comes a father-daughter finale moment that I won’t give away, but will say is so sublimely sweet that—yep!—I’m crying again.

Simply put, CODA is a poignant and playful crowdpleaser. And there’s nothing wrong with that.