Review: Chadwick Boseman Reminds Us All of His Excellence in His Final Role in the Stupendously Acted ‘Ma Rainey’s Black Bottom’

The magnificence of August Wilson’s work as a playwright was twofold: his microscopic attention to detail and the intricacy and complexity with which he crafted his Black characters, and his deep, unquenchable anger regarding how America’s legacy of slavery, oppression, and racism has shaped this country, and the lives of Black people living within it. Wilson’s plays have been heralded and awarded (the man has won more than one Pulitzer Prize for Drama!). Yet cinematic adaptations are few and far between, which is its own kind of commentary on what stories Hollywood thinks we want to see. You can thank Denzel Washington for finally giving us Fences, and you can thank Denzel, again—as many times as you want, really—for putting his producing might behind getting Ma Rainey’s Black Bottom made, too. Chadwick Boseman is electrifying in his final film role. There is a sort of poetic eeriness to the contrasting liveliness and anguish Boseman brings to his performance. May he rest in peace and power; his work lives on.

One of 10 plays in Wilson’s The Pittsburgh Cycle, Ma Rainey’s Black Bottom is adapted with a combination of intimacy and restraint by director George C. Wolfe, who has decades of theater direction experience, and also directed Oprah Winfrey’s The Immortal Life of Henrietta Lacks, and screenwriting partner and playwright Ruben Santiago-Hudson. The pair previously worked together on an HBO adaptation of Santiago-Hudson’s play Lackawanna Blues, and it is undeniable that Ma Rainey’s Black Bottom feels very much like theater. Tight quarters; big performances; blocking that teases out certain character dynamics; camerawork that floats around enclosed rooms and captures characters’ myriad reactions; long monologues; extreme close-ups held in immobile frames.

None of these are complaints! I am not saying theater is worse than cinema, or vice versa. Still, I think it’s worth noting that there are differences between the forms, and that Ma Rainey’s Black Bottom borrows from the approach of its source text in adapting this material. However, it’s when Wolfe really goes off-book and indulges in more cinematic flourishes, that certain themes from the play take on additional resonance.

The opening, during which you think two young Black men running through woods in rural Georgia are being chased by barking dogs, swerves at the very last second with the pair sprinting into line to see Ma Rainey (Viola Davis) perform for a cheering, encouraging crowd enamored with her sultry provocations. A well-edited in-studio sequence brings together disparate noises—the dinging sound of the red “now recording” lightbulb being switched on and off; the dull thunk of a ruined vinyl record being pitched into a trash bin—to capture the increasing agitation of Ma Rainey, her bandmates (Boseman, Colman Domingo, Michael Potts, and Glynn Turman), Rainey’s flustered manager Irvin (Jeremy Shamos), and recording studio owner Mel (Jonny Coyne). The final scene uses a slow zoom backward and a thorough pan across a packed studio to drive home Wilson’s overarching ideas about Black creativity and ingenuity being used to pad white people’s pockets. And as a reminder of the historical truths being explored in the film, Wolfe places the text of the end credits over black-and-white images of Rainey and her band, whose mastery of the genre was so well-known in the early 20th century that Rainey could bill herself as both an “assassinator” and “mother” of the blues. The way Davis plays her, both labels—contrasting as they may seem—make a perfect amount of sense.

Ma Rainey’s Black Bottom is set mostly during one day in Chicago in 1927, when Rainey and her bandmates are scheduled to appear at the studio Hot Rhythm Recordings to lay down some tracks for Irvin and Mel. On the one hand, Black people moving from the South to the North has opened up certain economic possibilities, but on the other hand, Ma Rainey can’t stand the North. She still experiences racism from judgmental cops and threatening white men, but her popularity doesn’t stretch as far. She’s particularly irritated by her band’s trumpeter, Levee (Boseman), who thinks chasing the jazzier, livelier sound playing in Detroit, Harlem, and Washington, D.C., is the way to move forward. 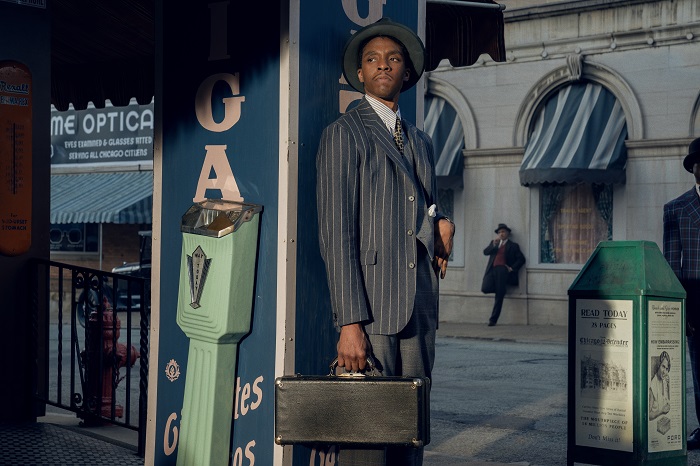 This is her band. Ma is the star and is backed up by longtime band members who know that abiding by what she wants is the way things are done. It seems everyone has their own beef with the hotheaded, impetuous Levee, who has been rearranging Ma’s songs and sliding them to Mel as a bid to get his own band off the ground. Guitarist and trombone player Cutler (Domingo, reminding you that you should rewatch If Beale Street Could Talk immediately) butts heads with Levee over his disrespect of Cutler’s Christian faith. Pianist Toledo (Turman) doesn’t understand why Levee would try and change the band’s sound to play better in nightclubs and bars. “What the hell having a good time mean? Gotta be more to life than having a good time,” he grumbles. Double-bass player Slow Drag (Potts) thinks Levee is stepping out of line by flirting with Dussie Mae (Taylour Paige), a 20-something woman who travels with Ma, and mocking the stutter of Ma’s nephew, Sylvester (Dusan Brown). “You think I care?” Levee laughs in response to their complaints and concerns. Ma Rainey’s Black Bottom operates at a simmer, and when Levee boils over, watch out.

The majority of the film is devoted to the band members’ varying discussions and admissions about religion, race, music, and work, with razzing interspersed throughout. An ensemble this strong makes those scenes a veritable feast. Every band member has a standout moment, and they all revolve around reactions to Boseman’s Levee: Turner’s eye roll when Toledo hears Levee’s come-ons to Dussie Mae, and how he turns back to his book instead of paying them more attention; Cutler’s exasperation with Levee’s constant boasting (“The day I get jealous of you, I may as well lay down and die” is a perfect line delivery); Slow Drag’s bemusement with Levee’s overprotectiveness of a new pair of crème leather wingtips that he bought with gambling winnings. Meanwhile, Boseman is a whirling dervish of resentment and bitterness, spontaneity and ambition.

His Levee distills many of Wilson’s observations about American Blackness, about the toll of generational trauma, and about the impossibility of fairness in American society in a performance that is deeply disquieting and horrendously sad. It’s a testament to Davis’s magnetism as a performer that she doesn’t give Boseman—or anyone else in this cast—an inch. As Ma Rainey, she is a commanding presence who knows her worth, who knows the work she’s put in, who knows the singularity of her own voice, and who knows that a white man will underpay her for it in a second flat. The smug triumph with which she slurps down an ice-cold Coke, forcing Irvin and Mel to wait on her until she is perfectly ready to record, is an exquisitely petty scene that should be immortalized in gif form and as widely circulated as Michael Jordan’s “And I took that personally” moment from The Last Dance. 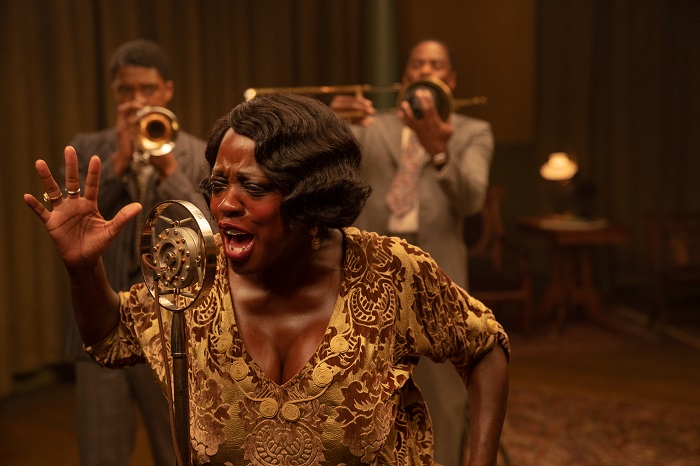 Much has been said in various reviews and on Twitter about Davis’s physicality while playing Ma Rainey, but what struck me more was the contrasting exhaustion and boldness she imbues in a woman who is fighting against the transformation of a genre she helped create, and that might be moving on without her. That sense of irreversibility is all throughout Ma Rainey’s Black Bottom, and the realization that we might be floating along in a universe that has already built walls up around us, that has already closed open doors in our face, and that has already thrown away the keys that could unlock better lives for us is a hard one to swallow. “Everything changing all the time. Even the air you’re breathing changes,” says Toledo. The sense that we’re beholden to the whims of unseen forces—that we’re not the protagonists of our own stories—cuts deep, as do the ensemble performances that give Ma Rainey’s Black Bottom so much resonance, poignancy, and power.

Ma Rainey’s Black Bottom is streaming on Netflix as of December 18, 2020.