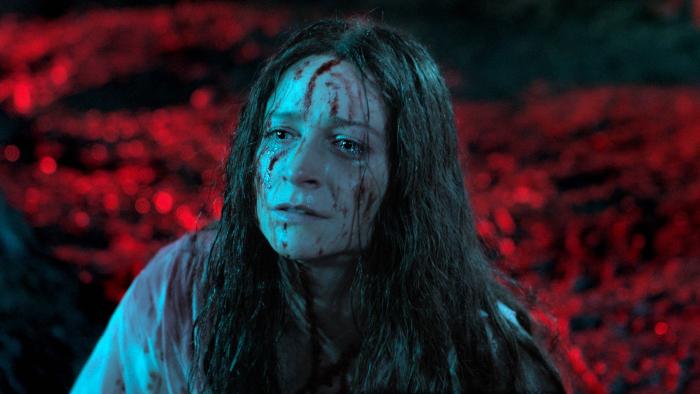 Sometimes a movie comes along with an idea so gorgeously obvious once it’s in front of you that you can’t believe you’re seeing it play out for you for the very first time. The idea was right there, dangling and ripe, for the picking, and you just want to pat the person on the back who simply reached up and plucked this perfect nourishment. So goes writer-director Prano Bailey-Bond’s Censor, the creepy and fabulous opening night Midnight Movie for the 2021 Sundance Film Festival, which plucks us a ripe doozy.

Enid (Niamh Algar)—and yes when we meet her she’s every bit as buttoned-up as the name “Enid” implies—works for the Film Censorship Board in Great Britain in the 1980s, under the dictatorial coiffure of Mags Thatcher (who’s seen doing her hectoring thing from the telly on occasion, to drive the conservative mindset of the period home). Enid’s work is rooting out the so-called “Video Nasties” of the era—those dirty videotapes that circulated in brown paper bags from under rental store counters showcasing all manner of depravedly pretend (or is it???) sex and violence. When Sam Raimi’s The Evil Dead and Abel Ferrerra’s The Driller Killer are your high-end examples you know deep seediness is afoot.

The early passages of Censor, which show Enid being very good at her work trimming excessive snippets of eye-gougings and sexual assaults, play a little like Peter Strickland’s already-classic-by-my-estimation Berberian Sound Studio (an exceedingly high compliment). The presence of a poisoned celluloid seems to be permeating the place. Film feels dangerous, a badness emanating in waves, altering the atmosphere itself. This is the sort of workplace where meetings between people involve the lights being turned off, and even when they’re on they’re, in an echo of Margaret White, we might have known they would be red.

And this is all before a film comes in that contains a scene that unlocks some dark memories from within Enid. Her past, involving a missing sister and a walk through the woods, plays out in front of her, filling in gaps she heretofore hasn’t been able to recall. Insidiously, the bloodshed she watches works its way into her half remembrances. Where what happened to her as a child ends and where this low-grade pseudo-snuff film begins is only growing muckier by the moment. Enid, like a mangled cassette, unspools. And Algar gives a whopping turn in the role, meeting Bailey-Bond all the way to hell and then some.

The tales of horror filmmakers tussling with the censors reining them in are the stuff of a full century of movie-geek legend. So it seems quite literally insane to me that Censor here marks the first time I’m seeing that relationship play out on-screen. Major props to Bailey-Bond for seeing the story sitting right in front of us all these years. But even beyond that Bailey-Bond doesn’t make a wrong turn, using that story to investigate the reciprocatory exchange between viewer and violence.

The world Bailey-Bond drops Enid into, with its ratio reframes and Bava-esque colorscapes, is a vivid nightmare place that at its best worms its way not just into Enid’s brain but also out into our own personal recollections. Censor’s video-store scene, with Enid procuring her dark cinematic drug of choice, shot me back like lightning to the grungy country store of my teenhood where my cousin and I, under the watchful eye of a Blood Beach poster, got our own too-young hands on Faces of Death and Cannibal Ferox, i.e. the horror dares of dumb boundary-pushing youth. Censor knows it might be that movie for somebody, and the devil bless its dark smart heart for diving in full throttle.

Censor opens in theater on June 11 and On Demand on June 18.

Censor was originally reviewed as part of Sundance 2021’s Midnight slate. For more on the festival and how you can enjoy it from home, check their website.