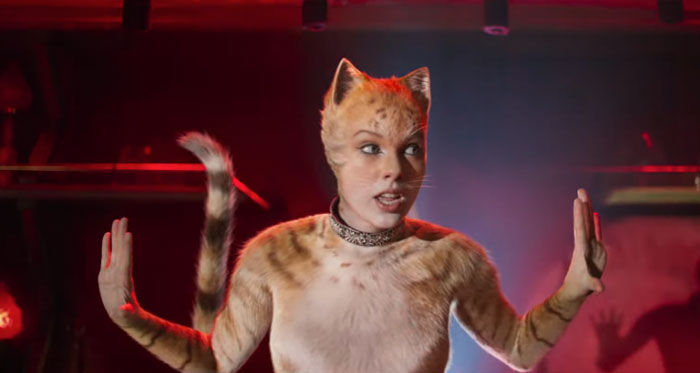 Review: 'Cats' May Be A Sign Of The Apocalypse, But It's Not All Bad

I went into Tom Hooper’s Cats with only a vague concept of the plot. Despite growing up as a theater nerd, Cats was never my bag. Through cultural osmosis, I knew bits about it, impressionistic cat costumes, long-running success on Broadway, the teary song “Memory.” But if you asked me what a “Jellicle cat” was, I wouldn’t know what to tell you. Well, now I have seen Cats. Now, I can report—I still have no idea what a Jellicle Cat is.

Based on Andrew Lloyd Webber’s famous West End musical, Cats kicks off with a pretty white kitty named Victoria (Francesca Hayward) being tossed in a sack and dumped in the cold streets of late-night London. There, she emerges wide-eyed and curious about the world around her, a perfect stand-in for the audience member new to this tale. Instead of gently introducing her to the world of Jellicle Cats and Jellicle Balls and the Jellicle Choice, the movie throws audiences into the deep-end with a rapid succession of songs that boast plenty of energy and star power but little consideration for viewers who aren’t already versed in the world of Cats or cats.

Full Disclosure: I am not a cats lover either. So songs that breathlessly list the qualities and quirks of felines didn’t dazzle as much as confound me. What is a gumbie cat? What distinguished it from a glamour cat? Why do some cats wear clothes and others do not? What is the deal with the menacing Macavity, and why can he vanish himself and others at will?

All this made watching Cats feel like watching a foreign-language movie without subtitles. I’d catch a word here or a phrase there I understood. Just when I got my bearings, something absolutely bizarre would happen, like cockroaches with human faces dancing about in a chorus line, or a Cat unzipping its fur to expose a purple dance outfit overtop another layer of fur, this one bedazzled. Just like that, I was lost again. Typically, a shared cinematic language can give a sense of setting and story even without dialogue or translations, but Hooper’s utterly bonkers choices make Cats feel like a movie—not from another nation—but from another planet.

A well-intentioned Pajiba colleague advised the proper way to watch Cats would be while enjoying an edible. I’m glad I only went in buzzed on cocktails, because as it is, I feared my mind might snap under the strain of making sense of the furry frenzy unfolding onscreen. From what I could decipher, Jellicle Cats get together once a year for a branded ball in which they compete for the chance at a new life by singing songs about their whole deal. Jennyanydots (Rebel Wilson) sings about being a bored housecat. Bustopher Jones (James Corden) sings about the glories of gluttony and trash, while Rum Tum Tugger (Jason Derulo) belts about his own infamous fickleness. There’s plenty more, including Taylor Swift’s bawdy cat, who jiggles furry breasts and then dumps party drugs on an unexpecting assembly. These musical numbers are loosely strung together, and none are helped by the creative decisions of director Tom Hooper.

I know. At this point, you’re probably thinking this movie is so bonkers you just have to see it. I will say this for Cats: I was never bored. Which is more than I can say for another big movie opening this weekend. To Hooper’s credit, he takes a big swing in adapting this stage show. Sure, it was wildly popular, but its barely-there plot and cat costumes seemed best suited to the stage, where audiences’ imagination and earnestness for song and dance offer plenty of safe space to play. However, it appears Hooper thought movie audiences wouldn’t extend this same suspension of disbelief. Instead of enhancing the musical’s story or world-building, he rebuffed the long history of cat-ish costumes in favor of “digital fur technology” and aggressive CGI re-shaping that transformed attractive stars like Idris Elba and Jennifer Hudson into walking nightmares of funky fur and floating faces.

Computer-generated fur creeps along the jawline and down the foreheads of famous faces. CGI whiskers glisten under human noses painted grey, black, white, and brown. The sides of the actors’ heads have been whittled away to erase their ears while trembling cat ears are perched atop their fuzzy scalps. Fur coats them from tip to tails, which sometimes twitch in unison to the music. Otherwise, their human anatomy remains unchanged. They have human hands, fingers, feet, and toes, long limbs, and even pronounced bosoms covered in thick fur. The shortness of the fur accentuates the human forms. This gives the unnerving sense that these cats are naked, which makes their crotches (CGI smoothed to flatness) like a car wreck: you don’t want to look but you can’t look away, especially when they are often placed center frame. I kept waiting for my eyes and mind to adjust to the freaky looks of these Cats, to just settle into Hooper’s vision, but these creatures never claw their way out of the uncanny valley, and so my brain was in a constant tizzy.

Helped often by cloaks and coats, some actors fair better than others as our brains need not work so hard to make sense of their shape. Sadly, even a cloak cannot save Hudson, whose Grizabella is painted to give her the appearance of a five o’clock shadow and the patchy fur that reads less of an alley cat and more of a failed art project. This means that during her big song—the song that EVERYONE knows from Cats—I couldn’t focus on her performance or the emotion, because my eye was drawn again and again to the clunky fur dancing around her face. Similarly, the tail meant to accentuate the line of dancer Hayward’s elegant moves actually distracts, because my eye couldn’t help flickering to this odd anomaly on the body of a ballerina. Instead of immersing us in the world of Cats, this boondoggle of digital fur becomes an obstacle to embracing the music and dance that was long a central reason to see the show!

Making matters worse, Hooper does not know how to shoot dancers. Again and again, he literally cuts them off at the waist in medium-shots that long to be wide shots. When he does give us wides, it’s for a furry pratfall or a sassy strut. Meanwhile, Hayward’s spins and extensions are often cruelly cropped. And when they are not, they’re crassly cut! Gene Kelly would roll over in his grave if he saw the editing of Cats, which acts like audiences will only be interested in dancing if we quick cut from one angle to the next. Such cutting means we can’t simply take in the skill and grace of the dances. The performances of the actors are cheapened by an editing style that is basically the human equivalent of wriggling a feather on a string. We see it! But we’re not able to savor its details.

With all of this, there are those who come out relatively unscathed. Hayward—even undercut and covered in ludicrous CGI—is a riveting leading lady, emoting excitement, anxiety, and tenderness through a strikingly expressive face, and limbs alive with musicality. Derulo is clearly having a blast as Rum Tum Tugger, and his joy is contagious. Robbie Fairchild brings plenty of theatrical mugging to Victoria’s self-appointed tour guide Munkustrap, and bless him for the camp. Dame Judi Dench gives a regally game performance as Old Deuteronomy, a sage of a cat who offers insipid words of wisdom with great gravitas. But the best of the litter is Sir Ian McKellen as Gus The Theater Cat.

He is introduced lapping up water from a shallow bowl. You might well drop jaw at the indignity of making one of our most respected living theatre actors present himself this way. However, it plays beautifully into Gus’s song, a jaunty ditty about the joys and indignities of theater life. It’s funny, reflective, and poignant. When he concluded, the skeptical audience of film critics I was watching with applauded, which was rare in general and throughout the film. This song worked because it swiftly created its own context. Even Cats noobs could understand the world Gus is singing about, and so it’s easy and a joy to follow his journey. If only more of this movie had made an effort to connect to those not already in the bag for Cats, it might have been fun on more than a WTF level.

← 'Get Out' Exposed The Horror Of The False Ally | Rep. Debbie Dingell Called Meghan McCain for Support, Bad Idea! →