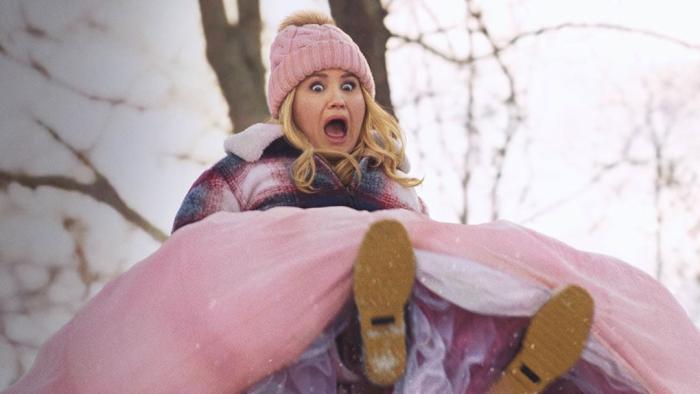 Review: Can Jillian Bell's 'Godmothered' Compare To The Whimsy and Magic of 'Enchanted'?

Mike Love of the Beach Boys once infamously told Brian Wilson ‘Don’t f**k with the formula.’ A formula worked pretty damn well for Disney right up until it didn’t, thus establishing a familiar cycle that’s kept their brand strong: a few years of traditional fairy-tales, followed by subversive takes on those same stories. The former is what has made Uncle Walt’s monopolistic behemoth so indomitable for decades, but it’s the latter that’s kept it fresh in the modern age of Hollywood blockbusters. Get the balance right between fantastical earnestness and riffing with a wink and you’ll strike gold, as hits like Enchanted and Frozen have proven.

Godmothered, the latest Disney+ exclusive movie, is very much cut from that same cloth. Enchanted is an especially notable inspiration for this tale of a young fairy-godmother-in-training who wants to prove that happily ever after still exists. Jillian Bell from Workaholics and Bill & Ted Face the Music plays Eleanor, a terminally peppy woman whose only dream is to be a fairy godmother. Unfortunately for her, the cynical modern world gave up on happy endings and true love fixing everything a long time ago. To prevent her school from closing and to prove to her skeptical classmates that their work is still in need, she travels to Boston (the one in America, she notes proudly) during the festive period to help Mackenzie Walsh (Isla Fisher) who, as a child, wrote a letter to ask for a fairy godmother’s help. Now, she’s a single mother, a struggling career woman, and someone for whom happily ever after is total nonsense.

The concept of a magical person trying to be their most optimistic self in a world of sullen reality is one that’s been mined for comedy for many years, and Godmothered follows in some really big shiny shoes. Disney itself loves to use this format to prove that it has a sense of humor about itself, so expect lots of jokes about animals doing the housework, spontaneous singing in public, and inappropriate dress wear for the weather. It’s hard to get too grumpy about such tropes given that Disney basically created them and is having its cake and eating it by mocking itself for fun and profit. Sure, you’ve seen this all before and Enchanted was certainly more vibrant in its approach, but that’s not to say that Godmothered is bereft of charm. Moments such as the fairy godmother school’s classroom of sullen elderly ladies acting like bratty teens and Eleanor’s excitement over the splendor of tailgating are thoroughly enjoyable.

Bell turns out to be an excellent fit for the Amy Adams-esque guileless fairytale woman of yore. A criminally underrated comedic talent, Bell’s skills are often shoved aside in favor of making her the ‘fat friend’ and relying on physical humor more cruel than witty. As Eleanor, she’s just the right side of sickly sweet and never undercuts that perennially Disney nature for a cheap gag or DreamWorks-style pop culture gag (but don’t worry, there are at least two genuinely terrible modern-day puns here that made me actively groan.) Her slapstick abilities are utilized in fun but often subtle ways, such as how Eleanor tries to prance gracefully while wearing her large-hooped dress but is constantly hindered by bad paving and icy roads. Mercifully, while there are a couple ‘oops, she fell down’ jokes, this is a movie without a single fat joke. Yes, it sucks that the bar is this low for movies like this and Bell deserves far better than what she is frequently offered in film roles, but hey, I’ll take what I can get. It doesn’t hurt that some of her mispronunciations of words rival Moira Rose for peak hilarity.

Fisher also excels in a rare straight-man role. One of the great manic comediennes of her time, Fisher made her name as a funny woman with brash mania in roles like Wedding Crashers. As Mackenzie, she’s the proto-typical beleaguered mother trying to hold it together with a snarky quip and vaguely frizzy hair. However, all the jokes about her being so old and frumpy fall flat because come on, it’s Isla f**king Fisher and she’s stunning. Still, she’s appropriately stern and pessimistic, even in the face of literal magic and her family’s instant awe over Eleanor’s messy wand waving. The subplot with her children feels a touch tacked on, which made me wonder if this film was initially intended to be for nostalgic adults rather than festive family viewing. Fisher is ably supported by Mary Elizabeth Ellis as her helpful sister and the very pretty Santiago Cabrera as her hot nerdy co-worker Hugh Prince (get it?!), a man who loves historical re-enactments, being an ethical journalist (there’s a weird fake news subplot at the local news channel they work for), and sharing his feelings. Friends, start lining up now.

Godmothered may not soar to the heights of Enchanted but there’s enough charm here to keep you entertained. It doesn’t hurt that the film comes with a message I think we can all appreciate: being happy for now is sometimes all we need, and a so-called happy-ever-after isn’t an endgame but an ongoing process with ups and downs and that’s OK. It’s been a tough year where long-term joy has felt increasingly in short supply. A movie allowing kids to understand that there are many routes (and bumps along the way) to finding your happiness in whatever form it takes feels like a minor win right now. Godmothered may take the exact route you expect it to in terms of plot and character, but those good intentions count for something and offer plenty of entertainment along the way. The formula has stuck around for a reason.

Godmothered premieres on Disney+ on December 4.