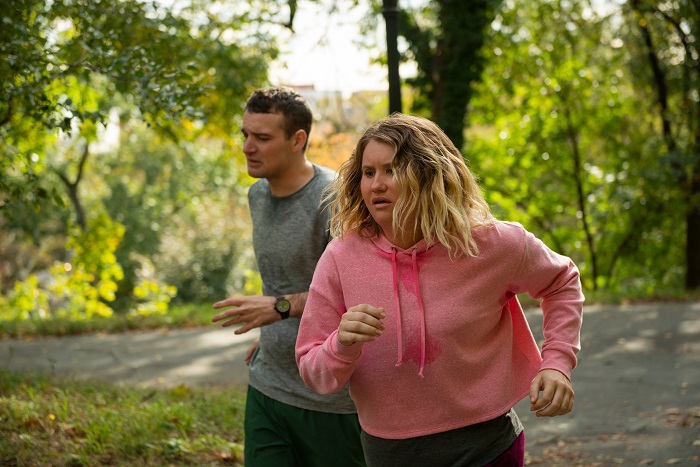 One of the most difficult things I did recently was tell someone in my life, whom I love but who is also critical of my weight, that “I’m happy with how I look right now.” It’s funny how often people will comment on your size as if it should be a surprise to you what you look like. It’s never a surprise to be told you’re not “average.” A lot of people are thinking about their bodies all the time, every second of every day, and if you don’t live like that, I’m honestly envious. It is a constant state of anxiety and tension that I am only recently beginning to break out of, and it was very reassuring to see that journey of myriad feelings reflected onscreen in the funny, uncomfortable, and cathartic Brittany Runs a Marathon.

Writer and director Paul Downs Colaizzo makes his debut with this film, which follows 28-year-old Brittany (a luminous Jillian Bell), who suffers a variety of quiet indignities every day because of how she looks. No one holds the subway doors for her. Barely anyone at her job, where she hands out playbills to theater attendees, will make eye contact. Only children laugh at her goofy faces and her silly jokes. Her roommate is a wannabe social media influencer who treats Brittany more like an assistant than a best friend, and who urges her worst instincts. They order food out all the time. They drink constantly. They do a variety of recreational drugs. And while her roommate stays petite, has a steady boyfriend, and complains that exercise makes her “too skinny too quickly,” Brittany is floundering.

Is it rock bottom when a doctor Brittany found on Yelp, who she assumes will give her an Adderall prescription just because she asks nicely for one, instead tells her that she’s obese, with an unhealthy BMI? It sort of feels like it! “I’m broke, I’m fat,” Brittany admits, and she knows what she needs to do. She needs to stop going out so much. She needs to apply herself more at her job. She needs to start exercising and focusing on her health. But—maybe tomorrow. Maybe the next day. How about next month? Or maybe a New Year’s resolution?

Colaizzo’s script perfectly captures the various phases of realizing you need to make a change, delaying that change, finally committing to it, and then experiencing the happiness that initially comes with success and the frustration that accompanies a plateau. The seeming impossibility of Brittany running that first block is communicated excellently—it seems so far, New York City sidewalks are filled with obstacles like baby strollers and clowns, Brittany doesn’t have the right outfit—and the film then grooves along with her success, but doesn’t make it easy. The same goes for her work and her friendships. The film’s pacing allows for us to become invested in Brittany’s journey while still being surprised by obstacles that threaten to derail her.

So often, the obstacles come from Brittany herself. Pushing too fast. Expecting too much. Throwing herself into a camaraderie with runners Seth (a charming Micah Stock) and Shannon (Michaela Watkins), but being miffed at their offers of real friendship, the kind you have to work to maintain. Flirting with coworker Jern (the great Utkarsh Ambudkar), but rebuffing the idea that how easily they get along could be the beginning of something else. Every flaw Brittany sees in another person, she refuses to acknowledge in herself, and the script is thoughtful in how it presents Brittany’s issues with her life being about more than just her weight.

I saw so much of myself in the choices Brittany makes, and the film delivers insightfully specific moments that are instantly recognizable to anyone who has been in her position. Putting on makeup before you exercise as a way to postpone actually doing it. Being surprised when someone who has never noticed you before finally now has the time of day, once you look different. The lure of “little goals,” and how simultaneously motivating and limiting they can be. The toxicity of certain friendships, and how ugly women can be to each other. The fear that you’ll always be the “fat girl,” even if you become healthier. It’s all there! Watching Brittany Runs a Marathon truly felt like going to therapy, and I mean that as a compliment.

Bell is really amazing here, doing something noticeably different from her breakout role in Workaholics. She was raunchy and zany alongside Adam Devine, Anders Holm, and Blake Anderson in that series, and although she has hard-partying moments in this film, the performance is more introspective. It’s more about the way Brittany avoids looking in the mirror, and the way she carries herself, and the British accent she uses to distance herself from emotional honesty, and the wear on her body as she prepares for the New York City Marathon. It’s a performance that demands both intense physicality and emotional vulnerability from Bell, and she does that all while still being hilariously funny. She’s goofy with Seth, dryly sarcastic with Jern, empathetic with Shannon, and truly open with brother-in-law and father figure Demetrius (a welcome Lil Rel Howery), and Bell nails it all.

Colaizzo’s direction plays it straight until the last 15 or so minutes, when the movie incorporates some slightly unfortunate CGI that is meant to look like a virtual map of the New York City Marathon route. It’s probably the only thing I can think to complain about regarding Brittany Runs a Marathon, which is otherwise so honest in its conversations about weight, wellness, and self-worth, so strong in its ensemble, and so pitch-perfect in its combination of comedy and drama.

Brittany Runs a Marathon is out in limited release around the U.S. It opened in New York City and Los Angeles on Aug. 23 and is slowly and steadily making its way around the country, just opening this past weekend in Baltimore. According to Amazon, the movie will be added to Amazon Prime streaming in “late 2019.”

← What's The Best Gwendoline Christie Red Carpet Fashion Moment? | Why Are So Many Movies Right Now Based On Magazine Articles? →