When legendary character actor Brian Dennehy passed away earlier this year on April 15, one of his final films, Driveways, hadn’t yet come out. Rapturous reviews out of film festivals in 2019 had trailed the collaboration between director Andrew Ahn and writers Hannah Bos and Paul Thurteen, and Driveways absolutely lives up to that hype. A phenomenally gentle, gorgeously poignant film about the two ends of life—growing up, and growing old—Driveways is the sort of healing experience we might all need right now. Remember how you felt when Sean Maguire tells Will Hunting that it’s “not your fault”? That’s the vibe of Driveways, the whole way through.

Set during summer break in rural New York, Driveways follows mother and son duo Kathy (Hong Chau, of Watchmen) and Cody (Lucas Jaye) as they travel to a sleepy neighborhood to clean out the house of Kathy’s recently deceased sister April. They don’t talk much: Cody is mostly glued to games on his tablet, and he barely eats. Kathy, a medical transcriber, is trying to soak up as much detail as she can to eventually pursue a career in nursing. They are aware that they’re out of place in this small town—with its one grocery store, its roller-skating rink, and its alternately nosy and indifferent neighbors—but there is theoretically an end date to this endeavor. They’ll get April’s house in order, they’ll put it on the market, and then they’ll go back home, their familial responsibility complete.

That changes, though, as it becomes clear that the gap between the two sisters was sizable both in years and in intimacy—because April was a hoarder, a serious one, and Kathy didn’t know. The porch is so packed with stuff that Kathy can’t get the front door open. After breaking in through a back door, Kathy pulls her T-shirt over her face; something inside this house has died. And as she moves gingerly inside, fearful of toppling over one of the many stacks of pillows, containers of rotting food, dinnerware sets, stuffed animals, books, laundry baskets, and so much more ephemera, we see Kathy’s eyes fill with tears. What regrets flood Kathy in that moment? What different choices could she have made in that relationship? Who was April, really, and why didn’t Kathy know? 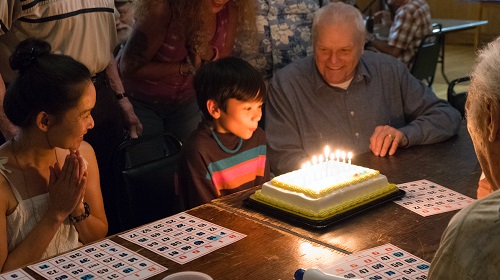 While Kathy realizes how much more daunting her task of cleaning out this house now is, the naturally observant Cody soaks in the neighborhood around him. The brother and sister duo from down the street, who ask Cody whether he reads manga comics and invite him to come over and read some of the ones their family inherited when they bought their house. The wrestling-obsessed brothers from another house, whose rough-housing intimidates Cody enough that he runs away before they spot him watching them. And, most importantly, the man next door: Korean War veteran Del (Dennehy), who watches Cody and Kathy from his bedroom window. The man is, noticeably and heart-breakingly, alone. He eats the same dinner every night out of a package of foil, at a kitchen table by himself, in a meticulously clean and wood-paneled interior. Portraits of his deceased wife line the walls and sit on his bedside table. Her dresses still hang in his closet. Del has one foot in that life—the one he shared with Vera—and one foot in his life now. He sits on the porch a lot. Every so often, he goes to the VFW to play bingo. Most of his life is silence until Cody and Kathy arrive, and a friendship between the younger boy and the older man sprouts and grows, like a tree clinging to the mossy side of a rock. You wouldn’t expect it, but you marvel at it—for its beauty and its resilience.

To Cody, Del’s gruffness isn’t that different from his mother’s brusqueness, but he benefits from having the older man’s undivided attention. They sit together on Del’s porch, reading newspapers and old magazines. They share a bowl of popcorn. While watching Wheel of Fortune, Del impresses Cody with his correct solutions for the word puzzles, and they laugh at Cody’s wrong guesses. In those moments, Ahn’s directorial style invites us in, spending time in these locations, letting the scenes linger, allowing us see the camaraderie and the ease between this highly unlikely pair. A young Asian-American boy, already used to the casual racism lobbed at him and his mother by meddling white people, prone to throwing up when he’s nervous, desperately looking for a friend. An older Irish-American man, one who served in the U.S. Army and whose youth was spent hitch-hiking, seeing the country, and blowing in the wind, a senior who sees his peers descending slowly into forgetfulness and illness. Cody and Del each need some kindness, and each of them is willing to give it, too.

Driveways unfurls forward once these relationships are placed, tracking how Kathy and Cody lean on each other (“Don’t lecture me, Professor,” she says, firmly but affectionately, to her son once he realizes she’s smoking cigarettes again) and how they protect each other. Chau is very good at contained fury (which you might recall from her work as the genius Lady Trieu), and she burns white-hot when she mistakenly believes Del committed a hate crime against her son, and when she correctly realizes that April’s neighbor Linda (Christine Ebersole) is low-key racist. (Linda’s shocked reaction when Kathy says her family is originally from Michigan tells you everything you need to know.) Jaye is a lovely find, emotive and intuitive, and his chemistry with Dennehy is winning. The film’s final 10 or so minutes are a showcase for the late actor as he delivers a monologue about Del’s youth, marriage, and the passage of time. “I don’t know what the fuck happened—40, 50 years just disappeared in there somehow. All of a sudden, there’s no time left,” Dennehy says, and the weight with which Dennehy delivers that line is staggering. There is of course a posthumous affection for Dennehy now built in for us as viewers, but his performance is gorgeously nuanced regardless, and the film’s concluding scenes—how they communicate to us a respect for the final chapters of Del’s life, and an optimism for the first chapters of Cody’s—work as well as they do because of Dennehy.

Thoughtfully incorporated throughout the script is an acknowledgment of the continued impact of the 2008 financial crisis on working-class Americans (April’s $900 electrical bill that was sent to collections “might as well be $9 million,” Kathy complains), and the movie is also gracious in its treatment of April, whom we never see onscreen but who becomes more than a cliché. Ultimately, though, what resonates so much about Driveways is the movie’s understanding of how we come and go through life, of how a house becomes a home, of how even the smallest acts of kindness can open doors that never quite close. “We’d be a little more deliberate this time,” Del says of what he would change about his life if he got the opportunity to do it over again, and may that be a lesson for us all.

Driveways was made available for rental and purchase through iTunes, Prime Video, GooglePlay, Microsoft, and cable VOD on May 7, and is also streaming via local theaters through virtual cinemas around the country. You can find tickets for virtual screenings here.