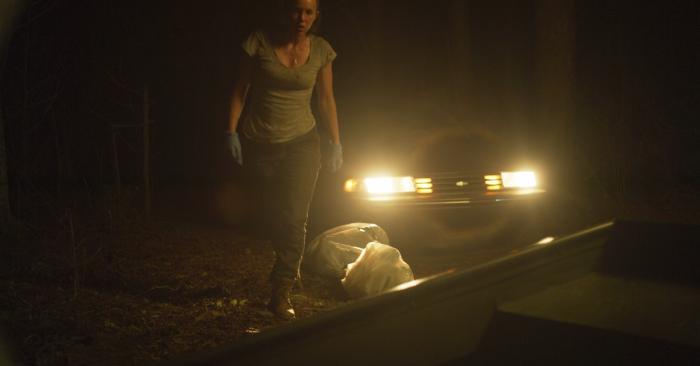 It begins with blood. Blood creeping on cold concrete. A woman looks rattled, she’s spattered and a bit battered, but the blood is not hers. She looks down at a dead man, the blood creeps from his cracked skull. The harrowed gasps that escape her split lip is her only companion in a mechanic’s garage with a fresh corpse and a grisly mystery. Blood on Her Name begins after the murder that is its inciting incident and invites you to follow its apparent killer in a clumsy and conflicted cover-up.

Written by Don M. Thompson and Matthew Pope, Blood on Her Name is a baroque Western, stripped of cowboy hats, horses, and heroes. What’s left is outlaws, blood, and gut-twisting regrets. Single mother and mechanic, Leigh Tiller (Bethany Anne Lind) scrapes by in a world defined by men. The shadow of her imprisoned ex hangs over the garage they once ran together. The troubling delinquency of her son offers a daily challenge as she struggles to veer him away from the path of his father. Meanwhile, her own father is a gruff sheriff who butts into her business and her parenting at every turn. Then there’s the mysterious dead man on her floor, who threatens to tear her meager world to shreds.

Leigh has to get rid of the body. But before she can dump it in a lake where it might never be found, the dead man’s phone rings with a message from his son. Aching for the family destroyed, Leigh decides to bring the dead man back to his people, leaving him in a place where they’ll be sure to find him. But her sympathy paves a path to her undoing, dropping clues that lead his kin to her door with suspicion in their eyes and vengeance in their hearts. As they close in, Leigh is forced to look back on the skeletons in her closet and consider how far she’ll go to protect her family from ruin. There will be no riding off into the sunset. There will be more blood shed.

Helmed by Pope, Blood on Her Name is a lean and mean thriller that’s shouldered firmly by Lind. Like Logan, it’s a character-driven drama that entices us with the scent of blood in the air, then hooks our hearts with a story of violence, trauma, and a deep yearning for redemption. This desperate woman is no white hat or black hat. She’s a complicated figure who’s purposefully hard to figure out. She is as much as mystery as what happened the night of that first killing. Leigh doesn’t stride, swagger, cock her hips, or spin a pistol. She trembles. She cries in the shower. She stumbles into flashbacks of a formative and heinous childhood memory. And in every troubled step, Lind is mesmerizing.

Her voice is soft, with a gentle Southern twang. When she speaks harshly, there’s a wavering that exposes her soft side, and potential weakness. Her eyes flicker with intensity, fear, and sometimes rage. The incongruity of her tenderness with the violence and the awful acts that come after is endlessly jarring, drawing us in to investigate and ponder the depths of darkness that might lurk in even the seemingly gentlest soul. For much of the movie, Leigh is a crumbling dam, trying frantically to hold back the flood of emotions that threaten to destroy her. Lind’s body practically vibrates with this tension, which is ruthlessly contagious.

Together, she and Pope create a dark whirlpool of a story that sucks you in, plunging you into darker and darker depths, suffocating you in the suspense of it all. It’s a sensational ride, not only for the sick thrills but also because at its core beats an aching humanity. For like Leigh, those around her won’t be painted simply as good or bad. This is a backwoods Wild West of poverty, corruption, and violence, where the only choices given are bad. As you’re sucked into this story, who to root for becomes complicated and all the more compelling.

Blending elements of crime-thriller and revisionist Western, Blood on Her Name delivers a uniquely exciting experience, where the spectacle is grim but the storytelling is defiantly—maybe foolishly—hopeful. There’s a deep wish that even the worst sins can be washed away, like blood from concrete. But some sins are too dark, staining everything they touch.

Blood on Her Name is now in select US theaters and on VOD in the US, Canada, UK, and AUS, and NZ. 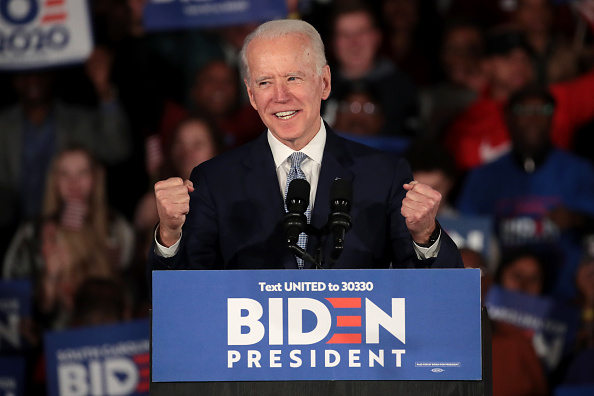