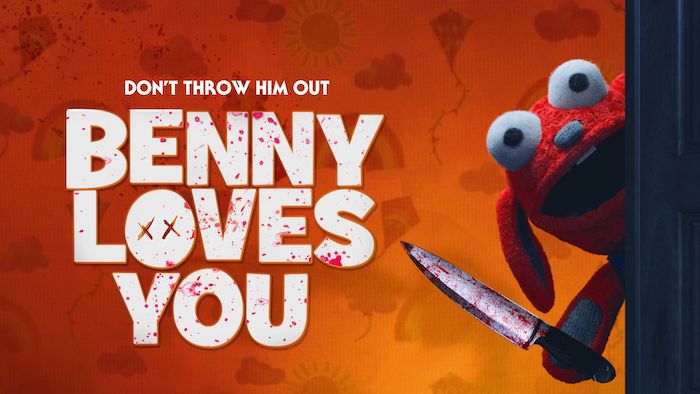 Review: 'Benny Loves You' Feels Like A Scruffy Cousin Of The 'Cornetto Trilogy'

With a sharp wit and a savage grasp of the zombie subgenre, Shaun of the Dead reignited audiences’ craving for parody in 2004. Since then, Edgar Wright has spoofed action movies with Hot Fuzz and alien invasion with The World’s End. In his wake, many have tried to recreate his signature blend of spirited, subversive, and smart with a slew of winking genre comedies. The latest is Benny Loves You, an evil toy offering that plays like the Cornetto Trilogy’s scruffy cousin.

Writer Karl Holt makes his directorial debut with Benny Loves You, which owes a lot to Wright’s influence as well as a panoply of horror properties half-heartedly referenced within. The plot is a spoofy spin on Child’s Play, kicking off with a cold open about a child terrorized by the teddy bear she abandoned. A complicated serial killer/soul-stealing subplot is chucked in favor of a simpler motive: toys are territorial and resent when you show your love to anyone—or anydoll—else.

Cut to 35-year-old manchild Jack (Holt again), a toy designer who lives with his parents and hasn’t managed to put childish things away. Nothing is going right for him. He has no friends. He’s a joke at the office. Then, his loving parents die in a freak accident on his birthday, and he’s facing foreclosure on their house. All he has is Benny, the stuffed bunny that has protected him since he was an ankle-biter who feared monsters under the bed—or demons in the hallway. Unfortunately, Benny is a fluffy slasher, killing anyone who catches Jack’s attention.

Falling into the manic misanthropic logic of Tale From The Crypt, Jack doesn’t immediately reject his homicidal doll because he starts by killing those who cross his adored owner. So, Jack buries the bodies in the backyard and pitches a toy line inspired by Benny: Scare Bears! Things are turning around for Jack at work. He’s even got a Cool Girl engineer (Claire Cartwright) swooning over him. (Not so much because of any presented value or apparent charm but because this is a manchild movie, so the hot love interest who’s not like the OTHER GIRLS is an annoying inevitability.) Of course, Benny doesn’t take kindly to a new love in Jack’s life. There will be blood, more killer cuddlies, and even a climactic Battle Toyale!

Benny Loves You offers a gleeful amount of gore within an unapologetically goofy storyline. The slays are of the sloppy b-movie variety, featuring blood spray, spilling intestines, and severed heads that look comically fake. That’s fine. This horror-comedy isn’t about the scares; it’s about the collision of sweet and savage. With his fluffy red fur, broad smile, off-brand Muppet look, and shiny butcher’s knife, Benny is a perfect mascot for this conceit. In a brilliant touch, he doesn’t move like an animal or a puppet. Instead, his walk is essentially floating with a wobbly wiggle of his legs, as if an invisible child is clumsily moving him across the floor. It’s like when you hear the clicking of blocks in the LEGO Movies. This deft detail swiftly sells the idea that this is a toy alive in our world.

Even with the suspension of disbelief that allows for sentient toys on vengeful spree killings, there are parts of the plot riddled in holes. For instance, we’re to believe Benny can slay a room full of people with ease. In the Child’s Play movies, Chucky was an established serial killer who had murderous skills but still used ambush to his advantage. No one suspects the doll lurking in the shadows! Here, Benny is just a bit of fluff with a knife in broad daylight. Why is this fleet of office workers incapable of ripping him to ribbons? Likewise, the film’s conclusion seems a cheat that banks on audiences being so in awe that they overlook the lack of logic. But this isn’t Jaws-level enrapture, where we’ll buy an exploding shark because we want it that much! Holt overplays his hand.

While Benny Loves You might pull its zippy tone and enthusiasm for horror spoofing from Shaun of the Dead, this movie doesn’t share in predecessor’s thoughtful plotting or sly allusions. Instead, references to Garbage Pail Kids, Texas Chainsaw Massacre, Psycho, Ghoulies II, Gremlins, and Carrie are made in slapdash visual gags or uninspired dialogue. It’s that stand-up comedian ploy of asking the audience, “Do you remember (insert popular movie/TV/band here)?” as a means of eliciting easy excitement. You do! That doesn’t make this clever.

There’s a fun idea in here, and Holt offers some welcomingly wacky sequences of comedic carnage. However, Benny Loves You ultimately feels like an overgrown Tales From The Crypt episode. The plot is too thin and the characters too starkly stereotypical to support the runtime of 94 minutes. There’s no sophistication beneath the silliness. No self-awareness behind the tedious tropes (like the aforementioned Cool Girl, who proves her worth through hotness, snark, and poop jokes.)

Simply put, Benny Loves You is not good. It’s simple, stupid, full of grisly gore, and ludicrous gags. Which is to say, it’s a pretty good Midnight Movie watch, the kind of thing best appreciated when you’re burned out, buzzed, or flat-out high. It’s the kind of movie that invites you in by playfully massacring a snotty little girl, then humbly entreats you to switch off your brain and let the macabre comedy wash over you. At that, it satisfies.

Benny Loves You opens in select theaters on May 7, On-Demand on May 11, and on Blu-ray on June 8.