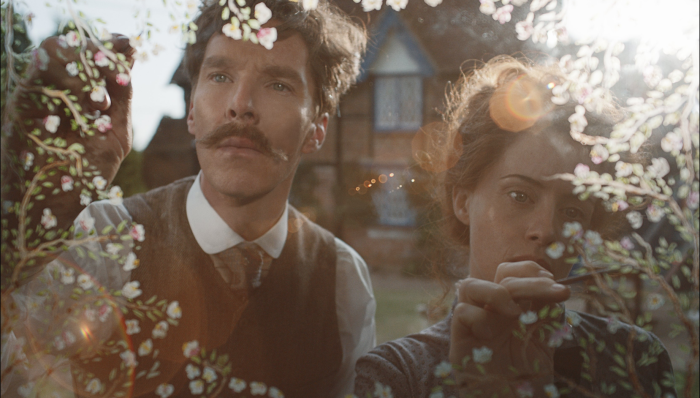 Review: Benedict Cumberbatch is Back as Another Quirky Historical Figure in 'The Electrical Life of Louis Wain'

The legacy of English artist Louis Wain is one of having changed the societal perception of cats. An illustrator, painter, and failed inventor, Louis spent his life tripping over the career world due to a lack of business acumen. At least that’s how this biopic portrays him. The remembered art of Louis Wain isn’t his newspaper illustrations or portraits of livestock, but his notability and ongoing notoriety sprung from his paintings of cats: portraying them as beautiful creatures that he adorned with large eyes. A cheeky life of a quirky painter was but a visage, as there was more inside the depths of the man, described in his biopic’s narration as a “dark, screaming hurricane of crippling anxieties and recurring nightmares.” The Electrical Life of Louis Wain attempts to portray the life of the beloved man with a paintbrush, capturing the beauty of his work and idealist nature and juxtaposing those against his personal struggles.

Louis Wain (Cumberbatch) doesn’t opt for the quiet life. After a brief look to his future, the film starts at the beginning of his career as a young newspaper illustrator. Prone to hijinks, Wain is found riding a train home from a job while bruised and covered in mud after a run-in with a bull. Louis’s life involves caring for (mostly via finances) his mother and sister, and in doing so, he trips over himself trying to find security and happiness in his life as an artist. Frustrating his eldest sister, Caroline (a devilishly berserk Andrea Riseborough), Louis interrupts her attempts to wrangle their younger sisters by making stark job decisions and wooing their governess. Challenging the social order, and shattering his family, Louis marries Emily (Claire Foy) and begins a life with her; he paints dog portraits in the country and sends money back to his mother and sisters. After adopting a stray cat, Louis slowly rises to notoriety for his beautiful art pieces of the oft forgotten feline, painting them with vivacious grace. But when Emily falls ill and Louis’s work begins to suffer, he is forced to shed his “devil may care” attitude and face the realities of a difficult life. His family crumbling, and his own health deteriorating, Louis struggles to stay afloat, experiencing anxiety and dread while being remembered as a man who brought so many others such great happiness.

The start of The Electrical Life of Louis Wain splashes whimsy across all four corners of the screen. Narrated by Olivia Coleman, it has the distinct scent of Armando Iannucci’s take on David Copperfield by layering modern meta commentary atop a period piece. Simon Stephenson and Will Sharpe’s script crackles with wit, mirroring the quirky flavor of the character, Louis Wain, and the art created by the real man himself. The dialogue has a musicality to it, and the dynamic performances of Foy, Riseborough, and Cumberbatch create a staccato sense of rhythm throughout the affair. Paired with the score by Arthur Sharpe, the film boasts a charming tempo with delightful affect.

But for all the eccentricity of the first half, the second is a slog. While the narration and score are beautifully juxtaposed to the tragic elements of the back half of the story, it quickly loses its ability to keep your focus. Like countless biopics before it, the sad story of an aging figure who just didn’t quite fit in with regular society becomes one of illness, sadness, death, and loss that incidentally begs you to wish for an ending. But for all its tired portrayals of the sad aging figure and his deteriorating friends and family, the movie remains sympathetic to its characters, even while bombastically portraying their strife.

Though a familiar biopic, the themes embedded in The Electrical Life of Louis Wain tell a richer story. Wain swims against the current: marrying out of class, painting goofy pictures, and rejecting job stability in favor of dream chasing. Eventually, the world forced him into a box and the story sheds light on the experience of a man with responsibility thrust upon him being forced to adapt. The Electrical Life of Louis Wain is about forced growth and struggle, the world threatening the choices of the individual, and how self-focused ideas can cause strain on those in your orbit. But even more, it’s about the power of love and care in other humans, and how magical the effect of a single person can be on countless others.

The Electrical Life of Louis Wayne is streaming on Prime Video as of November 5, 2021.

← The Best Thing Labour Leader Keir Starmer Has Ever Done | Review: 'Finch' Is Yet Another Movie That Lets Down America's Dad →