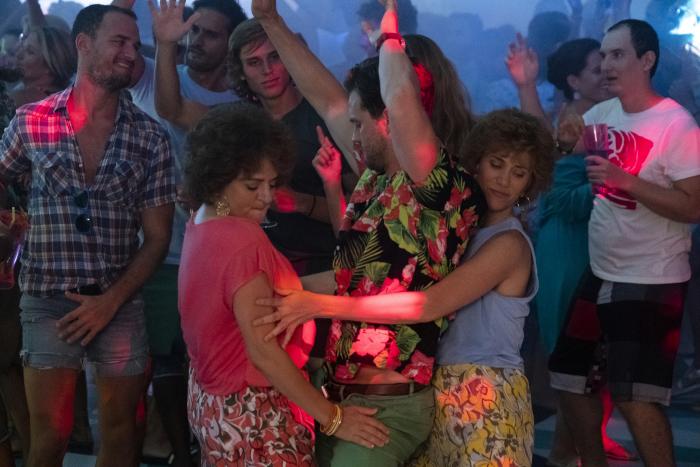 Seagulls in the sand can you hear my prayer: Send me a warm-hearted goofball good-time about two middle-aged Stellas trying to get their grooves back in the trippiest Sandals Resorts commercial ever created! Well somebody (somebody probably named Trish) was up there listening, and this weekend, swimming on the generous backs of two big turtles here to make all our day-spa dreams come true, is Barb and Star Go to Vista Del Mar. Directed by Josh Greenbaum and co-written by and co-starring the team behind Bridesmaids Kristen Wiig and Annie Mumulo, this thing’s a sweetly surreal sparkling diamond in the surf, Tommy Bahama approved and tested. Get to this movie fast, then take it slow…

When we first meet Barb (Mumulo) and Star (Wiig) they’re coffee-klatching it up on their favorite Chesterfield sectional on the floor center of the Jennifer Convertibles where they work, swatting off looky-loo customers with clueless, friendly abandon. Life seems fine, for a few minutes anyway, until their jobs go poof like the Dodo and their treasured spot in the local lady “Talking Club” goes with it (shout-out to the ever-noble smile of Vanessa Bayer for goosing these scenes with her wicked presence).

Before Barb & Star know it, they’re jobless and terrifyingly free like birds… strange birds made of seashells sitting on the counter of a beach-side kiosk, but birds all the same. And when they bump into a friend (a brief cameo by Bridesmaids’ own Wendi McLendon-Covey) who tells them of the “soul douche” called Vista Del Mar, somewhere down Florida way, they decide to make like bees (or perhaps a deadly swarm of poisonous mosquitoes) straight into the bright smiling arms and big white teeth of its sandy pastel paradise.

But speaking of deadly swarms of poisonous mosquitoes. Which we just were. Because naturally. From her Bond-villain lair beneath a cornfield oak-tree a sun-allergic spectre in a floppy white hat called Sharon Gordon Fisherman (also played by Wiig, but you’d be forgiven if you thought it was Cate Blanchett for a second) has a nit to pick with the town of Vista Del Mar. A diabolical nit that’s got her scheming with her trusty sidekick Yo-yo (Reyn Doi) and a love-struck moon-eyed mark named Edgar (Jamie Dornan) to bring that sparkling stretch of white sands to its knees. The annual Seafood Jam won’t be naming any Seafood Jam Princesses this year, oh no! On SGF’s command, Edgar heads down south to do her dirty business, wielding a deadly mosquito trigger beneath his belt buckle (not a euphemism), putting Barb and Star’s vacation on hard notice!

If you made it through the former paragraph as delighted to read that assemblage of words as I was to write them then Barb and Star Go to Vista Del Mar is just the movie for you. It’s utterly ridiculous in ever-mounting ways, growing more psychotic as its in-jokes pile on one other, building itself up into a sandcastle of logic that might spill the second the surf comes in, but my god is it a joy to watch its making. The night Barb and Star first meet Edgar (and you really need to pronounce that R hard, so it rhymes with the gals) in the hotel bar they get slipped a happy mickey, and I’m not convinced everything thereafter isn’t some sort of Parrothead Psychedelia—somebody tripped and Hakuna-Matata’d their head onto a conch shell. Shit gets real weird!

Which is just the way we like it. For his part, Dornan proves a hilarious foil, a sad straight-man turned bent by his Day-Glo surroundings. Edgar’s just been waiting for his chance to sing and strip and inspect clams on the sand, and whodathunkit these two dames set him free in ways unexpected and uproarious. He’s a goofball with stellar calves and an impish nature yearning for dong-hearted adventure—unlike the unbidden chuckles of Wild Mountain Thyme this one’s in on the joke. And the joke after that. And the five hundred after that.

Meanwhile, Mumulo and Wiig of course have enough chemistry to fill ten pairs of culottes, or maybe an entire poolside bar’s worth of oversized fruity-drink tumblers. They be riffing off each other’s tit-flapping wackiness like ol’ comic-pro teams of yore. If you told me they were going to make an entire series of Barb and Star movies a la Bing Crosby and Bob Hope’s Road series, I would pack my bag (make sure to leave room fer yer curlers!) and park my butt wherever they want to take me. Please, Barb and Star, take me away…

Barb and Star Go To Visita Del Mar is now on PVOD.

← Review: Visually Stunning 'Judas and the Black Messiah' Will Educate or Exasperate You | 5 Shows After Dark: '30 Coins' First Season Finale HBO, 'All-American' on The CW →