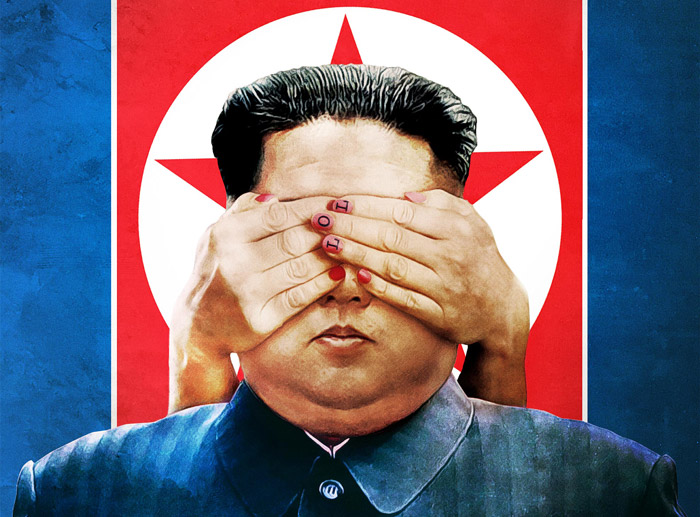 Sometimes world history seems too preposterous to be real. We in the US are watching that play out right now, where every damned day of Trump’s lame-duck phase is playing out as a stranger-than-fiction Idiocracy prequel. So perhaps there’s no better time to look to Assassins, a documentary that dedicatedly details the absolutely absurd political assassination of Kim Jong-un’s elder half-brother, Kim Jong-nam.

You might remember some of the case’s more outlandish tidbits, like a duo of pretty female killers, one wearing a t-shirt emblazoned with “LOL.” Ryan White’s doc not only steps us through the complicated murder case, but also shows how Disneyland, Jackass, and social media played key roles.

It was February 13, 2017, when Kim Jong-nam strode into the Kuala Lumpur International Airport, looking to check his flight time on an overhead monitor. That’s when he was pounced upon by two slim and smiling young women, who threw their hands over his face, then ran away. Security guards were soon present. CCTV footage shows the eldest son of the late Kim Jong-il, gesturing to his face and trying to wipe away a substance from it. Within the hour, he’d be dead. The substance was a deeply deadly toxin, which the assailants had on their palms and wiped into his eyes.

These women were swiftly captured, and the case seemed an easy win. After all, they’d attacked in broad daylight, in a space with a fleet of security cameras and witnesses. Neither denied being at the airport that day, nor laying hands on Jong-nam. Yet, both Siti Aisyah and Đoàn Thị Hương insist they didn’t intend to kill him. Their story is that they’d each been asked to be a part of a prank video, set up by a quartet of North Korean men who immediately fled Malaysia.

Assassins digs into their confounding defense, first presenting the killing as the world saw it play out: snippets of security footage and shocking headlines. Then, White takes us into the humble homes in Indonesia and Vietnam, where the women grew up. He speaks with their family and friends, laying out the rough lives they’d lived and the grand ambitions they had for becoming famous through silly Youtube videos. Giving background to the global politics at play in this case are expert reporters from England and Malaysia. They are familiar with the facts and mythology of the Kim dynasty and how to break it down for a pretty oblivious Western audience. Even the women’s attorneys frequently speak in English, knowing their story is being shared with the Western world. But to what end?

To Assassins credit, it leaps from nation to nation, strides through reign changes and royal rivalries, and hopscotches through a timeline laid out by smiling social media selfies and trepidatious text messages. White manages to draw a straight line through a story that could well seem a dizzying scribble. He does all this while not leaning into the sensationalism that made this story fodder for cheap TV news views. The story involves elements like political intrigue, sex work, conspiracy, and two beautiful 20-somethings whose necks are literally on the line with a death sentence hanging over them. Yet White present all this information with the restrained—almost stern—delivery of a librarian explaining the Dewey Decimal System.

That doesn’t sound exciting, does it? It’s not.

As informative as Assassins is, it’s also surprisingly dull as its tone feels suffocatingly formal. Perhaps this criticism sounds crass. After all, this isn’t some trashy tabloid story about royals being less than eloquent. A man was murdered…and his killers were either aspiring actresses moonlighting as merciless assassins or innocent scapegoats for a shady fraternal conspiracy. That should be more thrilling to watch than White makes it—not purely for entertainment value, but for the effectiveness of getting across his ultimate message. If audiences tune out or nod off, his conclusions will fall on deaf ears.

Once the case is wrapped up, White seems uncertain of how to conclude his documentary, and so turns to how Kim Jong-un has thrived in the wake of his half-brother’s assassination. A montage of Jong-un rubbing elbows from American President Donald Trump is surely meant to send a chill down our spines. But maybe I’m just numb to it now? Americans have spent over four years being bludgeoned by Trump’s horrific statements and actions, which include lauding the North Korean tyrant and publicly taking his side over the CIA’s. Thus, this would-be “gotcha” moment lacks impact. Perhaps if White had goosed the story’s big beats along the way with a bit more style, we’d be better primed for a big reaction. Maybe this movie need not be flashier, just more invested in the perspectives of the women at its center. Their relationship—which blossomed behind bars—is treated as little more than a sentimental sidebar in the final act. It could have been it’s beating heart. As it is, Assassins plays like a bland broadcast: really well laid out information in an endless barrage of horror and tragedy that’s more numbing than engaging. So in the end, even if you did learn something new about this case, you may not feel you’ve learned anything new about the world.

Assassins is on PVOD on January 15.

← 'WandaVision' Review: An Underwhelming Start to MCU's Phase 4 | Review: 'Locked Down' Is No Damn Fun →