Review: ‘The Banker’ is a Solidly Old-Fashioned Adaptation of the Remarkable True Story of America’s First Black Bankers

Indulge me in this: The Banker is a tortoise movie. It’s not exactly thrilling, not particularly fast-paced, and not really exhilarating. In Aesop’s fable, the tortoise is slow and steady, and something like Uncut Gems is the hare. Methodically sharing with viewers a remarkable true story about America’s first black bankers, who concocted a scheme to extend lines of credit and housing opportunities to members of their community who were denied these by white landlords and white financiers, The Banker is solidly well-intentioned, but only intermittently electric—and that’s mostly thanks to Samuel L. Jackson.

The Banker arrives on Apple TV+ this weekend after early controversy. Last year, when the film was to open AFI Fest in November and then move on to theatrical release in December, Cynthia Garrett, the half-sister of film producer Bernard Garrett Jr., accused him of sexual abuse, and the film’s premiere was canceled. I can’t find an update right now about how those allegations progressed, but it’s worth noting that Garrett Jr.’s name is not listed on the Apple TV+ press site for the film. 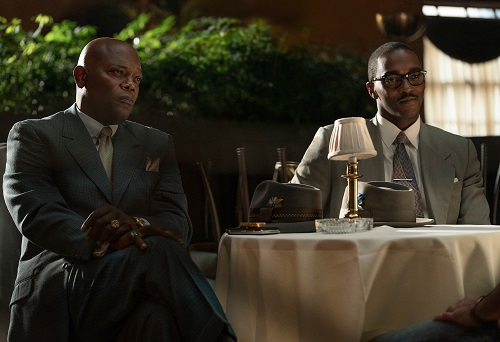 “Inspired by true events,” The Banker focuses on Garrett Jr.’s father, Bernard Garrett Sr. (Anthony Mackie, who you can also check out on streaming in the second season of Altered Carbon), introduced first to us in 1965 as a man fighting to clear his name. “They want to make an example of you,” he’s told; “I think you understand the stakes,” the white judge Garrett stands before stresses to him in court. After this initial scene that clues us into the drama to come, we travel back in time to 1939, to the small town of Willis, Texas, where a young Garrett shines shoes outside of a bank, takes notes on the advice he overhears, and jots down equations. A black security guard warns him about “spying on these white people’s business,” but Garrett is undeterred by that man, or by his skeptical father. He has big dreams, and they can’t come true in Willis.

Fifteen years later, Garrett and his wife Eunice (Nia Long) arrive in Los Angeles for the next step in Garrett’s plan. He’s not interviewing for jobs, and he doesn’t plan to rent a room from Eunice’s uncle for long, and he’s not pleased that Eunice has to go work at a jazz club owned by the bombastic, verbose Joe Morris (Samuel L. Jackson) to help pay their bills. Instead, he wants to own a building, and he knows that as a black man in the 1950s, he needs to be creative. He talks his way into a partnership with an Irish landlord and into a loan from the man’s banker because he knows that “normal business customs are in place to screw people” like him, as that landlord says. But for every early success, there’s a setback, too: money lost, his name smeared, and his race used as a reason for white people to double cross him.

Until Garrett swallows his pride and teams up with Morris, already an owner of numerous buildings throughout California, and comes up with a complicated scheme: What if the two of them ran the business from behind the scenes, and they brought in a white man as their public partner, to be the more socially acceptable face of their business? So enters Matt Steiner (Nicholas Hoult), a former furniture builder, into their team. Under Garrett’s and Morris’s tutelage, Matt begins to learn about banking, about rents, about mortgages, picking up on math he never understood before and memorizing long strings of numbers that would puzzle other people. With Matt on board, the trio seems unstoppable—but when their individual motivations no longer align, can they make the difference for the black community that they originally intended? 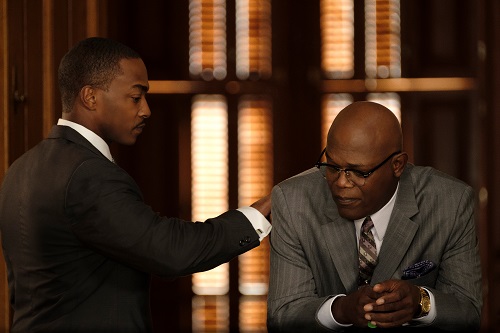 Mackie plays Garrett as a tightly controlled man who has done all the work needed to become the business magnate we watch him become, so purposefully level-headed that his bursts of emotion land even harder because of that precision (Mackie’s best display of this is, of course, his breakthrough role in The Hurt Locker; no, I don’t think Papa Doc showed as much for Mackie). As the droll straight man to Jackson’s lively Morris, Mackie’s dryness works quite well, bringing to mind the similar vibe between his Falcon and Chris Evans’s Captain America. But I’ll be honest with you: Banking math is not interesting, and real estate math is not interesting, and The Banker too often relies on scenes of Garrett spitting out formulas and montages of him wandering through neighborhoods to sell us on his expertise. People speak in nearly reverential tones about Garrett’s natural ability “knowing the untapped value of a building,” but how does that work? The movie doesn’t skimp on showing us the obstacles Garrett and Morris faced and the constant racism they battled, even from their inner circle, but too often Garrett’s boldness doesn’t land with as much impact as it could because the character is more figure than man.

Still, there are some bright spots in this exposition-heavy script. The best scenes are satisfyingly vengeful (like when Garrett figures out a way to buy the bankers’ own building from under them as a way to basically stick his thumb in their eye for refusing to lend him money), or when Jackson unleashes his natural charisma (as he smugly reveals to Garrett, after the man has called him a “degenerate,” that he’s already a landowner). Less successful are moments that try to ground Mackie and Jackson in the mid-century (a Photoshop of the two together with Vice President Lyndon B. Johnson is disturbingly bad), or that attempt to show Garrett as a family man. Mackie doesn’t have much chemistry with Long, but the two sell a marriage that is also a significant business partnership. As a father, though, Mackie only gets one significant scene in which he apologizes to his son—the aforementioned Garrett Jr., portrayed here as a child by Jaylon Gordon—for moving the family from California to Texas, where water fountains are still divided as “white only” and “colored only.” That one attempt to bond father and son, rather than showing us another facet of Garrett Sr.’s personality, just seems tacked on.

Overall, The Banker feels a bit stuck in its time, as if it was crafted in the same decades the narrative follows. There’s nothing edgy here, the script follows all the emotional beats you expect, and there’s no risk in terms of making its protagonists anything less than benevolent heroes. The film does not entertain, for even a moment, that these three men—who undeniably got rich off being landlords, as we see Garrett in particular buying larger and larger homes—might have been benefiting themselves from their business strategy. But maybe a story this reassuring regarding the goodness of certain people, this uncompromising in its depiction of right and wrong, is what we need right now. Look, at one point in the film, our two heroes literally drive off into the sunset. It doesn’t get much more old-fashioned than that, and if that sort of thing comforts you, then add The Banker to your self-isolation viewing list.

The Banker is currently streaming on Apple TV+ and in limited release around the U.S.

← 'What Are Some Moments in Movies that Make You Go 'Uh, It Doesn't Work Like That'' | 'Little Fires Everywhere' Tackles Motherhood, Love, and Teen Angst →