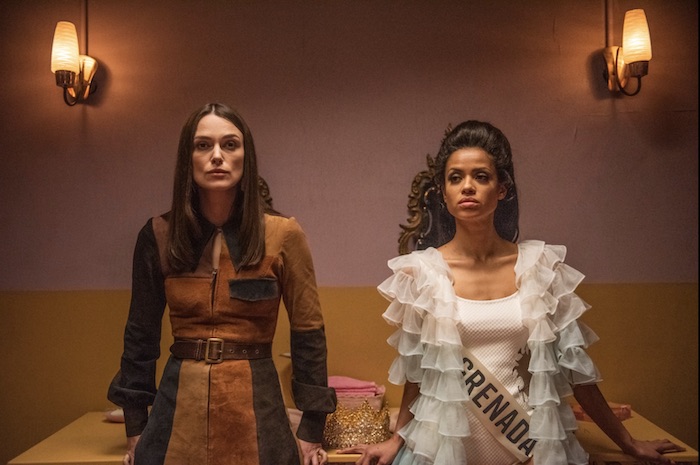 In 1970, back when beauty pageants were still at their height, the Miss World pageant crowned its first Black winner, Jennifer Hosten of Grenada. The contest also made headlines for being interrupted by Women’s Liberation activists, who heckled host Bob Hope with flour bombs. Misbehaviour, the latest film from director Philippa Lowthorpe, recounts both sides of the eventful evening as a star-studded ensemble story that makes for a generally pleasant if quite conventional feel-good viewing experience.

Although on the whole, it takes a rather on-the-nose, deeply familiar approach to feel-good feminism—heroically scrappy female activists get the better of sleazy one-note male chauvinists—Misbehaviour does bring up a few surprisingly challenging points with regard to feminism and intersectionality. It makes the smart decision to tell both sides of the Miss World 1970 story and highlights the inherent tension between the perspectives of the Black contestants, who view the pageant as a means to the end of demonstrating that Black is beautiful on an international stage, and white activists who only see the suppressive yoke of the patriarchy.

To be sure, Misbehaviour addresses these tensions quietly, with some degree of timidity, and whenever in doubt errs on the side of consumer-friendly empowerment warm-and-fuzzies. It shies away from certain elements of the controversy surrounding the 1970 Miss World Pageant, such as the outcry over how the inclusion of Eric Gairy, the Prime Minister of Grenada, in the judging panel influenced the pageant’s outcome. While going so far as to show Gairy (Clarence Smith) wheeling and dealing his way into the judging panel in the lead-up to the event, the film chooses to mostly ignore the substantial fallout, begging the question of why it bothers to include this part of the story at all.

Still, while in many ways Misbehaviour is a very familiar sort of film, most of its kind to date generally avoid any grey zones at all. Some progress on this front is still, ultimately, progress, and is worth commending. Could the film hit on certain points harder? Definitely, but it’s also very easy to imagine a fully toothless version of this film that just goes straight for the low-hanging fruit of broadly, blandly self-congratulatory, vaguely feminist fluff, no chaser.

While giving viewers the common courtesy of some actual food for thought, Misbehaviour is the sort of well-made, decently paced, easy viewing film that’s eminently watchable if not exactly groundbreaking, especially thanks to its stellar cast.

Keira Knightley handles the rather straightforward role of academic-turned-activist Sally Alexander commendably well. Particularly when inciting the heckling at the pageant, Knightley shows a remarkable knack for comedic timing that begs the question as to why she hasn’t taken on more comedies, because there’s definitely an aptitude there.

As radical activist Jo Robinson, Jessie Buckley drops into the story like a fairy godmother bestowing the gift of second-wave feminism. Her character can sometimes feel like an overly convenient mouthpiece, but Buckley brings a mischievous charm to the role that’s nonetheless compelling.

While ultimately an ensemble story, Misbehaviour leans heavily toward Sally Alexander and her radicalization, only really introducing the history-making pageant contestants in the direct lead-up to the actual competition. The role of Jennifer Hosten doesn’t give Gugu Mbatha-Raw all that much to sink her teeth into from a performance standpoint—she came, she saw, she conquered, the end—but she brings gravity and poise to the table as the winning beauty queen. Greg Kinnear, meanwhile, plays an impressively oily Bob Hope, with Lesley Manville making a welcome appearance as his long-suffering wife Dolores.

All things considered, Misbehaviour is well-made, family-friendly easy viewing that’s a great pick for a movie night when no one wants anything too heavy. It’s not going to blow your mind, but it will keep you pleasantly entertained for a little over an hour and a half, and that’s nothing to scoff at.

Misbehaviour is available on PVOD.

← Bruce Springsteen's New Song, 'Ghosts', Absolutely Destroys Me | In Praise of Binging with Babish, the Best Cooking Show on the Internet →