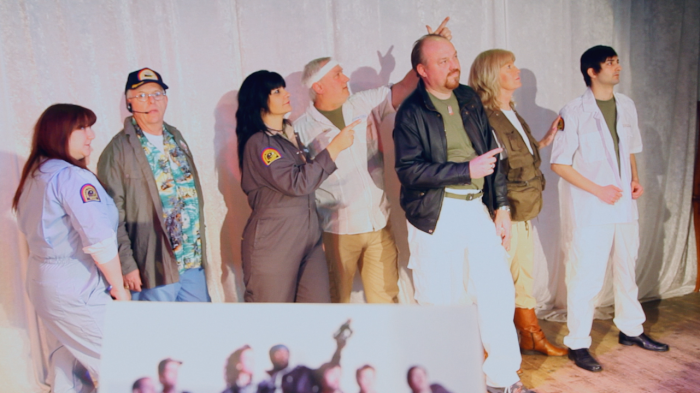 Review: 'Alien on Stage' Is Exactly What You Want When You Hear "A Documentary About A Local Theater Production of 'Alien'"

Sometimes, one sits down to watch a documentary hoping to learn something new. Sometimes it’s about digging into an important issue or story, where we the viewer are looking to the filmmakers to unpack something significant about humanity or our world. But sometimes … sometimes one just wants something really weird and random. Some dumb fun. And Alien on Stage delivers perfectly.

About two hours west of London is a little town called Wimborne. And there’s a thriving local theater community in Wimborne that is “community theater” in all the best ways. What the local theater lacks in budget or “professional” theatrical skill they more than make up for with enthusiasm and good spirit. One year, this group decided to stage a theatrical version of the movie Alien because why not? In fact, they thought that their staging of this popular film would be a smashing sellout. Who doesn’t want to see chest-bursters and face-huggers live on stage?

Well, their first show had about twenty people in attendance, so initially the answer was, confoundingly, “not many.” In fact, the prior year’s staging of Robin Hood put this disappointment to shame, and unless that staging had an actual fox playing Hood, that should not be the case.

But then a funny, and in retrospect not wholly unsurprising, thing happened. People started to hear about it. A fan club was started. The filmmakers eventually responsible for this documentary came out to a show and fell in love. And suddenly, this weird little show which is as low budget as can be (albeit with some impressive stagecraft born out of nothing but ingenuity and local supplies) had a small movement behind it. Finally, it was getting some love, and suddenly there was a movement with a goal - to get Alien staged on the West End (London’s Broadway).

It’s not a spoiler to tell you that they pulled it off for a one-night staging at Leicester Square Theatre that looks like an absolute blast. It’s not a spoiler because that’s not remotely the point of this documentary, to wonder about what happened. Rather, the point is to bask in the joy of it. Everything about the making, performance, and watching of this play is done by people who are in on the joke. Everyone understands exactly what this is - for example, when Kane comes out for the chest-burster scene so very clearly rigged up for what is about to happen, everyone laughs and cheers in anticipation. The audience and the film do not make fun of this low-budget silliness, they wholly embrace it.

In fact, the last half hour of the documentary shows, many highlights of their West End performance (including that chest-bursting scene), and it looks perfect. In fact, my only complaint about Alien on Stage is that it left me feeling a little wistful. I wish I could have been in that West End theater watching this live, and I wish I could have been in an Austin movie theater with my friends, watching this documentary live. Ultimately, Alien on Stage is a reminder to take joy where you can find it. As things slowly return to normal and we are able to start seeing our friends again and go to things, it’s also a reminder to cherish those moments of live communal entertainment, and to keep your face far away from surprisingly well-made giant green Styrofoam eggs.

Alien on Stage had its world premiere at SXSW Online 2021 and doesn’t have distribution yet. Here’s hoping it shows up on a streamer sooner rather than later!