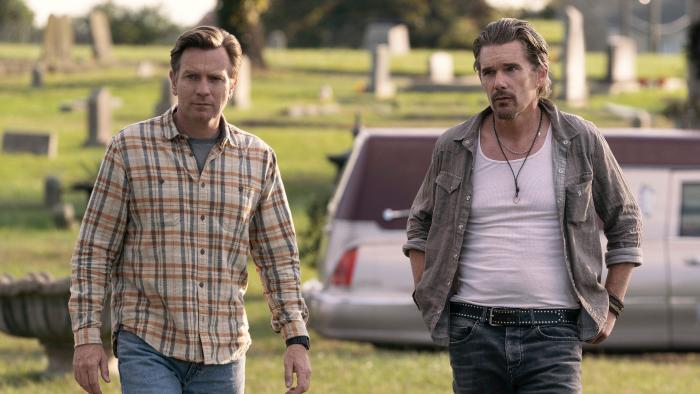 'Ray and Raymond' Is a Movie That Exists on Apple TV+. You're Welcome

Ray and Raymond stars Ethan Hawke as Ray and Ewan McGregor as Raymond, estranged(ish) half-brothers who reunite to attend the funeral of their father, whose last wish is for the two to dig his grave. It’s fine. It feels like what it is: A movie written for film festivals that will wind up in a streaming network where it will probably quietly languish in obscurity, save for Ethan Hawke and Ewan McGregor completists.

The half-brothers discover their asshole of a father has a few more secrets (more half-brothers); Ray plays jazz trumpet; and Raymond sleeps with his father’s ex-girlfriend, which I think is supposed to feel satisfying because their father slept with Raymond’s wife (Raymond’s son is actually his half-brother, and so he gets revenge on his late father by sleeping with the mother of another of his half-brothers. Okay.)

Again, it’s fine. Hawke and McGregor are fine. Writer/director Rodrigo García does fine work; it has a beginning, a middle, and an end. I didn’t hate it, but I don’t have anything glowing to say about it, either. If you have nothing better to watch, it’ll do the trick.

I wish there were more to say about it. There are a lot of half-brothers in it, which reminded me that my father had an estranged half-brother from my grandfather’s previous marriage that no one ever spoke about. I spent half an hour on the Internet trying to find his name only to come up empty. It’s weird; if you died before the Internet, it’s almost as though you never existed, unless you had a strange uncle who posted overly detailed family trees to the Internet, but even most of those died after Yahoo zapped Geocities.

Speaking of half-brothers, the best thing about Ray and Raymond was not the movie itself but an interview Ethan Hawke had with Mike Ryan over on Uproxx. Mike is a solid dude, and one of the best interviewers in the game (I’ve written about him a few times over the years). Mike lost his father a few years ago, and he took it hard, but he also found out when his father died that he had a half-brother whose name is … also Mike (their father’s name, likewise, is Mike).

Mike is the exact audience for this film, and Mike ended up using his interview with Hawke as a sort of therapy. Not as a gimmick, but genuinely as therapy. As Mike’s interviews often do, this one takes a journey that ends up nowhere in the neighborhood of Ray and Raymond. I love that both Mike lets it go off course and Hawke ends up going with it. It’s a great interview and reason enough for Ray and Raymond to exist.

Ray and Raymond is streaming on Apple TV+.


← Review: 'Avenue 5' Returns for Season 2 and Does Not Disappoint | Kanye Kicked Out of Skechers HQ After Unannounced Visit →