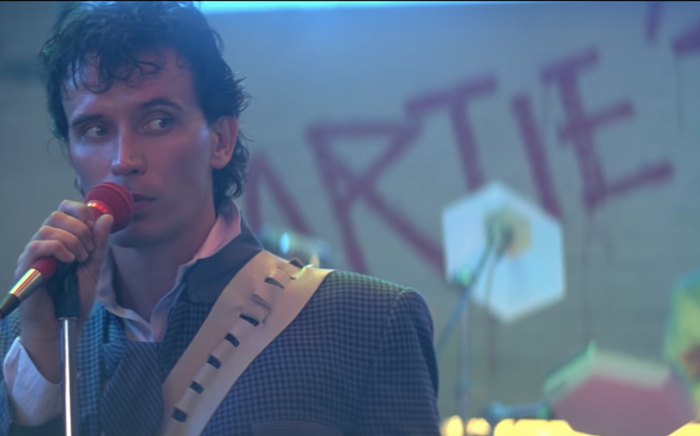 Like many of you, I really, really love The Adventures of Buckaroo Banzai Across the 8th Dimension, not because it’s a quirky, weird film, but because it’s a movie that considers you smart enough to drop you in the middle of its world with no explanation, and just expects you to catch up because that train already left the station before you arrived. Also, Perfect Tommy, who is perfect.

OK, it is a quirky, weird film, and that’s also why I love it. Nothing has ever made more sense to me in my entire life than the following exchange about a watermelon, which is a classic for a reason, OK?

In short, I have always felt very seen by this movie, which I first saw when I was about 18. Friends, it shook me to my core once I knew who Buckaroo was, that his story was not an international franchise film with dozens of movies that came after it, ala Star Wars. I mean, what is it about a ragtag team of scientists who are also rock stars who also solve mysteries set forth by evil inter-dimensional aliens all with the first name John that doesn’t appeal to you? (For the record, I always thought the best bad guy “John” names were “John Smallberries” and “John Bigboote” because those are objectively the best. Duh.)

It doesn’t help that the movie ends with a promise: Buckaroo will be back in the next installment, Buckaroo Banzai Against the World Crime League. A promise of a better time, a better world, that would sadly, never be fulfilled.

Friends, that is a promise unfulfilled because we cannot have nice things in this life, sometimes, videos of sloths eating notwithstanding.

It is a rare month that goes by that I don’t think about what could have been with the promised sequel.

So, if we were able to have nice things, what would the sequel have entailed?

Honestly, your guess is as good as mine because there’s not a lot of info out there on what could (and should) have been. Again, because nice thing and this timeline are not compatible. You know what was compatible? Buckaroo and Penny Priddy.

Back in the day, when I first saw this movie during the baby ages of the internet (pre-Pajiba, even, friends) the rumor was that Big Trouble in Little China was the butchered plot and script for Buckaroo Banzai Against the World Crime League, but this random guy on the internet tells me that’s a lie. So it probably is. Always trust random men on the internet, unless they are DM-ing you on Twitter to ask you if they can buy you fancy things if you’re mean to them.

Of course there’s the long-rumored, on-again, off-again Amazon series that Kevin Smith was supposed to be helming, but I’m not really sure I want the guy who wrote Chasing Amy to take over the narrative of my beloved Buckaroo, a character who once stopped a set, on-stage, because he saw a lady crying. It sounds like it’s off, permanently, though.

Anyway, the point of all of this is that promised yet never fulfilled sequel haunts me to this day. I wonder what it would have been about, who would have starred in it, and what weird, quirky details it would have contained. Hopefully, they would have only added to the mystery of the watermelon and never explained it, because we all know, the explanation could never live up to the mystery of what was promised. Kind of like this sequel.

I can’t think of any other unrealized sequel that bothers me more. Maybe now it will bother you too and we’ll be in this together, or maybe you have a different film in mind. Like Xanadu.

That’s your business, though. Feel free to share it if you want. In the meantime, here’s some more Buckaroo.

← The Cast Of 'IT: Chapter 2' Looking Over Their Press Junket Interviews | Will Joaquin Phoenix Give Bradley Cooper What Lady Gaga Never Could? →