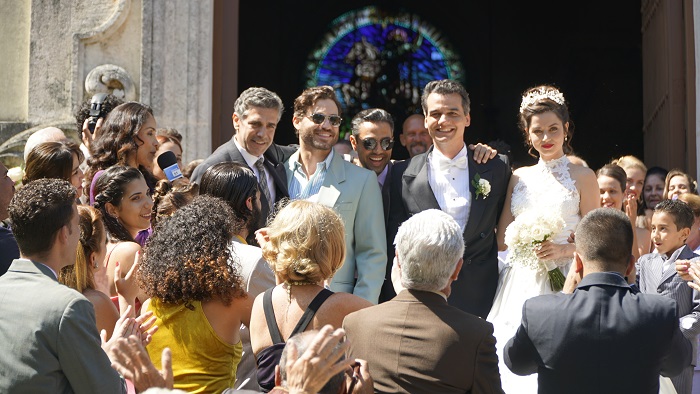 I sometimes do not exactly understand how Netflix markets movies, which is a polite way of saying that I’m still sort of pissed that Netflix gave away the twist of Olivier Assayas’s Wasp Network in the blurb for the film on its platform. Wasp Network is an imperfect movie, but one I haven’t stopped thinking about in the weeks since I saw it—Assayas’s script has a particular line of dialogue that stays rattling around my brain. And I wish I had gone in totally blind, rather than being spoiled of a major hidden component of the film’s perspective. 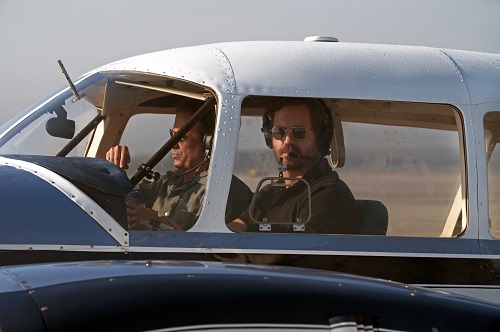 For the first hour of its run time, Wasp Network is one thing: A film about a group of Cuban expats living in the United States in the 1990s who are involved in Cuban resistance and attempts to overthrow Fidel Castro’s Communist government. We see how pilot René González (Édgar Ramírez) defects by climbing into his plane and flying to Florida, where he calls a press conference. “I’m an American citizen and I’m very proud of it,” he announces, sharing that he was born in Chicago. The wife he left behind, Olga Salanueva-González (Penélope Cruz), is staggered by his betrayal and his abandonment of her and their daughter. René goes to work with José Basulto (Leonardo Sbaraglia), head of the nonprofit organization Brothers to the Rescue and described here as the “arch-enemy of the Cuban Revolution.” The pilots of Brothers to the Rescue fly into Cuban airspace, drop fliers against Castro, and save Cuban defectors traveling to the U.S. in rickety rafts. Through that work, René also becomes familiar with the Cuban American National Foundation, an exile organization that has links to the anti-Castro terrorist Luis Posada Carriles (Tony Plana), who was trained by the CIA. 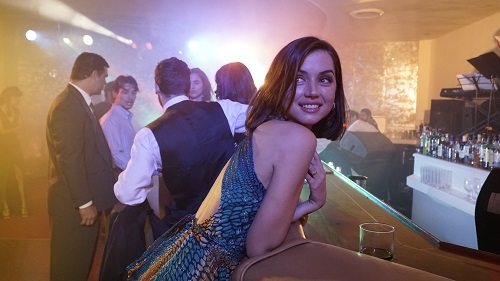 Over time, René becomes close with Juan Pablo Roque (Wagner Moura), another Cuban expat who swam to Guantanamo Bay and turned himself over to the American military stationed there. Now in the U.S., former Cuban officer Roque is famous, and living large thanks to the checks he receives from the FBI for his role as an informant on fellow Cubans. His wedding to Ana Magarita Martínez (Ana de Armas, Cuban herself) is a major event in their community—extravagant, clearly expensive, with much media attention. (“Did anyone tell you you look like a movie star?” is Ana’s flirty opening line to Roque when they meet, which is a hilarious line coming from the absolutely staggering de Armas.) At the wedding reception, Roque and Ana pose for a photo with Jorge Mas Canosa (Omar Ali), the founder of the Cuban American National Foundation, the man who funded terrorist attacks on Cuban soil as a way to destabilize the regime. The three of them are beautifully dressed, in a gorgeous art deco mansion, celebrating a new chapter in Roque’s and Ana’s lives, but there’s spilled blood and complicity, too. 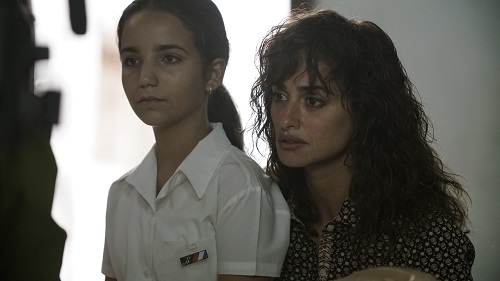 Up until this point, Wasp Network has shown the difficulty of getting a foothold in the U.S. economy as an immigrant and rebuilding a life here as an adult. And equally poignantly, the film captures the specifically Cuban experience of feeling caught between two beliefs: nostalgia and longing for a way of life that no longer exists anymore under Castro’s regime, and a begrudging acceptance that there are things about the Communist government that might be worth respecting. A certain clarity of purpose, and a certain ideological frankness. But of course, life in Cuba is staggeringly difficult. Olga struggles to find food for herself and her daughter. Her job at the tannery is taxing, physically demanding work. Assayas forces us to wonder: Which one of these lives, American or Cuban, is really “better” than the other? Or is measuring your days in terms of ease the wrong way to consider the purpose of living?

But here’s the thing: Netflix’s blurb about Wasp Network ruins all this tension—the friction between René and Olga; Ana’s increasing curiosity about how Roque is able to afford all they have, from their beautiful home to his new Jeep to his gold Rolex; and the increasingly militant methods of Brothers to the Rescue, the Cuban American National Foundation, and their connections to drug smugglers in Central America—by letting you know Assayas’s twist: 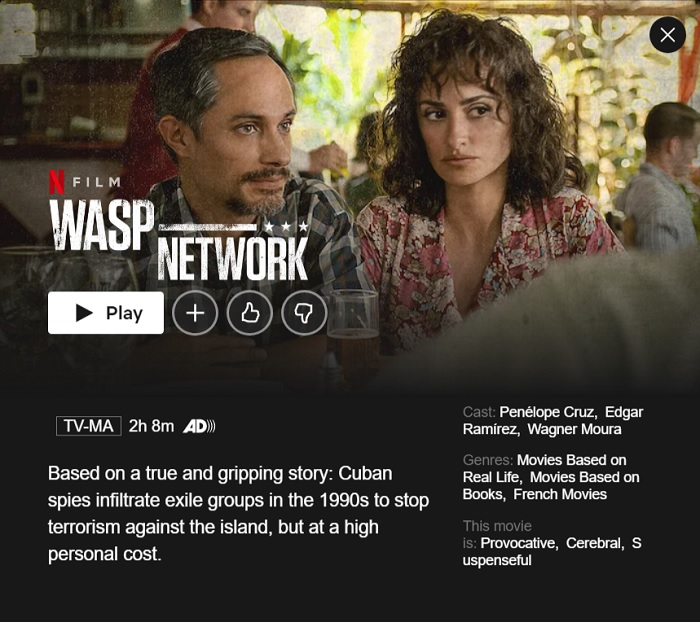 Yes! You read that correctly! René and Roque were Cuban spies all along, ordered by the Cuban government and their handler, Gerardo Hernández, also known as Manuel Viramontez (Gael García Bernal), to fake defections to the U.S. and infiltrate exile groups to report back on their activities. That reveal comes about an hour into the film and helps us understand that those spies are the titular Wasp Network. It should come out of nowhere! But Netflix gives it away, and I wish they hadn’t—Assayas’s obfuscation would have hit so much harder without any clue beforehand. It helps that Cruz and Ramírez in particular are so damn good, so measured and nuanced, that I don’t think their performances tip you toward the truth until it’s right in front of your face. Assayas even uses a jazzy triple split screen to show us Gerardo/Manuel, René, and Roque going about their business, and it’s very visually clever! It would have been cool to see that without any advance knowledge! 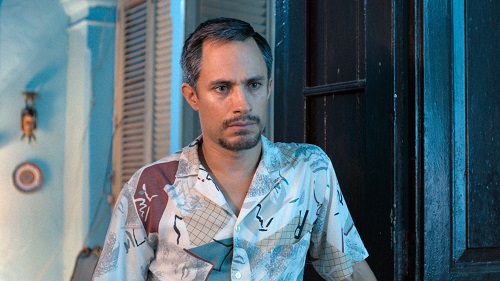 Anyway, the second half of the film follows the American government’s increased awareness of their activities and their eventual arrest of René, Gerardo/Manuel, and other operatives; Roque had already returned to Cuba by that point, lying to Ana’s face and then never giving her a second thought. And with that awareness, then, the first hour of Assayas’s film takes on increased complexity. When René said that “In Cuba, everything’s short. Electricity, food, everything. Potatoes, rice, even sugar. … I don’t want to go on living like that,” there had to be some awareness by the Cubans who wrote those words as a false rebuke that they would resonate with an American audience, who measure worthiness in plentifulness. When Assayas shows us René cleaning a pool, going home to eat alone in his sparse apartment, and then writing to Olga in a letter she doesn’t answer, “This is a land of opportunities. There are plenty for all of us,” it’s an ironic moment. The Cuban side of things isn’t presented as a paradise, either; we see the bureaucratic hoops Olga must jump through when she tries to reunite with René.

But what is unique about Assayas’s film is that it dares to suggest that the Americans’ involvement in these things—in imposing what the film calls a “brutal embargo,” or in training Cuban terrorists to attack their own countrymen—is really quite bad, and not a position of greater moral authority. As a filmmaker, Assayas has long been interested in how the personal is always political and the political is always personal; there is no real line between these things. (If you haven’t seen his epic Carlos about the Venezuelan terrorist Carlos the Jackal, also starring Ramírez, you should.) And so in its expansiveness, in the cast of characters that Assayas keeps adding to, in the web of various subplots that he’s weaving, Wasp Network explores all the different manifestations of the collapse of that internal political vs. personal barrier. For the Cuban expats fighting against Castro, it’s in their “ends justify the means” approach, how they align themselves with the CIA and the FBI and Central American gangs and drug runners to fund their efforts, how they charge exorbitant amounts to Cuban expats to smuggle them over to the U.S. The morality there is murky, but of course, it could also be argued that the Cuban government sending over their own spies to investigate all this is murky, too. None of this is black and white, not really. It’s all shades of gray, and it always has been, and it always will be.

All of that feeds into the line I can’t stop thinking about, and the scene in Wasp Network that has stamped itself onto my consciousness. It’s near the end of the film: René has been in U.S. custody for a year, and the federal government is threatening Olga and the couple’s older daughter with deportation back to Cuba. The deal offered to René is this: Cooperate with the Americans, provide information about the Cuban government, about the Wasp Network, about secrecy and subterfuge, and Olga and both their children will be able to stay. Meeting to discuss the deal, Olga and René kiss through the glass, over and over again. René shares that other members of the Wasp Network are cooperating, but that he won’t divulge information about anyone.

Olga: “Even those who testify against you?”
René: “Their morals aren’t mine.”

“Their morals aren’t mine.” It’s just four words! But the line’s effectiveness is that very efficiency: It so perfectly captures René’s entire philosophy, and his refusal to turn his back on his beliefs. He’s been involved in it all—he’s been on both sides—but he won’t abandon what he knows or who he is. His and Olga’s hands reach for each other against the the glass, pushing up against that divider as if to break it and finally feel each other after so long. The personal is always political, and the political is always personal. René says “Their morals aren’t mine,” but it could be uttered by anyone in Wasp Network, which is what magnifies its brilliance: By José Basulto, Luis Posada Carriles, or Jorge Mas Canosa, who have devoted their lives to fighting Castro, or by Castro himself, who sees those men as enemies to the cause. By Roque, who so cruelly used Ana, or by Ana herself, who saw her dreams of a happy ever after abused by a man with his own agenda. By Olga, who for years thought that René had left behind both her and their country, and who vows to stand by her husband once he’s made that choice—“I won’t let you go through this alone” is a declaration of her love, too.

Wasp Network concludes with a check-in on its various characters, on the sentences they served or the punishments they received, and yet something about that afterward feels immaterial to this story. There are consequences to these actions, and they shouldn’t be ignored; think of how hard-hitting that final season of the similarly themed The Americans was. But everything you need to know about this historical period, about its players, and about their oppositional motivations is captured in that “Their morals aren’t mine,” and Wasp Network enthralls by peeling at the layers that build such unwavering ideological certainty.

← Reddit asks the Question: 'Which Fictional Character Never Fails to P*ss You Off?' | Get Ready for Four Months of Trump's Nonsensical Culture War →