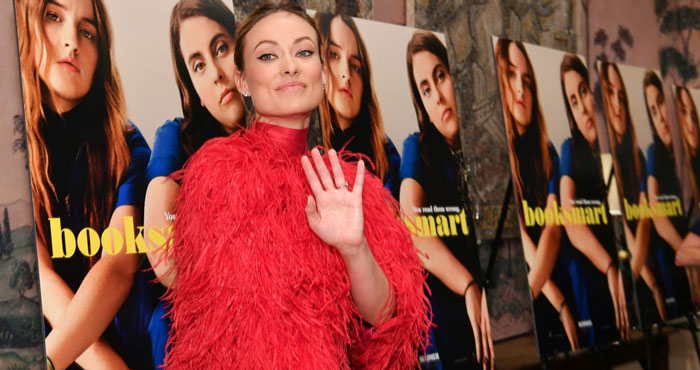 Ever wonder who is in charge of the airline edits of your favorite movies? So does Olivia Wilde. Earlier this year, the leading lady made her directorial debut with Booksmart. The critically heralded coming-of-age comedy starring Kaitlyn Dever and Beanie Feldstein won critical praise and is now available on DVD, streaming, and flights across America. But before you select Booksmart from that touch-screen on the seatback, be warned: this is not Wilde’s cut of the movie.

Wilde was shocked to watch her movie cut into senselessness by an unknown editor that heavily censored of Booksmart’s central elements: female sexuality. She took to Twitter to sound off on this ruthless and homophobic butchering of her proudly feminist and queer film.

Spoiler for Booksmart below:

I finally had the chance to watch an edited version of Booksmart on a flight to see exactly what had been censored. Turns out some airlines work with a third party company that edits the movie based on what they deem inappropriate. Which, in our case, is … female sexuality? 🤔

— Most disappointingly, they cut most of Amy and Hope’s love scene in the bathroom, which involves zero nudity, but does involve an essential plot point for a lead character. Wtfffff.

What message is this sending to viewers and especially to women? That their bodies are obscene? That their sexuality is shameful?

Here’s how Booksmart’s leading ladies responded to news of the edits.

Kaitlyn Dever and Beanie Feldstein will "get to the bottom" of #Booksmart's queer storyline being removed from an airline version: "@oliviawilde's on the case, something will happen. She's a powerful woman" #GovernorsAwards pic.twitter.com/0h4OaPGgrq

The condemning of female sexuality and queer identity is nothing new in cinema censorship. The Hays Code invented in 1930 started curbing sexual content—and other taboo topics—in film in hopes the government wouldn’t intervene with censorship mandates. That gave rise to the Motion Picture Association of America or MPAA, which is responsible for creating our current rating system of G, PG, PG-13, R, and NC-17. But beyond rating films, the MPAA’s mysterious members—none of whom are publicly known—also give notes to the studio warning what in their cut will get them a higher rating. This leads to superhero movies with massive violence but no blood. It also means movies that depict female sexual pleasure or homosexual content are more likely to be labeled with an “R” or “NC-17,” labels that make a movie less marketable by slicing out the under 17 demographic completely. Famous examples of such bias include Blue Valentine, which received an NC-17 rating because of a scene where Ryan Gosling simulates oral sex on Michelle Williams, and giving the gay romance Love Is Strange an R-rating despite no explicit sexual content. The MPAA’s secrecy and biases are doggedly detailed in the dynamic documentary This Film Is Not Yet Rated, which is definitely deserving of your time.

However, the MPAA does not edit the films. It exerts pressure through notes and the implication that a higher rating could hurt the box office, but does not actually touch the film. Nonetheless, whoever these third party editing facilities are, they seem to be playing by the MPAA rule book, which is ambiguous, biased, and clearly finds two teen girls sexual awakening something not fit for airline viewing.

One of the offending airlines is Delta, which makes sense as I recently watched Rocketman on a Delta flight and found its language crudely clipped and sex scenes trimmed to the point of losing plot points. Through a statement, Delta told Digital Spy they don’t expressly “ask for the removal of homosexual content” from the films they offer. However, in 2016, the Delta version of Carol came under fire for cutting kisses between its lesbian lovers. At the time, Delta explained to After Ellen that the studio offers them an unedited version and an edited one, noting, “Delta doesn’t have the rights to edit the movie or to make the decision to keep some of that content.” Because Delta didn’t want to run the actual sex scene in Carol, they opted for the censored one, which cut the kissing too.

There is one argument in favor of the censored cut that’s not about the shaming of female desire or homophobia. Which is: it can be awkward to watch sex scenes when you’re sitting elbow-to-elbow next to a total stranger! As someone who watched an uncensored You’re The Worst on my laptop while flying, I can attest that it can be awkward! However, there’s already a “proceed” button built-in that can give audiences an out. Just as the MPAA rating has a warning about the content within a film, airlines could have their “proceed” screen give a heads up of content. Heads up: there’s going to be a sex scene or explicit nudity or on-camera drug use or extreme violence. Why not do that? Give audiences an informed choice. Is it because they’d have to face whether or not include “queer content” as a warning? Gee. Maybe then they’d actually have to pick a side instead of shoving the blame off onto studios or mysterious third parties.

← Aaron Sorkin Is Right About Facebook, But It's Not the Whole Story | A Clearer Picture Emerges Around Weiss and Beniof's Decision to Leave 'Star Wars' →