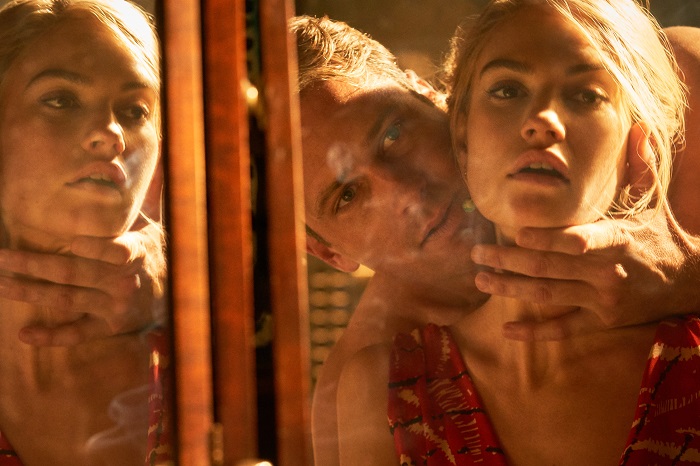 I said it already in my headline, but I think I need to reiterate: Why remake Rebecca? It is a masterpiece. It is a paragon of Goth spookiness, the urtext for films like Crimson Peak, which shares so much of the DNA of Rebecca that I can only assume Guillermo del Toro is as into Daphne du Maurier as Alfred Hitchcock was. It does the unreliable narrator thing well, and the “rich people problems are ridiculous” thing well, and the is-it-a-ghost-or-is-it-just-guilt? thing well. (Looking at you, Mike Flanagan’s entire filmography!) The 1940 version of Rebecca is very good, and the 2020 version is not.

“But, Roxana, you said, ‘I don’t care about Alfred Hitchcock’. You talk all the time about expanding pop culture and cinema into realms that aren’t only tied to old white men. Are you a hypocrite?” And look, dear reader, MAYBE. MAYBE I AM. So let me also say that even putting aside Hitchcock’s Rebecca as a comparative, this latest version from Ben Wheatley is distressingly anemic. Lily James and Armie Hammer have no chemistry. Hammer himself is miscast, never really mustering the depths of volcanic anger needed for his character. Ann Dowd is here, doing too much acting. The costumes are drab. The production design is unspecific. The film’s final scene is offensively bad. I think this version is supposed to be sexy, because James and Hammer kiss a lot? It is not sexy. Rebecca made me hate kissing, actually. I never want to see an actor kiss another actor again!

(Edit: Unless Riz Ahmed wants to kiss me, and then I will become an actor. That is my personal sacrifice, and I am willing to make it.)

Anyway, let’s talk about Rebecca, I guess. An adaptation of du Maurier’s same-named 1938 novel, the film begins in Monte Carlo, the playground of the rich, where a young woman (James)—purposefully never named in the book, nor in subsequent adaptations—is the traveling companion of the fabulously wealthy, absolutely garish Mrs. Van Hopper (Dowd). Mrs. Van Hopper is a straight-up bitch and social climber who delights in pushing around James’s character and forcing her to do her bidding for her measly 90 pounds a year. When Mrs. Van Hopper learns that the recently widowed Maxim de Winter (Hammer, falling here only on the “tall” side of the eternal “Is he hot, or is he just tall?” debate), who had been married to a woman named Rebecca—gushed about and mourned by seemingly everyone—is staying at the same hotel, she tries to elbow into his good graces before falling ill. With Mrs. Van Hopper stuck in bed, her companion and Maxim become close: Yes, they come from entirely different worlds. She barely speaks French, which, you know, means she’s poor and unsophisticated, but she’s full of random facts about things, and she can’t stop asking questions about Max’s life, and that is enough to make someone fall in love, I suppose. 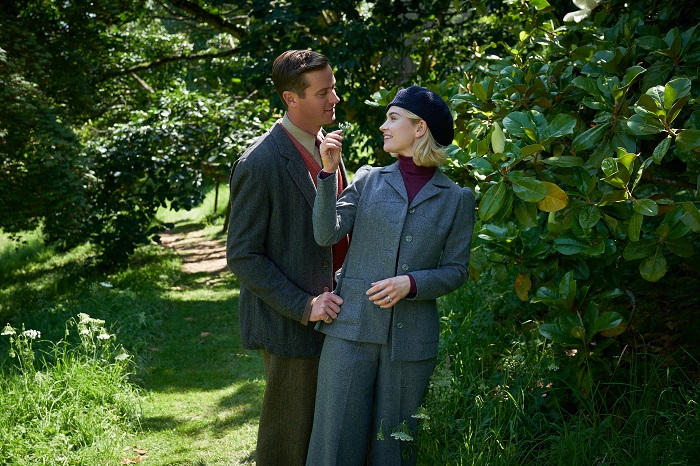 Did I mention Max is rich? He is very rich. He has a gigantic familial estate, Manderley, overlooking the sea in England, with which everyone is obsessed. And he is very sad and alone after Rebecca’s death a year or so ago. He is kind to the companion, which makes him a Good Rich Person instead of Mrs. Van Hopper, who is a Bad Rich Person, and soon Max and the companion are experiencing one of those really terrible PG-13 sex scenes where we only see people’s mouths and not anything lower than that. And after they have sex maybe, like, twice, they decide to get married because That’s How Things Were Back Then and also really because the companion wants to tell Mrs. Van Hopper to fuck off. Mrs. Van Hopper’s parting shot, though, is about Rebecca, whose beauty and wit and glamour and cleverness live on, even after her death. “He nearly lost his mind after she died. It was all too sudden and tragic. Do you honestly think he is in love with you?” Mrs. Van Hopper asks, and then BYE, Mrs. Van Hopper, I am happy you are gone, Dowd’s performance here is terrible and grating and boorish. BYE.

So yes, Max and now Mrs. de Winter (I am shortening it here to MDW, so I don’t have to keep typing it out) return to Manderley, which I must admit is not very opulent? The production design here is uninspired; it needed to be more Downton Abbey, but it ends up more The Woman in White, and real ones will know what I mean by that. MDW immediately feels out of place: the wait staff is distant, Max has a lot of Rich Person stuff to do (signing documents for, like, hours at a time), and she meets a true enemy in Mrs. Danvers (Kristin Scott Thomas, working some welcome Only God Forgives energy). Formerly Rebecca’s closest companion, a mixture of motherly figure and lady’s maid, Mrs. Danvers runs the household, and she is aghast by the new MDW. Her outfits are dreadful—LOFT-quality slacks and Peter Pan collars and spacedye sweaters. Her lack of—here’s that word again—sophistication is galling; she doesn’t even know what sauce to serve with veal! And, you know, I have to side with Mrs. Danvers here. MDW has absolutely no personality whatsoever, literally no identifying traits or recognizable qualities of her own, and sorry, Rebecca actually seemed pretty tight!

Increasingly obsessed with the idea that Max still loves Rebecca, MDW tries to learn as much as she can about her. What kind of lingerie did she wear? What kind of parties did she plan? How did she die? You know, just the normal stuff. And as MDW tries to learn more about Rebecca and become closer to her husband in the process, things get weird. Mrs. Danvers is clearly hiding something, and working to undermine her new mistress. A seaside cabin that used to be Rebecca’s includes no pictures of Max, but does house a small portrait of another man. Max sleepwalks each night into a part of the house that Mrs. Danvers didn’t show MDW on the estate tour. MDW dreams of a strident woman in a long red satin gown, wandering the grounds. Is Rebecca still at Manderley?

If I am making any of this sound interesting, I apologize. It is not! The character development is so listless that there’s no tension at all, no dread—which, yes, Hitchcock’s version did well, but it’s also integral to the core story! This is a melodramatic tale of class disparity and imposter syndrome and compulsive jealousy and explosive fury, and the execution here is just … tepid. Lukewarm. MDW is meant to be the sort of character that we transfer ourselves onto, but her characterization here has no shade, no depth. People talk so much about what MDW can’t do—can’t cook, can’t hunt, can’t ride, can’t speak French—but we don’t know anything that she can do. Is that purposeful, to show that Max would have married any warm body? Possibly, but the film’s hilariously ill-fit happy ending doesn’t support that theory. Similarly, Max should be alluring, magnetic, and somewhat threatening, a person with so much force that you can’t help but be drawn in by them. Neither James nor Hammer rise to the occasion. If they had more heat together, I could legitimately buy that her character was so dickmatized that she would go along with whatever Max wanted. Or if her character was shown to be more enthralled by the world of wealth and prestige that Max offered, then I could understand her loyalty as a way to get those ducats. But as it is, nothing about their romance reads as particularly authentic, so how tightly MDW binds herself to Max in the film’s third act is puzzling. 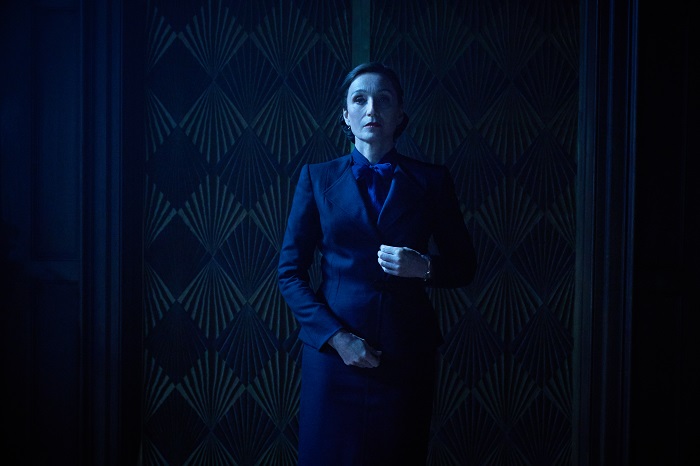 The only thing Rebecca has going for it is its villains. Thomas is tightly, deliciously wound as Mrs. Danvers, a woman whose sartorial crispness and precise cruelty stand not only in contrast to MDW’s blandness but act as a representation of what Manderley is supposed to be. Her character is made to do some annoying things—like caressing MDW’s glove and Max’s suit jacket, ostensibly a way to show her coveting of their status?—but Thomas handles those moments as gracefully as she can. The scene where she brushes MDW’s hair as an intimidation tactic is surprisingly effective. Also in the Bad Rich People column, more space should have been made for Sam Riley’s Jack Favell, a grinning schemer whose disdainful cigarette flicking is the film’s most sensual moment. Shout out to Jane Lapotaire, who plays Maxim’s Granny and gets the deepest cut of the film when she literally laughs at the idea of MDW being Max’s wife. “No, she isn’t. My goodness!” she exclaims before dissolving into peals of laughter, and that sort of friction is exactly what Rebecca needed more of.

There is so much more Wheatley could have mined out of Thomas’s version of Mrs. Danvers, a woman who believes Manderley is owed to her, and whose characterization raises as many questions about generational inherited wealth and patriarchal prestige and elitist gatekeeping as does MDW’s fumbling of her transition into a lady of the manor. But alas, we don’t get any of that because Wheatley is more interested in making the novel’s subtext text, and leaning into the physical representations of a haunted manor. It’s the wrong choice. MDW’s nightmares of Rebecca, the visions of her still pacing through these grand halls or a grotesque version of her in the sea she loved so much, do nothing for the story. Every so often MDW sees huge, swooping flocks of birds that, what, suggest the confusion of her mind? Rust Cohle has got that on lock, thanks. “I don’t believe in ghosts,” MDW says, but Rebecca tries to have it both ways. The film doesn’t do enough to support either a true “Manderley is haunted, motherfuckers!” reading, nor does it summarily dismiss that idea and focus more on the human drama unfurling instead. Without either as a true motivation, and plagued by poor characterizations and a mostly subpar cast, this Rebecca isn’t worth your time.

← Why Quibi Was Destined to Fail | Review: Anne Hathaway Is Living Her Diva Fantasy In Robert Zemeckis's 'The Witches' →