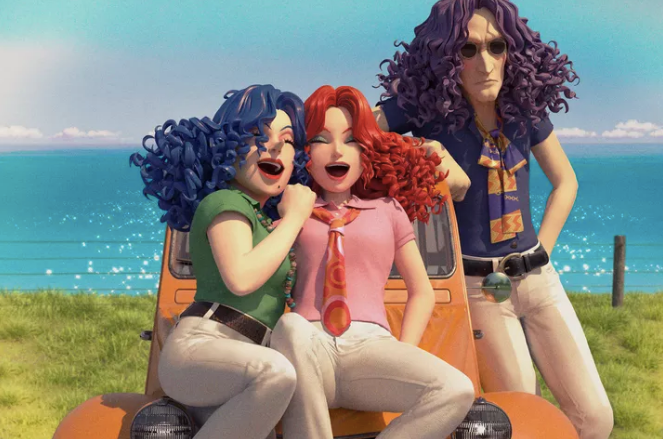 Now on HBO Max: 'Earwig and the Witch' Is The Latest From Studio Ghibli

Studio Ghibli has given us such wonders as My Neighbor Totoro, Spirited Away, Ponyo, and Howl’s Moving Castle. Though this world-renowned cartoon studio boasts films from a variety of esteemed animators, it’s viewed as the house that Hayao Miyazaki built. As such, we expect Studio Ghibli films to plunge into sensational adventures where the ordinary meets the extraordinary. Protagonists are often petulant children, who move with the chaotic energy and clumsiness of their real-life inspirations. Moments of bliss, wonder, and confusion are all honored with exquisite hand-drawn animation. Everything from falling leaves to a carefully prepared meal takes on a serene spectacle through the lens of such beautiful drawings. So, what does it mean when Studio Ghibli goes CG? Earwig and the Witch is here to show us.

Directed by Hayao’s son Gorô Miyazaki, Earwig and the Witch centers on a mischievous girl named Earwig (Taylor Henderson, in the English-language overdub), who was left on the footstep of an orphanage as an infant. All her redheaded mother left with her was a cassette tape and a letter promising to return once she’d defeated 12 vengence-seeking witches. Years will pass before Earwig learns about that. In the meantime, she’s become a master manipulator, convincing the orphans and matrons of her home to let her do whatever she wants. To keep this cushy situation of coddling and shepherd’s pie, Earwig must not get adopted. Crossing her eyes usually does the trick of scaring off would-be parents, but it fails to dissuade the blue-haired Bella Yaga (Vanessa Marshall) and her towering, purple-haired partner The Mandrake (Richard E. Grant).

Despite Earwig’s protestations, they take her in. Then, she’s told they are witches, demons are real, and she better do as she’s told or she’ll be cursed with big, wriggly worms! A child who has always favored scary stories over happy endings, Earwig is pleased beyond measure at the possibility of learning witchcraft. However, grinding rat bones, collecting nettles, and counting newt eyes is tiresome work. So, with the help of Bella’s familiar, a black cat called Thomas (Dan Stevens), Earwig begins to brew spells after hours.

In this witches’ house, Earwig finally listens to the tape, and learns her mother fronted a witch rock band, also named Earwig. (Cue a catchy Kacey Musgraves jam!) She also discovers that Bella and The Mandrake had ties to her mother. And at this point, you might think the plot will be more than Earwig griping, sneaking about, and mixing potions. You’d be wrong. Just as Earwig and the Witch seems ready to finally make proper use of its intriguing setup of witches, vengeance, and an MIA mom, the movie ends. It’s so jarring I wondered if I’d accidentally stumbled into a pilot episode of a TV series and not a movie. Nope! But hey, stay through the credits for storyboard sketches that serve as an epilogue. You’ll get more satisfying arcs than the actual animation offers.

The plot is barely there, feeling more like an extended second act than a fleshed-out film. Characters introduced in the first act, are referred to repeatedly as Earwig recollects about them. Yet, they play no role in the rest of the plot. Bella and The Mandrake begin as intimidating towers of alternative style and scowls, and are developed little beyond this. Bella bosses Earwig around and cowers in deference to The Mandrake, who is…her roommate? Husband? Master? It’s unclear even as their background is revealed. Meanwhile, The Mandrake has two modes: silent sulking and explosive tantrum. He is not a character as much as a curiosity, never satisfyingly explored. Even Earwig feels underdeveloped, defined chiefly by her impulsiveness and selfishness. She’s a pest who steals, lies, and gets what she wants all the same. No lessons are learned except how to best manipulate her new surroundings.

Most lamentable of all perhaps is the animation itself. This CG feels as if a Studio Ghibli movie was cheaply produced by a party balloon factory. Sure, Earwig and her crew are three-dimensional. But the lines and shapes that played well in hand-drawn animation feel flat and uninspired in CGI. Textures exists softly in clothing but are non-existent in hair and skin. It makes the characters look like plastic dolls. It’s not just jarring, it’s hard to look at. As if your eyes and brain are debating what exactly is going on here. Also lost is the physicality that made animated figures feel as if they had real weight as they pounced and gamboled about their fantastical worlds. Here instead motions are crude imitations of life, lacking their heft, resistance, and grace. Not even the sweet treats and savory meals look good!

Gorô Miyazaki walks unenviably in the long shadow of his father, a living legend of animation. Turning to computer animation was a bold move to stake fresh terrain in the Studio Ghibli dynasty, which was built and respected for celebrating hand-drawn even as Pixar pushed so many rivals to follow their lead. But Earwig and The Witch doesn’t make the case for such a conversion. From its whisper of a plot to its thinly sketched characters and joltingly ugly animation, it feels like a cheap knockoff of Studio Ghibli, even if it is the real thing.

Earwig and the Witch opens in select theaters on February 3 and hits HBO Max on February 5.

← Review: 'Little Fish' Is an Aching Romantic Drama with a Pandemic Twist That Hits Too Close to Home | Stanley Tucci Relays a Lovely Story About a Chance Encounter Between His Late Wife and His Current Wife →