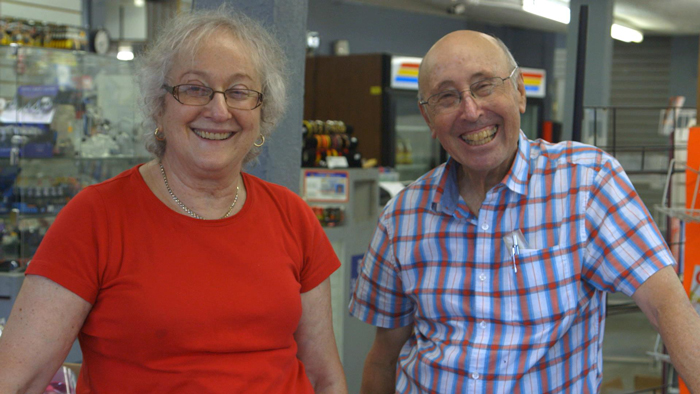 New To Netflix: 'Circus Of Books' Offers An Uplifting Story Of Family, Gay Activism, And Smut

In 1982, Karen and Barry Mason were a married couple with kids and need of a new business plan. She’d been a journalist, but got burnt out stories of murder, plane crashes, and government overreach into the sex lives of the American public. He’d worked in Hollywood as a special effects artist before moving into entrepreneurial inventions. Then, they saw an ad in the paper. Larry Flynt—of Hustler notoriety—needed distributors for his various magazines. The Masons were hustlers who didn’t blush at the bawdy, and soon they spun this connection into a brick and mortar operation: Circus of Books.

Talking head interviews give us the broad strokes of the story, while archival footage gives context to the lethal homophobia and anti-smut sentiments sweeping America. AIDS was being called GRID (Gay-Related Immune Deficiency), and the Reagan administration was ignoring that health crisis while cracking down on “obscenity,” meaning the distribution of porn. Meanwhile, gay men flocked to Circus of Books, where they had plenty of proof they were not alone. Testimonials reveal saucy anecdotes about the “Vaseline Alley” behind the shop as well as the importance of Karen and Barry’s totally chill attitude toward their merchandise and clientele. “They’re not offended. They’re not scandalized,” Alaska says of his former bosses, “It’s just their job.”

Karen likewise shrugs off the importance of their business. She repeatedly tells Rachel to put away her camera, wondering aloud what the documentarian could possibly do with footage of her old articles, mementos, or the couple cleaning out the storage room. “I think what we did was small human kindnesses,” Karen says, “in a very small way.” When they visit an archive, she points to a wall of subversive gay zines and tells Rachel that is what her documentary should be about, the publications that dare to offer the defiantly profane, even when it was illegal. That she and her husband did the same seems not impressive to Karen.

As the film goes on, Circus of Books reveals itself not only to be a jaunty history of its titular shop, but also a deeply personal tribute to the complicated and remarkable woman that is Karen Mason. From the start, her children and employees describe her as being “the one who wears the pants” in the Mason home. Rachel has a clear admiration for her strong-willed mother, following her despite the many on-camera micro-managings she attempts. However, the film also explores how Karen’s acceptance of gay culture and gay people didn’t always extend to her home life. In a tender section of the doc, the Masons remember when son Josh came out as gay. Karen didn’t take it well. Things were said that couldn’t be unsaid. However, Rachel speaks with her parents and brother to reveal the hurt that led to growth, reconciliation, and ultimately Karen and Barry finding pride in their work, their son, and their volunteering at PFLAG, a nonprofit organization that unites families, friends, and allies of the LGBTQA+ community.

Through all this, Circus of Books concludes as a journey of a movement and a family who grew within it. A sequence shot at a West Hollywood Pride Parade is contagious in its joy, and a balm for a soul aching. By including her mother’s nitpicking and being frank yet empathetic about their family’s darkest moments, Rachel Mason created a documentary that is deeply personal, unapologetically provocative, and wonderfully humane. If you’re thirsting for something saucy, funny, and heart-warming, you’ll love Circus of Books.

← Guillermo del Toro, Edgar Wright, Ava DuVernay And Other Famous Filmmakers Reveal What They've Been Watching | Spoilers: The Ending to Hulu's 'Little Fires Everywhere' Is Better Than the Book →