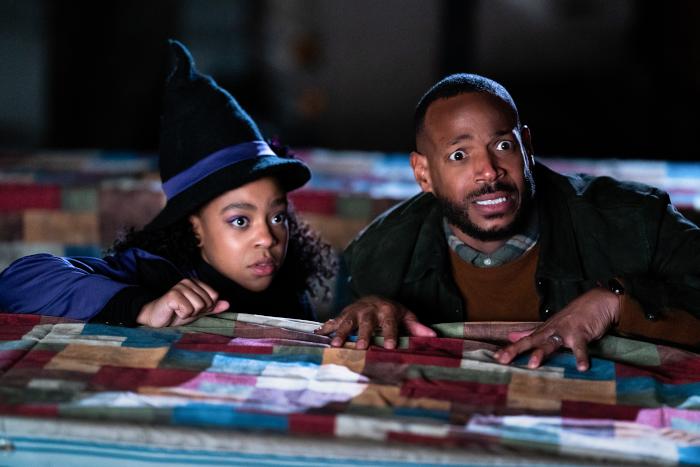 There’s a distinct line between horror movies and Halloween movies. Yeah, both tend to have witches and goblins and plumes of magic smoke, but Halloweentown and Halloween play very different games. For the season of falling leaves and carved gourds comes Netflix’s 2022 answer to the Halloween movie, The Curse of Bridge Hollow.

Sydney (Priah Ferguson, whom we already love from her turn in Stranger Things) didn’t want to leave Brooklyn, but it wasn’t up to her. Singing aloud to “Hit the Road Jack,” her happy family trots along and out of their city life to the charming small-town, Bridge Hollow. Bridge Hollow, as her dad (Marlon Wayans) insists, is one of the safest places in America and thus the perfect place for him to continue to be overprotective of his daughter.

Syd’s dad is a science teacher which means he thinks she should join the science club, ditch ballet for the more logical hobby of martial arts, and that he goes Neil deGrasse Tyson on all of our favorite Halloween monsters (as he insists, dead bodies don’t have functioning nervous systems, how could zombies attack?). While Sydney resents leaving the city behind, she’s enamored with Bridge Hollow’s zealous Halloween traditions and lore. After meeting the high school’s paranormal society, Sydney learns of Stingy Jack and how he was sent to hell by a mystic who once lived in her family’s new home. Should Stingy Jack return to earth on Halloween, he will have until midnight to swap a soul for his in hell and make it Halloween forever.

After accidentally lighting his jack-o-lantern (made from a turnip, which is a cute little historic detail), Sydney welcomes Jack back to the land of the living, who uses his dark magic to make the town’s Halloween decorations come to life. Working with her non-believer science dad, Syd and her friends have to work to locate and cast the spell that will banish Jack back to hell before he is able to capture a soul.

The Curse of Bridge Hollow is a sweet-as-candy-corn story about a father and daughter relationship that plays to how their differences make them the same. It suggests that the “science” vs “magic” divide, made wider by their ages and genders, is going to necessitate one learning to be more like the other, but its sweetness is in how they meet in the middle and learn that their ideologies can coexist. This is another of Netflix’s family-style Halloween flicks, coming off of 2020’s Hubie Halloween which plays some of the same notes, but a very different song. Hubie Halloween has a thick candy coating that tastes like classic Adam Sandler humor, where the in-jokes in The Curse of Bridge Hollow come much more from the idea that our horror comedy friend, Marlon Wayans, has become our horror comedy dad.

Just one gross-out gag and a lot of clowns are there to connect the dots between Scary Movie and this movie in a way that opens the door for multiple generations to have fun with this story. Along with that, there are references to horror giants, Ferguson’s character being named “Sydney” (feel old yet, etc.), and the magic of a flame first awakening three witches. It all makes for an appropriate gateway horror that parents should be comfortable sitting through.

The Curse of Bridge Hollow might not stand the tests of time such that highly anticipated reboots will be showing up on whatever replaces streaming services twenty years from now, but for those seeking some Halloween warmth or some family movies for the mild weather, it will answer the call.


← 'Walker: Independence' Starts Strong, But Doesn't Have the Legs | The Original 'Law & Order' Course Corrects with an Old-Fashioned Moral Dilemma →