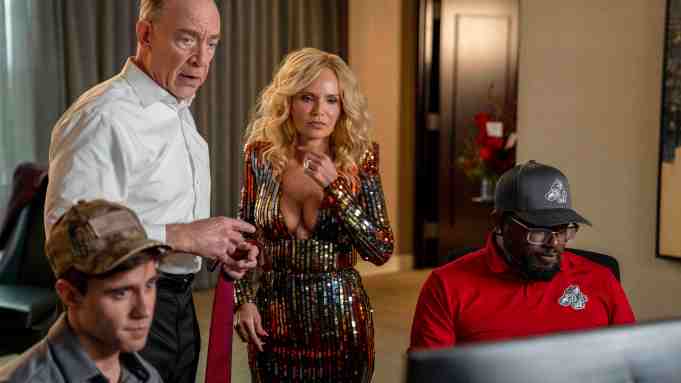 National Champions, which opens in theaters this weekend, is about the lead-up to an NCAA National Championship game, but there’s no actual football in the film, even if that might be the initial draw. Football is the Trojan horse here. National Champions is an issue-based film — and a decent one — disguised as a sports movie. It’s also based on a play, and it feels like it, as it is set almost entirely in hotel rooms and jumps from one speech to the next for the better part of two hours.

Playwright/screenwriter Adam Mervis (21 Bridges) and director Ric Roman Waugh (Angel Has Fallen, Greenland) have assembled a hell of a cast to deliver those speeches, too, including J.K. Simmons, Stephan James, and Uzo Aduba, the latter of whom manages to steal the whole goddamn movie with a monologue so blistering it singed my nose hairs.

National Champions is set in the days leading up to the college National Championship game. Stephan James (Homecoming, If Beale Street Could Talk) plays star quarterback LaMarcus James, who is poised to be the number one pick in the NFL draft and earn upwards of $35 million. The catch, however, is this: He and his best friend (and the team’s tight-end), Emmett Sunday (Alexander Ludwig) are threatening to sit out the National Championship game if the NCAA, among other demands, doesn’t start paying athletes and provide them with lifelong health insurance to cover injuries that may not completely manifest themselves until 20 or 30 years after their college days have ended. James moves from one hotel room to another in an attempt to talk players on both his team and the opposing team to strike ahead of the game.

Meanwhile, the NCAA and its executives, as well as Coach James Lazor (J. K. Simmons), are trying to convince James to drop his demands and play in the game, not only to salvage their $600 million paydays but the legacy of Coach Lazor, whose wife (Kristin Chenoweth) leaves him two days before the championship game for a professor played by Timothy Olyphant. As it turns out, that same professor — who specializes in labor disputes — is helping LaMarcus James and Emmett Sunday organize the strike.

Beyond that, National Champions is a series of speeches where each side uses various mouthpieces to advocate their position. The speeches often contain a lot of statistics, and sometimes they sound as if the actors are taking a break from the movie to read from talking points written by a college debate team or a Wikipedia entry. It makes for a fine, oftentimes thought-provoking film, even if all the arguments are fairly basic, but National Champions is the kind of film that could’ve greatly benefited from the likes of Aaron Sorkin, David Mamet, or Ta-Nehisi Coates, writers who can skillfully disguise arguments as anecdotes, who can forcefully make the same points without stacking their monologues with statistics and figures. The cast delivers the hell out of the material they are given — they put a lot of mustard in the bun, but National Champions has a six-inch hot dog for an eight-inch bun. There are moments where James or Simmons or Tim Blake Nelson, Lil Rel Howery, David Koechner, Jeffrey Donovan, or Uzo Aduba must use their considerable talents to paper over the lack of substance. If you love these actors enough that you think you’d enjoy watching them read from the phone book, there are moments in National Champions where that belief will get a good test run.

Ric Roman Waugh’s staging doesn’t help much, either. It’s generic, a series of conversations delivered in one hotel room after another. It’s the kind of movie that feels like it was shot under COVID-19 protocols, where characters take turns speaking instead of feeding off of one another. Moreover, the film uses several real-life sports anchors — Jemele Hill, Mike Greenberg, Steve Levy — and even Seahawks QB Russell Wilson (a producer on the film) to provide the movie with verisimilitude, but it mostly works in the opposite. They cheapen it.

For all its faults, however, National Champions is a well-intentioned film, and while LaMarcus James is undoubtedly the “hero,” arguments about student-athletes on all sides are well-considered. It’s a flawed, f**ked-up system, and student-athletes are essentially used as free labor to enrich executives, coaches, and leagues. The alternative — taking billions of dollars meant to provide scholarships for those in less lucrative sports in order to pay athletes in the more popular sports an actual salary — doesn’t sound all that fair, either, at least not until Bernie gets his way and college admission for everyone is free.