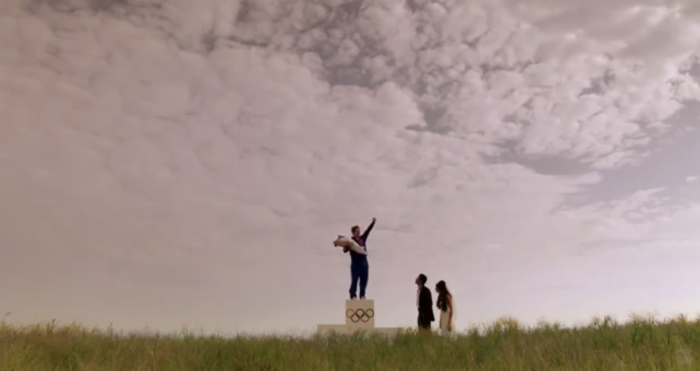 Eight years ago today Mike Birbiglia’s directorial debut Sleepwalk With Me was released in theaters. The film was based on his one-man show of the same name which also inspired a book he wrote, Sleepwalk With Me and Other Painfully True Stories. In the movie, Birbiglia (called Matt Pandamiglio) narrates a story about his breaking into standup comedy, moving in with and eventually splitting up with his girlfriend and jumping through a hotel window while asleep. It was exactly what I needed to see at that point in my life.

At the time of the film’s release, I had been doing stand-up in New York City for a little more than two years. I loved stand-up, but I knew deep down it was not a viable option for me. It was a means to an end but that end was not stand-up. More often than not I’d think “maybe if I tell enough jokes about Batman, someone will let me write Batman.” Watching Birbiglia’s journey through the film, learning to get more personal with his material and tell his story, traveling for miles and being paid very little to perform, it all accentuated how I felt. I would only consistently do stand-up for about two more months.

Sleepwalk With Me also shows Mike Birbiglia’s character move in with his girlfriend, Abbie, in an apartment in a Brooklyn. It’s at this time that he starts sleepwalking, whilst dreaming that there is a hovering jackal in their room. As the ideas of marriage and children start becoming more prevalent and it becomes clear that Mike isn’t ready, his bouts with sleepwalking and his dreams get worse and more dangerous. The sleepwalking, infidelity on Mike’s part and a half-hearted engagement, lead to he and his girlfriend breaking up and him moving out.

Before I stopped trying to be a comedian and before I saw Sleepwalk With Me in theaters, I had just spent four months living alone. I was in a small apartment in Brooklyn that I used to share with my girlfriend. She was the first person I had ever exclusively shared a place with (we’ve all had six roommates before, right?). We had known each other for a few years and were in love but… there were a lot of things we weren’t ready for.

For instance, our apartment had almost no furniture. Part of that was due to the fact that our first apartment ended up being infested with bedbugs (classic) and what little furniture we had we threw out. But after that, neither of us were responsible enough to save up and get more.

Our relationship only got worse. We had grown farther and farther apart despite living closer and closer together. She would spend more time with her friends than with me and I would get resentful. I wasn’t goal oriented enough with my stand-up, the day job I worked paid very little money that I didn’t save and she was, understandably, annoyed.

When she left, I was heartbroken and alone. I mean… I wasn’t completely alone. Most of her clothes were still in the apartment as we both searched for new places to live, but it was not the comfort I needed. I was sure that nothing like this had ever happened to anyone, ever and that I would not come out ok. My life as I knew it was over.

To top it all off, neither of us were mature enough to break the lease we’d signed two months prior. I insisted she do it, since she wanted the breakup. Again, not the most mature move, but to quote Sleepwalk With Me “Remember, you’re on my side.” I thought “She’ll change her mind and stay with me instead.” I was wrong.

Eventually the lease was broken and we went our separate ways. I would move in with two of my best friends, leaving Brooklyn for good. She moved in with one of her best friends. It was a new start for both of us, but there were certain things, certain feelings that I still held on to.

A month later I sat in a dark movie theater (Oy, do I miss that feeling). I watched as Matt Pandamiglio told the story of his former relationship. While events didn’t play out on my end exactly as they did in the movie (I’m not a sleepwalker, there was no infidelity that I’m aware of) I still felt a great sense of understanding. Here was a stand-up comedian, living in Brooklyn, moving in with someone for the first time and it didn’t go well.

The best part? Mike was OK. Not just OK, he was thriving. And so was his ex. They had both moved on. After seeing the movie, I was able to do the same. I was able to let my feelings go.

Now, I’m a writer (not Batman, but still) and I’m happily married. I’m more responsible. I’ve grown. I’ve healed. That all started because a comedian had decided to tell his story. How he went through something bad but pushed forward. His life wasn’t over and, when I finished watching the film, I realized mine wasn’t either.

← The New York AG's Office Subpoenas Eric Trump in Suit Against Trump Organization | The Fantasy of Jennifer Garner and Bradley Cooper Is Real, Even if the Alleged Romance Isn't →