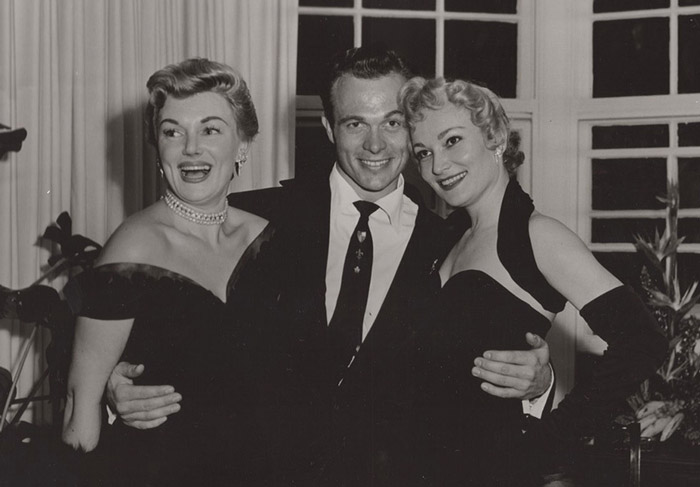 Netflix has unleashed Ryan Murphy’s latest, Hollywood, a mini-series that blends fact and fiction to tell torrid tales of broken dreams, closeted desires, bold ambitions, and scandalous sex. Among the more outrageous real-life inspirations that the new show has to offer is that of Scotty Bowers, the controversial “pimp to the stars.”

In Hollywood, Golden Tip Gasoline isn’t just a place to fill your tank, but also a place where the stars can fuel their engines. “Some of my customers don’t just come here for gas,” proprietor Ernie (Dylan McDermott) says with a winking tone. “Sometimes you have to service.”

Full Service was the winking title of Bowers’ explosive memoir. Published in 2012, it laid out the tale of his life, which was littered with namedropping as well as a slew of posthumous outings of beloved Hollywood icons.

Sure, you may know that Rock Hudson was closeted and that Cary Grant and Randolph Scott’s long-running romance was an open secret in showbiz. But Bowers claims before he was big, Hudson waat his gas station, tricking to johns, Grant included. Plus, many were shocked when Bowers outed Spencer Tracy and Katharine Hepburn, threatening the illusion that the iconic power couple was one of Hollywood’s greatest love stories. Instead, Bowers said Tracy and he hooked up repeatedly, while he arranged for a long line of ladies to meet Hepburn in her private bungalow.

Aided by a rotating cast of game sex workers, Bowers ran a full-service operation out of that gas station, that boasted a two-bedroom trailer in the back, a deal with the hotel across the street, a bathroom for quick hook-ups, and even a peephole for voyeurs. As he put it in the 2017 documentary Scotty and the Secret History of Hollywood, “That’s what you call business, baby!”

There was a predictable backlash once his book came out. When Full Service was discussed on The View, the hostesses decried Bowers and his claims. Who was he to tell such tales when the dead couldn’t refute them? Even if they are true, what gives him the right to out the dead? And think of their families!

Clips of this segment are shown in the doc, as is a confrontation with a man at a bookstore who challenges Bowers, saying he has no right to reveal the personal lives of closeted gay stars. “What’s wrong with being gay?” Bowers counters with a jovial smile.

William Mann, the acclaimed author of the incredible non-fiction book Behind the Screen: How Gays and Lesbians Shaped Hollywood, 1910-1969 gives credence to Bowers claims, by appearing in Scotty and the Secret History of Hollywood. Not only does he agree with some of Bowers’ takes on the sexual orientation of several stars, but also Mann provides context to the Hollywood scene that was a hotbed for passion and exploration.

He explains how the Hays Code shut down the party, introducing “morals clauses” to talent contracts that demanded the stars present a shiny image to the public. The vice squad in Los Angeles was on the hunt for queer people, barging into gay bars to arrest the flamboyant. Getting caught in such a place would kill your career, and that’s not the worst of it. Some were institutionalized, chemically castrated, and lobotomized.

In this environment, Bowers offered a safe space for stars to explore their sexual desires without judgment or risk of exposure or imprisonment. Through this lens, he is viewed by some—including entertainment journalist Peter Bart—as an essential source to a side of Hollywood the studios’ marketing team kept doggedly hidden. Essentially, Bowers was shining a light on the truth of Golden Age Hollywood.

Bowers’ alleged revelations also give LGQBTQA+ people a greater insight into our own history. Through his accounts, the previously closeted can be claimed in our community, and we can see ourselves more clearly in the history of American pop culture.

With a roguish smile and an easy charm, it’s easy to see why so many have trusted Bowers with their bodies, careers, and stories. However, he too was a complicated person with troubling flaws.

Bowers would shrug off the label as a “queer icon” because he didn’t consider himself gay or straight or any other LGBTQA+ label. In the doc, he gleefully proclaims, “I’m everything!” He does mean everything. Bowers brags about being the only subject that pioneering sexologist Alfred Kinsey ever interviewed who could answer questions on every sexual act, including bestiality. Then comes a part of the doc that gets deeply troubling, even though Bowers doesn’t realize it.

Trigger warning for those sensitive to descriptions of sexual abuse against minors.

When recounting his boyhood, Bowers recalls his first sexual encounter, when a grown male neighbor performed oral sex on him. Documentarian Matt Tyrnauer notes that today that would be viewed as sexual abuse, which Bowers rejects. “There’s nothing wrong with that, baby,” he says, adding, “There’s no such thing as someone ruining your life when they suck your c*ck.”

Bowers then doubles down explaining how he began “tricking” as a boy when he realized the local priest was eying him up. He tells of how a network of priests had sexual contact with him, paying him with coins they took out of the collection baskets. To Bowers, it’s a funny story of a young hustler always on the make. However, Tyrnauer recognizes the horror of this revelation, cutting to images of Bowers as a small child to underline its gravity. He does not ask if Bowers has engaged in pedophilic acts as an adult.

Scotty and the Secret History of Hollywood followed Bowers through his 90th and 91st birthdays, recounting his past and present with an equal measure of shock and awe. When he passed on October 13, 2019, THR reached out to Tyrnauer for comment. The documentarian responded with tribute and defensiveness, clearly aware that there are many who remain dubious of Bowers’ claims.

“His story, which he waited to tell until he was in his late 80s — and for years refused to tell at all — forms an astonishing counter-narrative of Hollywood and exposes the mores of the movie capital in a time when gay men and women were forced to be sexual outlaws and were publicly shunned and often persecuted, or at least forced to live double lives. Scotty was a central figure in the gay underground of Hollywood and served as a trusted protector of his friends and associates lives when they had no alternative but to live in the shadows.”

Hollywood is now on Netflix. Scotty and the Secret History of Hollywood can be rented on Prime Video.