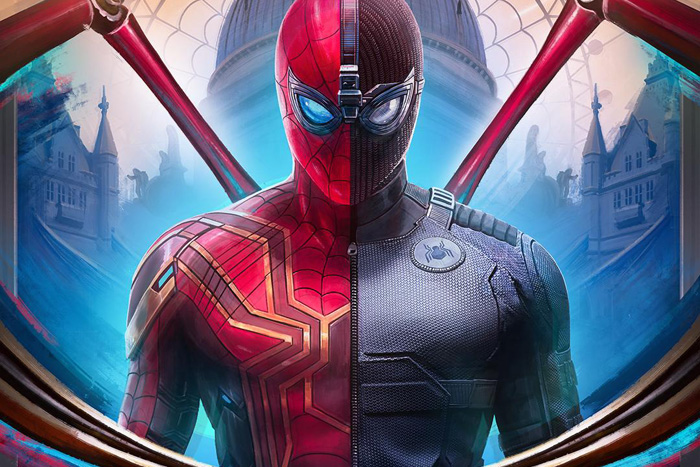 It’s been almost two weeks since the news broke that Marvel and Sony will stop sharing Spider-Man after talks between the studios broke down, but fans are nowhere near ready to let the issue go, even after both Tom Holland and Kevin Feige gave interviews at D23 that made it sound a helluva lot like this divorce is happening. It also doesn’t help that in the midst of this debacle, Sony is taking a page from the Avengers: Endgame playbook and re-releasing an extended cut of Spider-Man: Far From Home in theaters. To be frank, this is a bullshit practice no matter which studio is doing it, and it’s especially dickish considering the whopping four minutes of extra footage in Far From Home is a scene that was originally shown in trailers for the initial release. I know this because my son was especially pumped for it because he loves the Iron Spider suit, so forgive me if I’m extra salty, Sony, you butts.

Anyway, in an extremely brilliant move, the Sony Spider-Man account tweeted a promo for the extended cut on the same exact day as the news of the Marvel split. It did not go well! In fact, it went so badly that the account literally went radio silent until yesterday when Sony had no choice but to tweet the now-very awkward film they were re-releasing in theaters. While I’m normally leery of entitled commenters asking for the internet’s manager, I’m also a messy bitch who loves drama. Especially when that drama involves fans punching a major movie studio in the spider-balls for its shameless cash-grab.

oh so ur back from the dead

It went downhill from there.

Why should I deal with that cliffhanger ending again when it won’t be resolved? Tell the greedy fucks at Sony & Disney to get their shit together, then I’ll consider it!

Will this fan backlash ultimately mean anything? Probably not. And it’s going to be really hard to gauge whether this Marvel/Sony debacle impacts the box-office for Far From Home’s re-release because even Endgame’s extended cut barely made a blip in theaters. In fact, box-office for Endgame’s recut was so negligible that I’m amazed Sony even bothered to pull a similar trick, but that’s exactly the kind of decision-making that Spidey fans are afraid of going forward.

As much as I hate to embolden fan entitlement, these angry nerds do have a very good point. Why the hell would anyone pay money to see a movie whose events now mean jackshit? For Christ’s sake, Jake Gyllenhaal’s Mysterio was directly tied to Tony Stark and the aftermath of Endgame. So now everything Mysterio did has to be either fully ignored or danced around very carefully on top of pretending that Tom Holland’s Spider-Man isn’t basically Iron Man Jr, which is a whole other shit-show.

And yet here’s Sony charging people the full price of a theater ticket just to watch one scene — that, again, was already promised to audiences the first time — in a movie that will very likely be retconned. Gonna have to say bite me one million on that one.

← Perspective: On 'Blinded by the Light' and Being the Only Brown Face in the Room | Stream It or Nah: Pretty People Play With Puns in Netflix's 'Falling Inn Love' →