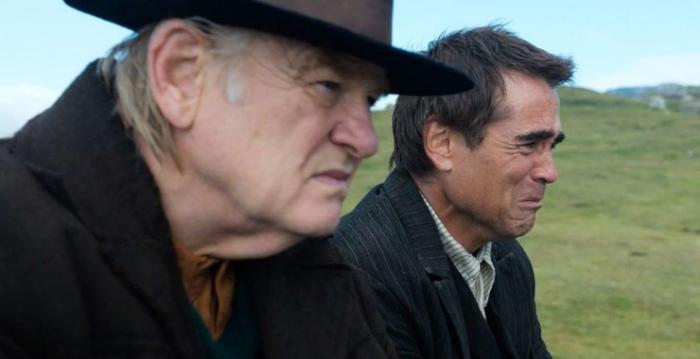 'The Banshees of Inisherin' is a Quiet, Simple Story of a Tall Handsome Man in a Dusty Black Coat with a Red Left Hand

There was no shortage of hype for The Banshees of Inisherin, it having nabbed the Golden Lion at the Venice Film Festival. Martin McDonagh has returned to this festival run after his accolade covered Three Billboards Outside Ebbing, Missouri with another film, this time a more subdued one that’s drenched in his signature bleak comedy.

Best friends Pádraic (Colin Farrell) and Colm (Brendan Gleeson) are at an impasse. Pádraic wants to continue meandering through his simple life, his best pal by his side at the brew pub, and Colm wants none of it. Surprising Pádraic on an otherwise normal day, Colm declines his invitation to join him for a pint, because “I just don’t like you no more.” Gutted, and unwilling to believe that his best chum has done such an about-face, Pádraic pursues his former pal while Colm escalates in his insistence that their relationship is over. The quiet town, an island off Ireland proper, is shaken at the idea that the two are no longer an item and the residents react to the change in the status quo, one that manifests as an existential crisis for Colm and a world-shaking end for Pádraic.

Martin McDonagh’s history as a playwright is palpable in his stories. His work is often born of a simple premise and tells slice-of-life tales of flawed people in ways that portray them without judgment or moral. For In Bruges, his first feature and previous work with these two actors, McDonagh follows two hitmen in the face of an inexcusable act, steps back and watches them react to it. It’s in these moments where he’s at his strongest.

In many ways, The Banshees of Inisherin is a spiritual successor to In Bruges, slotting the two actors back into the roles of the dimwitted short-sighted young man and the wise older one that’s inadvertently torturing him. Instead of the simple story taking place in Bruges, this time, it’s in the fictional Inisherin where Pádraic is slowly torn apart by the demise of a non-romantic relationship. Like his romantic view of Bruges, McDonagh seems infatuated by Ireland itself, with wide shots of sprawling green set to the sound of fiddles and chanting pub patrons. In telling the tale, McDonagh starts with the audience sympathizing with Pádraic as he spirals in the face Colm ruthlessly ripping the rug out from under him in a selfish act disguised as a personal decision. But as the story treads on, Colm’s own reasons come to light in ways that ask the audience to absorb the plight of the existential crisis of a tortured artist. Again, not once asking us to choose a side, McDonagh plainly portrays a human reaction to an inciting incident.

McDonagh’s playwright sensibilities are also present in his use of the allegory of a civil war playing alongside the breakup of these two men, and also in his use of Shakespearean frills like an old lady soothsayer with visions of death. These touches make it feel like a fable. To bulk up his story, he’s added further beats and moments to highlight the richer setting and to paint a more detailed picture of Colm and his hometown. While I hesitate to ever suggest what “I would have liked to see,” I do concede that it sometimes feels as though the simple tale was padded in unwelcome ways, and might have been best as a thirty-minute stage play simply about the dissolution of a friendship. Resisting the urge to let Siobhan (Kerry Condon) be rendered nothing but a sounding board for Pádraic, she’s given her own story but it unfortunately sometimes feels like filler more than fodder.

Like its predecessors, The Banshees of Inisherin is snappy and quick. McDonagh’s dialogue comes with a built-in rhythm, and his actors are experts at dancing to it. Farrell specifically shines in his ability to use his eyebrows, his shrugs, and his toggles between sing-songy tones and whispers to keep the dance of the dialogue going. Barry Keoghan as Dominic is a worthy addition to the canon, playfully delivering his lines in ways screaming to be included in trailers. While not as riotously funny as his other works, this quieter and more subdued story still comes with laughs, and also tears born of both pain and catharsis. Farrell and Gleeson expertly use their subtle expressions to portray despair, quiet rage, and perplexed longing all through repeated instances of giving and declining invitations for a pint.

Friend breakups were covered in Time in 2018 and became a hot topic in 2022 when so many of us watched platonic relationships dissolve in the pandemic. Media often tells stories about the dissolution of romantic relationships, but rarely do we tackle the gut-wrenching pain that comes from ending it with a friend. McDonagh’s The Banshees of Inisherin isn’t subverting romantic comedy tropes; it’s tackling relationships from a different angle using his unique approach to stories that just throws a devastating moment into his characters’ realities and then wonders what they might do.


← Review: Eddie Redmayne Kills in 'The Good Nurse,' a Solid Thriller with Thin Ambitions | Review: Cate Blanchett Is Maestra Of Us All In The Career-Defining 'Tár' →