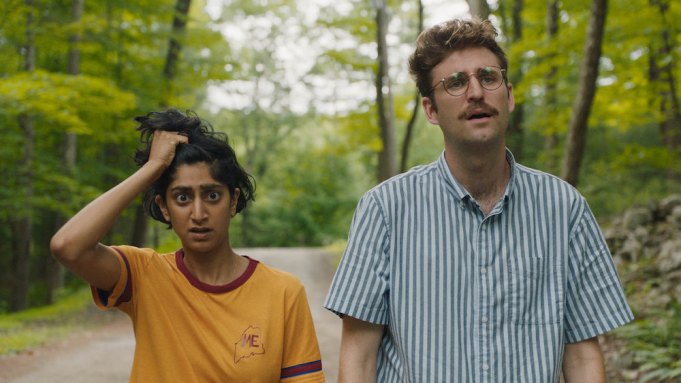 Love and Isolation Double Feature: 'The One I Love' and 'Save Yourselves!'

(mild spoilers for The One I Love and Save Yourselves! ahead)

There’s several types of isolation. The one that’s often the most feared, and the subject of countless films, is total isolation. The super dramatized version of this is surviving a small plane crash on the side of a mountain or a boat capsizing near a deserted island. There’s also the quieter, but just as unsettling, social isolation, when one may be surrounded by all the comforts of home yet deprived of outside contact. And then there’s the isolation that falls in the middle, when it’s you and another person facing isolation together. A situation that offers many narrative possibilities is a duo, with one of the more common ones being the romantic pairing. It’s fascinating to watch two people who are close to one another be forced to overcome obstacles, especially when there’s the possibility for the situation to devolve into one in which the individuals find themselves in opposition. Even when the individuals have the same goal, such as mutual survival, the likelihood of the two disagreeing on how to accomplish that goal is high. We see this play out in the deeply imaginative and thoughtful independent movies The One I Love and Save Yourselves!.

The framing of the two films mirror one another pretty closely: Both feature couples who decide to ‘get away from it all’ in an attempt to revive their relationships. Soon after arriving at their location, things quickly turn odd and the couple has to find a way out of it and, in the process, confront who they are both as individuals and as a unit. Put in these terms, the films sound pretty much the same, but the stories take their own compelling routes and ultimately wind up in very different places.

In 2020’s Save Yourselves!, Su (Sunita Mani) and Jack (John Reynolds) are the sort of New York yuppies who long for the same sense of earthy and free-spirited individuality that everyone else in their social group seem to have. They are generally happy with one another, though they’ve clearly settled into the well-worn sweatshirt of coupledom, embodying our tech-addicted world by being more distracted by their phones than the potential of actual physical intimacy with one another. Realizing that they’ve found themselves in a rut, they jump at the chance to “disconnect” and take a solitary week at a friend’s family cabin in upstate New York, swearing off any phones or internet over that time. This, of course, presents an amusing set up for being caught utterly unaware by a hostile alien invasion spreading across the globe.

The couple in 2014’s The One I Love are also trying to reconnect, though their situation is a little more fraught, as Sophie (Elisabeth Moss) and Ethan’s (Mark Duplass) marriage is on the rocks. They’ve clearly grown apart over the years (it’s easy to imagine them as Su and Jack five years earlier), with Ethan constantly seeking harbor in prickly defensiveness as Sophie’s resentment grows increasingly more obvious. Their eccentric therapist (Ted Danson) advises them to spend a long weekend at a secluded getaway home designed for couples where the two of them can right the course of their marriage. Things take an alarming shift when the two discover that inside the guesthouse on the same property, there are two separate versions of Ethan and Sophie. They’re alike in every way, except the copies that reside in the guesthouse are sweeter, more attentive (disconcertingly so), and when the real Ethan and Sophie interact with the other’s imposter on an individual basis, things get…complicated.

In both films, solitude is the perceived solution, but in practice, it threatens to undo them. But while Su and Jack are cut off from the world and attempt to get back to it in order to locate shelter and possibly some answers, Sophie and Ethan are quite capable of rejoining the world as they knew it. But when presented with the opportunity to put this strange incident behind them, the desire to know more brings the two back to the house, where the situation escalates before reaching its enigmatic conclusion. Despite the plot similarities, the two films have very different flavors: Save Yourselves! takes a couple’s retreat and turns it into a wry alien invasion story that pokes fun at our hand-wringing over technology, while The One I Love is an unsettling doppelgänger tale straight out of The Twilight Zone (a reference used within the film itself). However, both strike many similar beats, including the fact that it is the women in these stories, Su and Sophie, who take control of their situations. Sophie’s curiosity is the driving force in her push to uncover the house’s secrets—though it’s obvious, if not to her than to the viewer, that there are ulterior motivations—to figure out the purpose and meaning behind it all. Meanwhile, Su finds herself having to be the brains of the operation and determine the best means of survival as Jack threatens to fall apart, a challenge in and of itself, as neither of them possess much in the way of survival skills (I’m putting this lightly; I’m a total house cat and even I found myself yelling at them multiple times).

Ultimately, the most notable difference between the two scenarios is the trajectory that the couples go in, as one couple find themselves brought closer together (even if their ultimate fate is left quite vague) while the other has to sort out the wedge driven between them. An interesting commonality is seeing how much of the tension in either film comes from how the men want to embrace inaction when it comes to their relationships. Jack is perfectly satisfied with his life as is, content to simply talk about other plans while maintaining life in stasis. Ethan, on the other hand, wants to avoid any challenges whatsoever. He’s at a loss when it comes to picking up on Sophie’s emotional cues and when he does try to respond, it rarely, if ever, helps. He has no desire whatsoever to uncover any deeper meaning to the doppelgänger situation, which is emblematic of his lack of desire to figure out what’s at the source of his and Sophie’s problems in the first place. However, the place where these two men deviate from one another lies within their actions. For all of his middling cowardice, Jack, quite unexpectedly, is able to summon up his sense of courage when things appear to be at their worst. Ethan, however, consistently falters when it comes to showing the love he has for Sophie and when he finally gives the Big Speech, it speaks volumes about the film’s finale.

In the same vein that many of us enjoy watching couples come together, there’s something enjoyable about watching them problem-solve while witnessing the radical change they undergo (which is practically a necessity to tell a successful story) and see how it changes the course of their relationship. Sometimes things end, and sometimes bonds are strengthened. By being alone with just them and their issues, the couple dynamic either exposes people or compels them to hide who they are. Someone surviving an ordeal tends to present quite differently than someone who goes into it with another person by their side, and the relationship between them (i.e. an established romantic relationship vs lone survivors happening upon one another) impacts the narrative tremendously. Love is grand but the big question that invariably arises is it sustainable in the face of tremendous difficulty? That answer is explored here in these two films, but, much like their open-ended finales, there’s no easy answers to be had, and is truly subject to your interpretation.

Save Yourselves! is currently streaming on Hulu, and The One I Love is available on Netflix.

Kaleena Rivera is a tv and film writer. You can find her dodging aliens and not swearing off of technology on Twitter here.


← Twitter Users Respond to the Prompt: 'Report Major News Like the BBC' | 'A Discovery of Witches' Season 2 Review: The Rules Of Time Travel Are Simple And Finite ... →