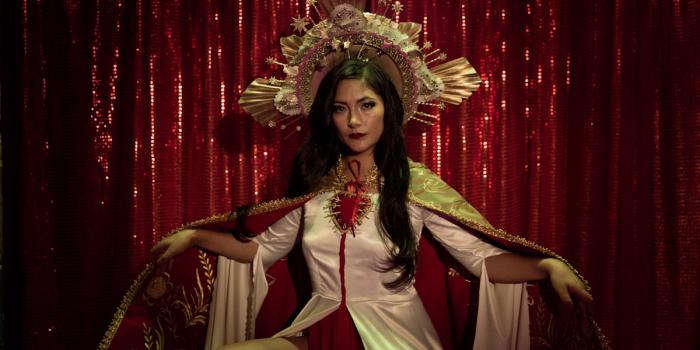 Lina is a Peruvian woman who moved to Chile to find work as a housekeeper to a wealthy family. Her plan was simple and familiar: Get a job, live frugally, and send the rest of the money back to Lima so that her son Junior can have a good life. That was a decade ago, and in the interim period, Junior has grown into a distant adolescent who barely seems to acknowledge his mother’s existence (unless it’s to ask about gifts she sends him). Now, she’s preparing to return home for Christmas once more, but before that, she has work to do and a little time to reinvent herself.

The directorial debut of Maria Paz Gonzalez, Lina From Lima treads a lot of familiar ground in terms of narratives centered on immigrants in futile search of a better life. What makes this one unique is its musical elements. Yes, this is a full-blown musical, complete with sequins and vaguely choreographed dance numbers! As Lina finds herself dealing with family strife, personal doubt, and the threat of financial ruin, she escapes into music, like a modern pop diva or retro cabaret singer. These numbers are the obvious highlight of the entire movie.

Fittingly for a woman who is dishearteningly used to living with little money, even her fantasies are on the cheap side. Her costumes are basic, with the clear handmade touch to them, the dance moves are so-so, and even a dramatic moment involving a diving pool looks scraped together with cheap effects. The kitsch qualities work in its favor, helping you imagine a situation where Lina puts up the sparkly curtains herself for an impromptu performance. There is still immense joy and emotional release to be found through making the most with what you’ve got, even if it’s only an exhausted mind.

Anchoring this story is Peruvian actress Magaly Solier as Lina, a no-nonsense housekeeper who is nonetheless overburdened by a decade of struggles and emotions. You can feel the increasing weight on her shoulders as she realizes how much her old life has dissipated since she left Lima. Her son has grown up without her, her ex-husband has remarried and had another child without her knowledge, and the things that used to feel so familiar are now the stuff of strangers. Meanwhile, in Chile, she has friends but little of a life outside her work. Solier is a suitably strong singer for the part but also possesses a relatable warmth with a sensual edge that makes her perfect for portraying a woman in possession of much emotional baggage in serious want of release.

As much as the film is a narrative of the immigrant struggle, Lina From Lima is at its most interesting and appealing when it focuses more on its heroine’s realization of her own potential for liberation. As she finds herself further detached from her family and old life in her homeland, Lina takes solace in her employer’s family, but particularly the young daughter whose distant relations with her own parents mirror Lina’s. Both parents try to assuage their guilt over familial neglect by flinging money and presents at the problem: Lina overspends on a football shirt Junior has demanded while her employer spends a fortune building a backyard pool for the daughter he believes to be a world-class swimmer in the making (something he would quickly see was not the case if he spent any time with her.) She also claims a sliver of freedom through sexual hook-ups, usually taking place on her employer’s plastic-wrapped furniture, and the sorts of nights out single mothers are seldom able to enjoy.

The contrast between the grit of realist drama and the ‘let’s put on a show in the old barn’ style musical fantasies proves remarkably effective in conveying this divide in Lina’s life. To escape the drudgery of domesticity, Lina retreats into an encouraging and decidedly feminine world, one rooted in classic Hollywood musicals, cheap nightclub acts, and Catholic iconography. The short running length gives the overall arc a slightness that could have used some more breathing room, although it is a relief that Lina From Lima never gives in to the urge to descend into cheaply earned melodrama in an attempt to push along the story. Still, these musical numbers cannot help but leave you wanting more. There is certainly room and plentiful opportunity for the narrative to offer a greater commitment to its unique central concept. This may be an inevitable side-effect of a production with such a small budget, but given how delightfully inventive so much of the movie is, it remains a disappointment that it limited itself so much in this regard.

Lina From Lima shines most when it wholeheartedly embraces its femininity, both in terms of style and theme. This isn’t just a tale of a woman getting her groove back, although that is certainly present here. What Gonzalez and Solier are most intrigued by is the ceaseless pull between responsibility and desire, and how the smothering limitations put upon women to be everything to everyone leave inevitably leave them desiring so much more. I was left wanting more, but remained fulfilled by that Lina From Lima had to offer, and despite its seemingly esoteric concept, it’s an accessible narrative that many of us could benefit from engaging with.