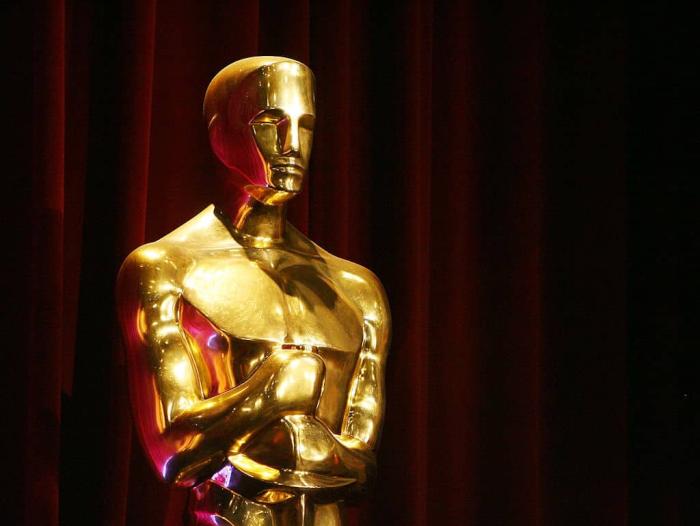 Let’s Talk About the Tackiest Oscar Campaign of All Time

The Oscar nominations will be announced this month and I am already preparing myself for a mountain of disappointment. This is my annual tradition: spend way too much time caring about this rigmarole, get invested in the hopeless belief that the Academy will be different this year, then groan endlessly when the same assembly line of middlebrow meh-ness sweeps the board. I don’t do sports, friends, this is all I have. But there is one part of this nonsense I love: the campaigning. The high-low stakes of various multi-millionaires revealing their full thirst, schmoozing as if their lives depend on it, all to win a small gold man to stick on top of their toilet cistern. It’s great. I love the obvious hunger for respect, the industry hoop-jumping, and the ways that all of this desperation is commodified by an industry that spends all year waiting for this moment.

I want to hear all the drama. Oh, you spend 18 months in character as a bin-man for the role? You didn’t wash that entire time and you wouldn’t even let your wife refer to you by your real name so you could stay in character? I am EATING that sh*t up. We’ve already gotten our fair share of self-flagellation in the name of ART this season. Lady Gaga has unleashed her inner Daniel Day-Lewis, if DDL ever wore seven-inch heels and tried to solve the mysteries of the January 6 insurrection. Benedict Cumberbatch admitted that he gave himself tobacco poisoning multiple times for The Power of the Dog and learned new skills as exciting as castrating bulls and not showering for long periods. Is it exhausting? Yes. Are these acts of self-aggrandizing frequently empowering flawed and occasionally damaging narratives about how acting should equal genuine suffering? Of course. Do I hate it as much as I love it? Look, I don’t have many hobbies, OK? It’s this or crochet.

With the campaigning about to go into hyperdrive, I’ve been thinking a lot about those particularly messy or misjudged Oscar campaigns. It happens every single bloody time we get a cis man playing a trans woman, with all that talk of ‘bravery’ and how hard it was to walk in heels. I’m still salty over the Weinstein Company trying to leverage Alan Turing’s legacy to secure Oscar wins for The Imitation Game, a movie that didn’t exactly do its subject’s life justice. Honestly, I could probably write an entire article on how convicted rapist Harvey Weinstein redefined the Oscars through his tasteless bully tactics in the For Your Consideration field. For now, however, I have a more old-school story to share. Imagine running an Oscar campaign so tacky that John Wayne and Groucho Marx have to call you out.

It’s 1960 and John Wayne has released his long-time passion project The Alamo. Directed, produced, starring and co-written by the man himself, the movie is an epic historical war drama about the 1836 Battle of the Alamo. The budget is extremely high, with Wayne taking out second mortgages on his homes and using his own cars as collateral to put up an extra $1.5 million of his own money. A total of 560,000 feet of film was produced for 566 scenes. Of course, it’s not especially historically accurate, with the movie being more a reflection of Wayne’s own politics. But he’s a big enough star to make the film a box office hit, even if its huge cost meant it didn’t make its money back upon release. The movie was Wayne’s baby and he wanted it to get the industry acclaim he felt he was owed.

So, of course, he lobbied hard for Oscar recognition. It worked. The Alamo received seven Academy Award nominations, including one for Best Picture. You know what wasn’t nominated for Best Picture that year? Psycho. The rest of the nominations for the movie were tech-related, except for one: Best Supporting Actor for a man named Chill Wills.

Theodore Childress “Chill” Wills was a long-time actor and singer who was best known to many for being the voice of Francis the Talking Mule. He did comedy and drama and worked consistently from the ’30s onward, a consummate supporting player. A friend of Wayne’s, the pair had worked together before in Rio Grande, which led to a part in The Alamo as the ‘colorful Tennessean’ Beekeeper, one of Davy Crockett’s band of adventurers. It’s a classic scene-stealing supporting role, the character who brings some laughs to proceedings. Clearly, he knew that this film was his moment and that this Oscar nomination was his only chance to take home gold. So, Mr. Wills hired a publicity agent, as was normal, and decided to get to work securing his win.

It did not go well.

Wills hired W.S. ‘Bow-Wow’ Wojciechowicz to run an ad campaign in pursuit of the almighty Oscar. He was a veteran of the field and knew what mattered in races like this. His client didn’t have the name recognition of his co-star John Wayne or that narrative of being a long-overdue industry darling due their moment in the spotlight. His competition was also tough, with the Best Supporting Actor category including Sal Mineo, Peter Ustinov, Peter Falk, and Jack Kruschen. Add to that the growing sense that The Alamo didn’t really deserve to be nominated at all and Wills was dealing with an uphill climb. So, our old pal Bow-Wow decided to latch onto what he felt was the most poignant part of the story: the Alamo itself.

Once again, it did not go well.

One of the For Your Consideration ads run in the trades included name of every academy member alphabetically with a picture of Wills that read, ‘Win, lose or draw, you’re all my cousins and I love you all.’ Tacky, sure, but not quite egregious. It was aiming for that magnanimous air, as if Wills knew he would lose but wanted to show how grateful he was to be nominated at all. Most people just laughed. Groucho Marx took out his own ad which read, ‘Dear Mr. Chill Wills: I am delighted to be your cousin but I voted for Sal Mineo.’ 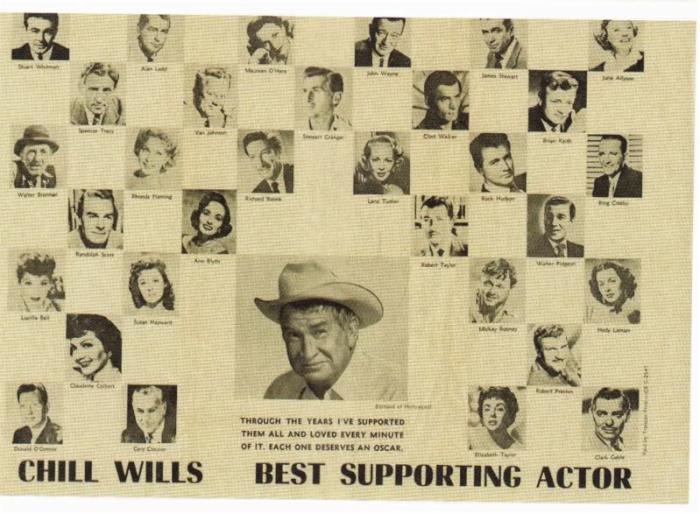 So, Bow-Wow went HARD with his new ad, which ironically ran in the same issue of The Hollywood Reporter as Marx’s. This new ad featured a photo of the cast of The Alamo with a picture of Wills in costume superimposed over them. The copy read, ‘We of the ‘Alamo’ cast are praying harder — than the real Texans prayed for their lives in the Alamo — for Chill Wills to win the Oscar as best supporting actor. Cousin Chill’s acting was great. Your Alamo cousins.’ 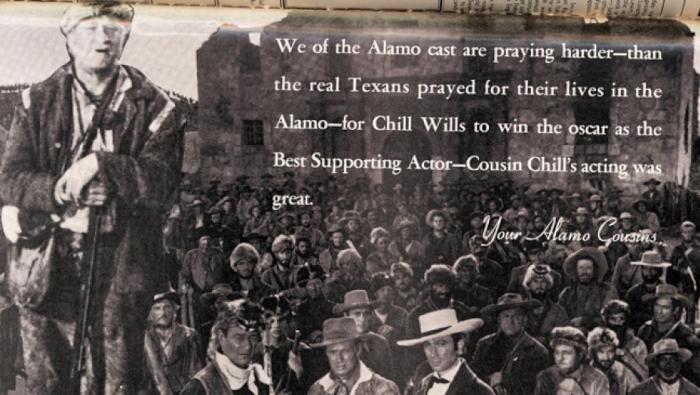 This was so gross that Variety refused to run it. The industry revolted, declaring that Wills had gone too far. Sucking up to your colleagues is one thing, but invoking a historic event with a very high death count to big up your cred is a level of shameless that even Hollywood groans at. It was also embarrassing as all hell for the film, particularly for John Wayne. He took out his own ad with a letter strongly rebuking his colleague: ‘No one in the Batjac [his production company] or in the Russell Birdwell office [his publicist] had been a party to his trade paper advertising. I refrain from using stronger language because I am sure his intentions are not as bad as his taste.’ Of course, Wayne’s own hunger for Oscar glory wasn’t mentioned here.

Bow-Wow later acknowledged that Wills didn’t know about the ad and apologized to his client for running it, but the damage was done. Wills fired him and went on the offensive in the press to condemn him for soiling his reputation. He lost the Oscar to Peter Ustinov while The Alamo took home only one award from seven nominations. Best Picture went to The Apartment and rightly so. Wills kept working and made another film with Wayne, so clearly there were no grudges.

After this mess, it became less common for actors to control their own campaigns for awards consideration. Nowadays, it’s all handled by studios and their well-paid teams of publicists who spend many months laying the groundwork long before audiences see the films themselves. Every now and then we get exceptions, such as Melissa Leo’s gaudy-glam ‘Consider’ photoshoot for Best Supporting Actress in The Fighter, which she ended up winning. Mostly, though, these are exceptions to the rule, Awards campaigning is a well-oiled machine, an industry with serious clout that works towards that one goal. Tackiness can prevail but in a post-Miramax age, I wonder if we’ll ever see such shamelessness and questionable tear-jerking tactics again. Maybe it’s for the best. Imagine if Jared Leto took out an ad claiming that the House of Gucci cast was praying for him to win more than the actual Gucci family were to stop their family member from being assassinated.


← 'Haywire' 10th Anniversary Of Gina Carano Kicking Ass And Looking Good Doing It Before She Fumbled The Bag | 5 Shows After Dark: 'The Resident' Fifth Season Winter Premiere, 'This Is Us' on NBC →