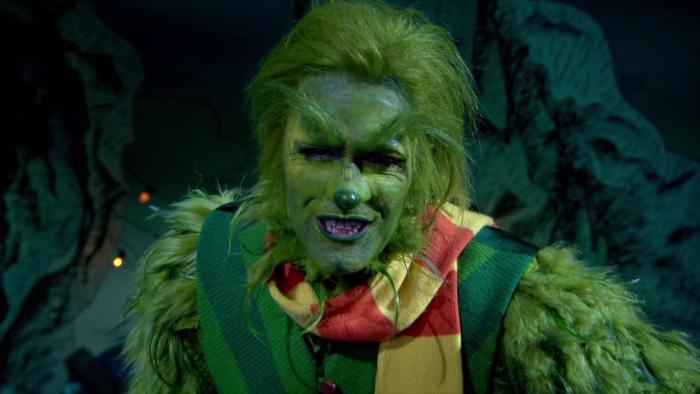 So, did anyone watch that weird live musical of The Grinch this week? NBC’s latest musical special followed in the acclaimed footsteps of productions like The Wiz with less-than-stellar results. The budget had obviously been slashed, the sets seemed to have been yanked from a local playground, and the new songs felt blatantly out of place amid the classics that generations of kids grew up with. The crowning jewel of the evening (?) was Matthew Morrison’s performance as the Grinch himself. Morrison already has experience in playing a total sociopath thanks to Glee but there was something unexpectedly bleak about seeing him covered in cheap green fur, thrusting his groin outward as he attempted to rip off Joaquin Phoenix’s performance as the Joker in a way that wouldn’t send concerned parents scurrying to a forum to complain. It was nightmare fuel that provided a natural conclusion to this hellscape of a year, but it also provided the internet with a lot of horny chat.

Can we say we’re honestly surprised about this? As Rule 34 instructs us, if something exists then there will inevitably be a pornographic version of it somewhere in the ether of our online lives. I saw people complaining that Morrison wasn’t sexy enough, and a lot of tweeters got candid about crushes on the various iterations of Dr. Seuss’s most iconic character, from Jim Carrey and Benedict Cumberbatch to the original TV special and the Universal Studios walkthrough actors. Are we in the end-times? As someone who spent a lot of the past three years writing about sexy monsters who we want to f**k for the dearly missed SYFY FANGRRLS, I felt it was my duty to take on the mantle of this quandary and find answers to that eternal question — why would we want to bone down with the mean one, Mr. Grinch? No need to thank me. It’s what I was put on this planet to do. My parents are so proud.

Theodor ‘Dr. Seuss’ Geisel was a writer and cartoonist who started out his career drawing for publications like Vanity Fair as well as ad campaigns for Standard Oil. He began working on children’s books in the late 1930s but took a break to work on political propaganda for the U.S. Army (including some SUPER racist anti-Japanese pieces that he at least regretted in his later years.) 1957’s How the Grinch Stole Christmas! was positively received by critics and enjoyed by audiences of his previous books, but it was a 1966 animated TV special that catapulted it into the stuff of festive tradition. Boris Karloff voiced the Grinch and Thurl ‘Tony the Tiger’ Ravenscroft sang the song ‘You’re a Mean One, Mr. Grinch.’ When you stick two voices that alluring into one story, it’s no wonder what followed in the interim decades.

The story of the Grinch is a pretty simple one: a curmudgeon who wants all those peppy happy kids to get off his own tries to ruin everyone’s fun but realizes that the inherent spirit of community and joy cannot be quashed, to the point where even this lifelong cynic is won over by their festivities. It’s a universal message that everyone can either relate to or understand, and as the decades passed and Christmas entertainment became more commercialized, it was only right that Seuss’s tale of rejecting such commodities in favor of simple love prevailed. All that and, despite him obviously being the villain, the Grinch is clearly a hell of a lot of fun. He’s sneaky, scathing, kind of gross, and clearly over the entire season. Every adult gets that, especially during a time of seemingly mandatory enthusiasm.

In 2000, The Grinch was turned into a live-action movie directed by Ron Howard, with Jim Carrey slathered in Rick Baker’s Oscar-winning make-up to play the lead role. Adapting a picture book whose story could be told in less than 30 minutes was always going to be tough, so Howard and company did what all desperate storytellers in need of padding did: he added a sympathetic backstory to the Grinch. He also made him the horny sex symbol. I’m not kidding: Jim Carrey’s Grinch is canonically down to f**k. Christine Baranski spends way too much of the movie’s running time fawning over his muscles, sexual prowess, and desire to ditch Jeffrey Tambor for him. The Grinch even falls into her boobs like a Benny Hill sketch! Make no mistake, Ron Howard is pure filth, and he loves it. Carrey helps a lot, of course. His Grinch is extremely Carrey-esque, reveling in his slapstick physicality and, of course, groin-thrusting. He’s also, thanks to the extended plot, clearly the smartest character in the film. He’s right! Whoville does care too much about capitalistic crap, and their about-turn in the climax falls flat because they’ve spent so long before that being selfish jerks who bullied a kid out of town and judge their neighbors for lackluster decorations! F**k those guys! So yeah, you go get yours, Christine Baranski. Let your furry freak flag fly. It’s a fascinating moment of kink in an otherwise sugar-sweet family-friendly tale.

At its (black shriveled) heart, the Grinch is a devious chaos demon who tries to spoil the sanctity of something sweet and innocent but is eventually charmed by its guileless magic. The bad boy turned good who’s still got some of that impish appeal is an old-school romance trope, albeit typically with less fur (not judging, of course, you do you.) There’s also a long and proud tradition of fans turning to the icons of their childhood for certain awakenings, as anyone who ever had a crush on a Disney prince or princess can tell you (or Trent from Daria, just saying.) How could Grinch-lust not be a thing, especially when so many adaptations seem determined to make it a thing?

So, however you celebrate this festive season, you enjoy yourself. Besides, we’re also getting a virtual reading of a new adaptation of A Christmas Carol this year, with Ebenezer Scrooge being played by Raúl Esparza. Hot Scrooge who thinks? Aw yeah, humbug, baby.

I apologize for nothing.