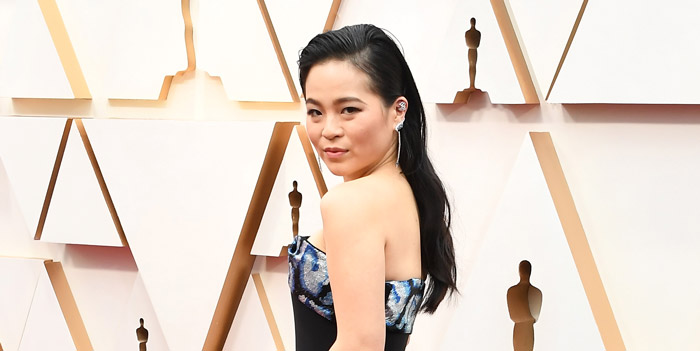 Kelly Marie Tran deserves so much better than she’s gotten. The Vietnamese-American actress rose to prominence as one of the stars of Star Wars: The Last Jedi. Then, a grotesquely toxic faction of the Star Wars fandom attacked Tran with a barrage of harassment so vile that she left social media. With Star Wars: The Rise of Skywalker, Tran fans hoped her character, Rose Tico, would step firmly into the spotlight. Nope. Disney caved to the haters, bumping Rose to the fringes of a galaxy far far away. However, now the studio is putting her at the front of their upcoming animated adventure Raya and the Last Dragon, a Disney Princess movie in the vein of Moana.

Tran stars as Raya, a warrior-princess wandering a realm known as Kumandra, where she searches for the last dragon of legend. Joining Tran as this dragon—named Sisu—is none other than comedian/heralded actress Awkafina. The Crazy Rich Asians scene-stealer is reteaming with Adele Lim, the co-writer of the hit rom-com. Lim and playwright Qui Nguyen are co-writers on this intriguing film that is inspired by Southeast Asia.

Here’s the official synopsis of Raya and the Last Dragon from Disney:

Long ago, in the fantasy world of Kumandra, humans and dragons lived together in harmony. But when sinister monsters known as the Druun threatened the land, the dragons sacrificed themselves to save humanity. Now, 500 years later, those same monsters have returned and it’s up to a lone warrior, Raya, to track down the last dragon in order to finally stop the Druun for good. However, along her journey, she’ll learn that it’ll take more than dragon magic to save the world—it’s going to take trust as well.

And here’s the first image, which features Raya and her loyal steed, Tuk Tuk, which EW reports is “an insect version of an armadillo” with the heart of a fuzzy bear.

Raya and the Last Dragon is slated to hit theaters next spring. That’s right, the pandemic isn’t stopping this Disney Animation effort, which has been developed in remote locations via Zoom calls and online collaboration. This change in production led to some shake-ups, like adding Don Hall and Carlos López Estrada to the directing team with first-time feature helmers, Paul Briggs and John Ripa. Also along the way, Tran stepped in for the recast role of Raya, which had previously been announced as Cassie Steele. This team is 400 people strong, and they are making Raya and the Last Dragon from the safety of their own homes.

As for Tran, she’s making history in the role as the first Southeast Asian actress to headline a Disney Animation production. Her directors are already singing her praises, noting that Tran’s background in improv brought a sparking spontaneity to her performance. López Estrada recalled a scene where Tran asked for a take where she could play with the dialogue. “She went for it, improvised for a minute, and had us all in tears,” he told EW. “We changed the scene and reblocked the animation so that it would follow what Kelly did that day because she just clicked on something that was so much bigger than anything we had imagined.”

Raya and the Last Dragon is set to premiere in theaters March 12, 2021.