Katie Jarvis and the Public Shaming of Working Class Actors

In 2008, 17-year-old Katie Jarvis was spotted by a casting agent after a blow-up argument with her boyfriend at the Tilbury Town train station in Essex. The casting director was looking for an actress to lead Fish Tank, an upcoming drama directed by Oscar-winner Andrea Arnold. Jarvis had no prior acting experience, and after a successful audition, she earned the role of Mia, a troublesome but isolated working-class teen who loves dance and has illicit relations with her mother’s new boyfriend, played by Michael Fassbender. The movie played at the 2009 Cannes Film Festival, where it won the Jury Prize. Jarvis’s performance was highly acclaimed. She didn’t attend the Cannes premiere because she’d just given birth to her daughter. Critics predicted big things for her, hoping she’d end up on the same level as contemporary up-and-comers like Hayley Atwell, Gemma Arterton, and Carey Mulligan. That never happened. She did a couple of short films and TV appearances but didn’t land another major role until she was cast as Hayley Slater in Eastenders in 2018. She stayed with the show for a year before leaving abruptly. Over the weekend, the tabloid newspaper The Daily Star took great joy in putting Jarvis on the front page to point out her new job as a security guard in a B&M store. The message they were sending was clear: Stop and laugh at the downfall of this actress. It’s okay because she’s working class.

Plenty of actors and public figures jumped to Jarvis’s defense on social media. Many commended her for taking a ‘real job’ and doing what she had to do to pay the bills and look after her kids. Others shared stories of the work they did in-between acting gigs and revealed the real labor behind trying to maintain a living as a working actor in this harsh business. All of these kind words were much appreciated and I was genuinely heartened to see the near-universal condemnation of this tabloid for their attempt at classist public shaming. It’s not often we find such unity in the face of obvious wrongdoing. However, I couldn’t get the sour taste out of my mouth that this story left and how it spoke volumes to a wider and more toxic problem that has taken root not only in the British acting and culture scene but society as a whole.

British film, theater, and the general world of acting is one defined by poshness. As noted by The Sutton Trust, top Bafta winners are twice as likely to have been to private schools as Brit winners, as nearly half of them were educated in fee-paying establishments, even though the independent schooling sector accounts for only 7% of school kids in England. We see this domination of privilege in almost every field in Britain, be it politics or sport or journalism, but it’s most visible to us through the pop culture we consume. We fetishize a particular vein of Britishness and sell it as the default mode to the rest of the world. The ideal British actor is almost exclusively white, typically English (but never from the Northern regions; always London-based or adjacent), educated privately and a graduate of drama school, and with an accent so clipped that it could cut glass. When we talk of British actors, we’re still primarily shilling a polished persona of posh white men who wear cravats and recite Shakespeare from memory. That doesn’t exactly leave a lot of room for working-class actors, assuming they can even get a foot in the door in the first place.

One of the reasons classism is such a smothering structure to live under as a working-class person is that the world instantly imposes limitations on you. This isn’t just an issue of attitudes, although that is a very real problem, but of systemic privilege. Fee-paying schools invest heavily in extra-curricular activities like drama in a way my school never did. We never had the facilities to mount lavish theatrical productions. Acting and being involved in the arts seemed like such an impossibility to my adolescent self, and that doesn’t even include the ways teachers actively discouraged us from applying to certain universities that were seen as out of our league. Don’t bother with those dreams. Those doors aren’t open for you.

I think a lot about the opportunities that would have been open to Katie Jarvis had she had what our classist society has deemed ‘the right upbringing.’ We expect actors to go to the ‘right schools’ and schmooze with the ‘right people’ and that almost entirely excludes the working classes. Indeed, it’s partly designed to do so. Imagine if she’d been at a school with an excellent drama department that had noticed her natural skills the way Andrea Arnold’s casting director had. Think of the great roles she could have been offered if she had those people in her corner. Instead, Britain sees a working-class actor and thinks ‘soap opera’. This is not to denigrate Eastenders, which is a genuine cultural institution in Britain, but it speaks to those endless limitations the working classes are burdened with.

Jarvis has been shamed for not being how society characterizes actors. The idea we have of this dream is that once you’ve made it, you’re set for life. You starred in one highly acclaimed indie movie so of course you’ll be rolling in it and never again have to worry about paying the bills. As many actors on Twitter reminded us, that’s seldom the truth. You scrape by on the occasional gig then go back to cleaning offices or temp work or literally any job that will keep you going until you can land another audition. Being a jobbing actor is an endlessly precarious occupation, one that seldom commands public respect because it’s seen as the domain of monied luvvies. Then again, when the only image we want to sell the world of British acting is one of the upper classes, people who have financial safety nets at every turn, can we really be surprised that our optics are so skewed?

ALL actors (well most) have to have their ‘other’ job. This article has upset so many in our industry today (with good reason) be proud of all that you do and that you make it work for you. What are your other jobs? Mine: fitness coach, PT, support worker, illustrator, voice over https://t.co/9FwvFHYdtu

I hope Katie Jarvis is happy and ignoring all this cruel press. She’s doing what a lot of people wouldn’t have the nerve to do and she’s looking after her family while vultures try to turn her into yet another ‘acceptable working-class scum’ target. We’ve seen this cycle all too many times before. The suffocating force of inequality continues to splinter Britain even as the privileged powers that be try to force an image of unity built on a monolithic version of Britishness that represents only the tiniest percentage of the population. The way Jarvis has been treated is but one reminder of that. Let her be and perhaps we can work harder to ensure that working-class kids don’t feel like their dreams aren’t worth chasing.

Have you seen Fish Tank? You should watch Fish Tank. 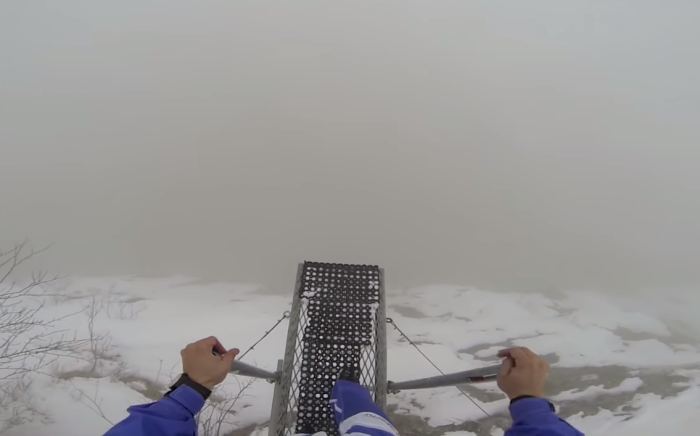 It's Monday. Dive Into Your Week Like This Dude BASE Jumps Into This Fog

Ronan Farrow Mentions Hillary Clinton in His Book so Clearly Tulsi Gabbard Is Innocent, That's How Things Work! (It's Not)