The following post discusses the Joker’s ending, and as such contains major spoilers for the film. You have been warned.

Did the Joker kill Sophie? Since Todd Phillips’ controversial film hit theaters, this has been a big question debated by fans and detractors alike. Here at Pajiba, Roxana and I discussed the context clues of Joker, and came down on different sides of this debate. Then, Phillips himself weighed in as the film’s co-writer/director to try to bring a close to the question. He told IndieWire, “[Joker] doesn’t kill her, definitively,” then went on to describe a cut scene that would have confirmed her survival.

That cut scene is included in the For Your Consideration Joker script that Warner Bros., which was sent out for award season. However, there are some hints that Sophie’s fate isn’t so clear cut.

In the film’s theatrical release, the last we see Sophie is when Arthur comes to her apartment for some consolation. By this point, we’ve seen the two flirting at his apartment door, yucking it up after his bomb of a stand-up performance, and grieving together bedside in his mother’s hospital room. In a Gotham that treats Arthur like trash, Sophie’s kindness is his ray of hope. Then comes this scene, where it’s revealed she barely knows the man. “You’re Arthur, right?” she asks when she finds this flustered home invader on her couch, “You live down the hall.”

Next, a burst of flashbacks reveals Arthur’s delusion - he was alone the whole time, imagining the dream girl who laughed at his jokes and offered a shoulder to lean on. In the film, Sophie backs away as Arthur approaches her. He makes a gun gesture with his fingers, recalling their shared joke from their elevator meet-cringe. We aren’t shown what happens next. Instead, Phillips cuts to the hallway, where Arthur walks back to his apartment. It’s not a match cut - we didn’t see him move to the door of Sophie’s apartment. So, what happened in between?

The script offers no additional details in this scene. However, the script offers three more references to Sophie that aren’t in the final film. The first comes after Arthur has killed his co-worker, Randall. He pulls the dead man’s wallet out of “blood soaked pants” [sic] and takes all the cash inside. Then, Arthur places the money inside an envelope with a note that reads ” …on Murray Franklin Tonight — Pleese Watch!” [sic]. On the front of the envelope, Arthur writes “SOFI.” [sic] Finally, he emerges from his apartment in his full Joker regalia, heading toward Sophie’s apartment door. There, he lays down the envelope and “his magic wand of flowers” before going to do the dance on the stairs to Gary Glitter’s “Rock n’ Roll, Part 2,” which is specified in the script.

The final scenes of Sophie reveal her watching Franklin’s late-night talk show. The first is a cutaway to her reaction of Arthur’s confession to killing the three Wall Street guys on the subway. 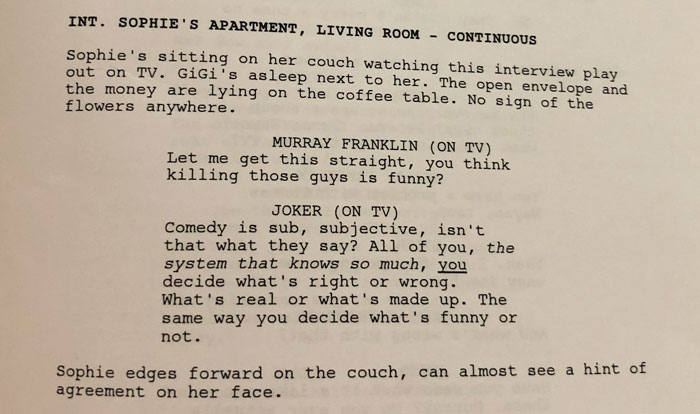 The last is her reaction to Arthur’s execution of Franklin. 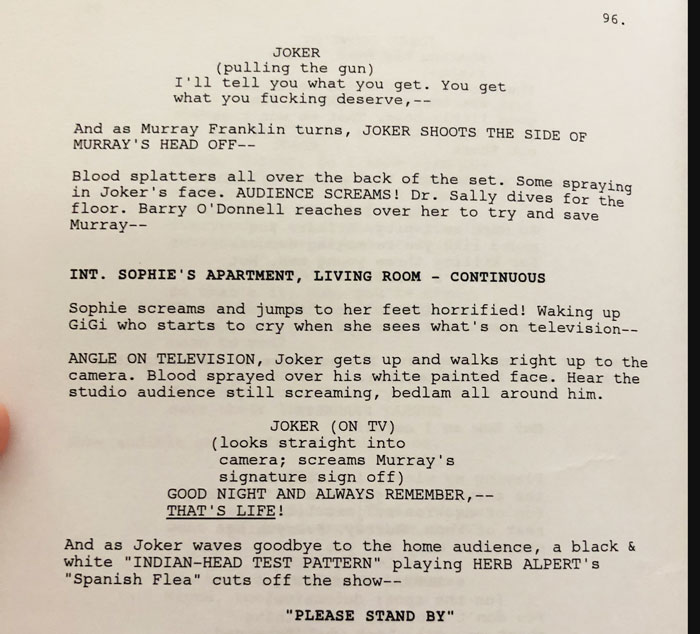 At face value, these scenes suggest Arthur left Sophie alive, then he gives a gift of money and flowers to entreat her to watch his big moment. But are these scenes “real” or more of his fantasy? After all the pair’s entire romance—and 90% of Sophie’s screen time—was in his head.

In the script, Phillips and co-scribe Scott Silver never note that a Sophie scene is a delusion or real, so there’s no hard evidence either way in that regard. However, there is an echo of Sophie’s imagined behavior seen in the above. She seems to support Arthur’s slaughter of the Wall Street guys, which calls back to his imagined conversation with her, where she says, “I’ll bet you five bucks those rich assholes deserved it.” She’s also accepted his gift and tuned in to see him on TV, despite the fact that he’s broken into her home and scared her. What more could Arthur dream of?

However, there are elements that don’t align with Arthur’s dream scenario. For instance, there’s no sign of his flowers, which might suggest she’s rejecting his romantic advance. She might be intrigued by his subway spree kill, Sophie is “horrified” by his murdering of Franklin on live TV. Would that be what Arthur hoped for? Perhaps—as Phillips said—this scene is not a part of Arthur’s delusion. Considering how little Joker actually tells us about who Sophie is outside of Arthur’s fantasy, it’s hard to determine what was intended and what might be Phillips’ retrospective PR spin. Yet there is one last hint in the script that suggests Sophie is truly alive.

When arguing in favor of “Joker killed Sophie,” I referenced the film’s final shot.

“My main argument is the other murder Joker chooses to keep off-camera, that of the Arkham psychiatrist in the penultimate scene. We don’t see Joker kill her either. Instead, we see him walk away from their conversation, just as we did with Sophie. But this time his footprints tracking blood.”

In the final page of Joker’s FYC script, there is no blood. So perhaps the psychiatrist isn’t dead. Perhaps the blood isn’t real. Perhaps the joke is really on us. 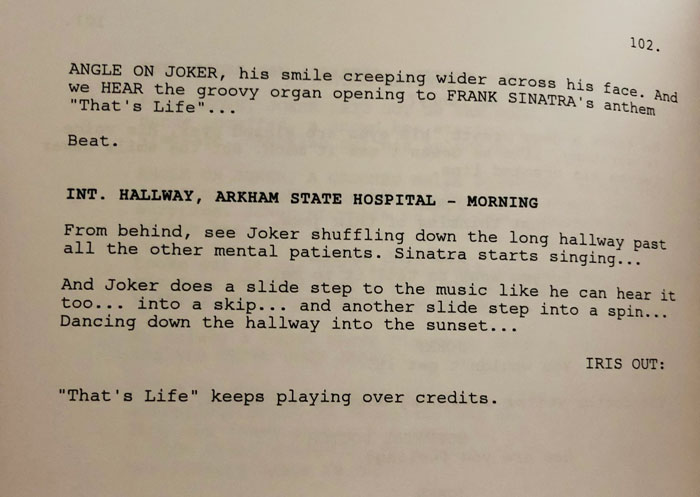 Joker is nominated for 11 Academy Awards including Best Adapted Screenplay and Best Picture.