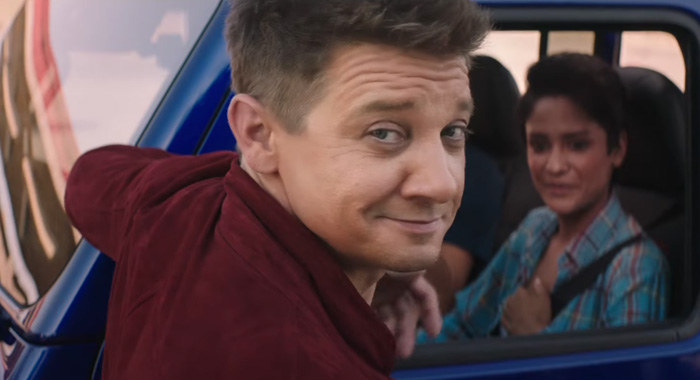 Everyone Chill, Relax, Jeremy Renner's Got This Spider-Man Business

Yesterday, the entertainment world sh*t its pants over the news that Marvel Studios and Sony are done sharing Spider-Man, because sometimes it helps to get overly invested in corporate profits instead of watching “Antichrist” trend on Twitter as the president declares himself the King of Israel. (We’re all gonna die.) Anyway, the Spider-Man news shouldn’t have come as a total surprise because there were rumblings of the deal going south coming out of Comic-Con. However, this recent implosion confirmed that Sony and Marvel have been at the table to keep their relationship going, and it didn’t take long after the bomb was dropped for sources to hint that we’re witnessing run-of-the-mill, swinging d*ck brinkmanship that will ultimately be resolved. Or not! Who knows? Sony does seem very determined to take its Spider-Man balls and rub them all over everything it owns.

But that was before a dark horse entered the fray. A steel-mounted warrior who flings righteous hashtags like a Cupid from hell. A cold sonofabitch with two left eyes and a Jeep Cherokee full of justice. I’m talking, of course, about Jeremy Renner.

Hey @sonypictures we want Spider-Man back to @therealstanlee and @marvel please, thank you #congrats #spidermanrocks #🏹 #please

Remarkably, Sony didn’t immediately drop the rights to Spider-Man and high-tail it out of town, but if they’re itching for a showdown, well, Jeremy Renner has other tricks up his sleeve.

While most people struggle to form a single creative thought, Jeremy Renner possesses the uncanny gift to write a single word — one solitary word — right smack in the middle of a piece of notebook paper, which seems kind of wasteful, but shut up. He also has the gift to imagine a beautiful woman stealing his car while he dances in the desert in a trenchcoat.

I’m not going to joke around here. You don’t f*ck with that.

Unlike Sony, Jeremy Renner knows that sharing is caring. If he borrows your car, you sure as shit know he’ll let you borrow his. Yes, he’ll drive yours right off the road then leave it parked in the desert while he dances to his own music like a goddamn Scheana from Vanderpump Rules, but everyone knows that’s how “Jere” rolls. Strutting out of diners and not knowing how roads work. BRAP BRAP.

Telling Ties to F*ck Off

Jere has to make a lot of fancy appearances. It’s not who he is, but you gotta play the game to win the game even if it’s by your own rules that took 47 notebooks to write. So when it’s quittin’ time, there’s nothing The Jere loves more than dropping his tie on a tray of drinks because that’s not going to confuse the hell out of some poor waiter. “Great, whose expensive-ass shit is this? If I get fired over a bowtie, I swear to god…” It’s the power move to end all power moves.

(Was this whole thing an excuse to make fun of Jeremy Renner’s Jeep commercials? Let me check the single word I wrote in the middle of a Gutenburg Bible: YUP.)